Numbers     Largest and smallest numbers:   Place Value of each digit in a number: In a four digit number, there are four places named: Ones place. Tens place. Hundreds place and Thousands place. Ex:

This is the "equal to” sign. When we use it between two numbers, it means that the numbers on both sides of the sign have the same value. Ex: 53 = 53

This is the "greater than" sign. It is placed between two numbers in such a way that the open side is towards the bigger number. Ex: 43 > 34

This is the “less than" sign. It is placed between two numbers in such a way that the closed side is towards the smaller number. Ex: 57 < 69 Rules for comparison of numbers: Rule 1: A numeral containing more digits is greater. Ex: 163 > 35 Rule 2: If two numerals contain the same number of digits, the numeral having greater digit at the left most place will be greater.

Rule 3: If the left most digits are also the same, we go to next digit from left and compare.

Addition and Subtraction   Concept of Zero: Example: 243 + 0 = 243 Addition: Addition of 3-digit numbers without carrying: Example: Add 376 and 213 Solution: Step- 1: Arrange the numbers according to their proper place values.

Step-2: Add the ONES first, then the TENs and finally the HUNDREDS.

Example: Add 498 and 376 Solution: Step-1: Arrange the digits of the numerals in proper places.

Subtraction: Subtraction of3-digitnumbers without borrowing: Ex: Subtract 652 from 956 Step - 1: Arrange the numbers according to their proper place values.

Step-2: Subtract ONES first, then the TENS and finally the HUNDREDS.

Ex : Subtract 652 from 831. Step-1: Arrange the numbers according to their proper place values.

Division   Division: Equal - sharing: Ex : 1 have 12 apples with me and I want to distribute them equally among 3 boys. How many apples will each boy get? Step - 1: Give 1 apple to each boy.

Description of some basic shapes: 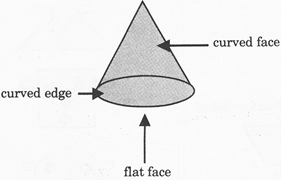