Here we have made three groups in coded letters & changed a series. Similarly, 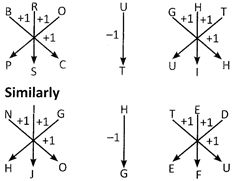 In the given code, continuous letters are added are step and two steps alternatively in forward order. Similarly,

Direction Test   Learning Objectives   Introduction In this test, the question consists of a sort of direction puzzle. A successive follow-up of direction is formulated and the candidate is required to ascertain the final direction or the distance between two points. The test is meant to judge the student ability to trace, follow and sense the direction correctly.     Concept of Direction In our day to day life we form our concept of direction after seeing the position of the Sun, In fact, it is a universal truth that Sun rises in the East and goes down in the West. Thus, when we stand facing sunrise then our front is called East while our back is called West. At this position our left hand is in the northward and the right hand is in the southward. Let us see the following direction map that will make your concept more clear. Direction Map: 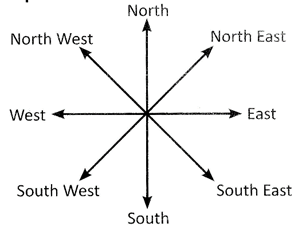 Syllogism Learning Objectives   Introduction “Syllogism” is a Greek word that means inference or deduction. In ‘Reasoning’, syllogism is a kind of logical argument that applies deductive reasoning to arrive at a conclusion, based on two or more propositions that are asserted or assumed to be true. The problems of syllogism is based on two parts: (i)   Proposition (ii) Conclusion/conclusions drawn from given proposition/propositions.  Proposition A proposition is the statement of a certain relation between two or more terms. (a) The subject (b) The predicate   In the proposition, “All novels are songs”, something is being said about ‘novels’. So ‘novel’ is the subject. ‘Song’ is the predicate here, because it affirms the statement about the subject.   Classification of Propositions 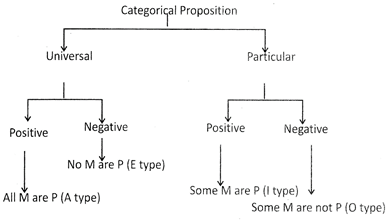 Thus, a positive sentence with a more...
Catgeory: 11th Class

Inserting Number Test Learning Objectives  Inserting the Missing Number In this chapter questions contain a figure, a set of figures, an arrangement or a matrix, each of which bears certain characters, be it numbers, letters or group/combination of letters numbers which follow a particular pattern. You are required to identify and decipher this pattern and accordingly find the missing character in the figure. Direction: Find the missing character from among the given alternatives.  1.

Logic Venn Diagram Test Learning Objectives   Introduction This section deals with questions which aim to analyse a candidate's ability to relate certain given group of items diagrammatically. Here are some different types of Venn diagrams with their implications made clear.   Type - 1st   Directions (Question 1 to 10): Each of the questions below contains three elements. These three elements may or may not have linkages. Each group of the elements fits into one of the diagrams given at (a), (b), (c), (d) and (e). You have to find out the diagram that fits for the elements given in questions. (a)

Potato and Cabbage are entirely different, but, both are vegetables. 2. Table, Chair, Furniture Ans.     (b) Explanation:

Table and Chair are entirely different, but, both are a part of furniture. 3. Week, Day, Year Ans.     (a) Explanation:

All thieves are criminal But judge is different. 5. Husband, Wife, Family Ans.     (b) Explanation:

Husband and Wife are entirely different. But both are parts of a family. 6. Square, Rectangle, Polygon Ans.     (a) Explanation:

All squares are rectangles. All rectangles are polygons.   7. Bus, Car, Vehicle Ans.     (b) Explanation:

Bus and Car are entirely different. But, both are vehicles. 8. Anxiety, intelligence. Strength Ans.     (c) Explanation:

Anxiety/ Intelligence and Strength are entirely different from each other. 9. House, Bedroom, Bathroom Ans.     (b) Explanation:

Bedroom and Bathroom are entirely different. But, both are parts of a house. 10. Mustard, Barley, Potato Ans.     (c) Explanation:

Mustard, Barley and Potato are all separate items/ entirely different from each other. Commonly Asked Questions Directions: In the following questions, three classes are given. Out of the five figures that follow, you are to indicate which figure will best represent the relationship amongst the three classes. (a)