Soil is the uppermost layer of the earth's surface which is made up of the particles of rocks, humus, air and water. Soil contains nutrients and water for the survival of plants. The product, after the process of photosynthesis is glucose, which is made by the plant in the presence of carbon dioxide and Sun rays. The leaves of the plant trap Sun rays and carbon dioxide from the atmosphere. The other necessary nutrients such as, water and minerals are absorbed by the root from the soil. Therefore, the growth of the plant depends on the quality of soil. 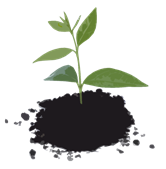 Soil is formed from rocks by weathering. Rocks are broken down into small pieces due to heat of the Sun, wind, snow, rain and natural events like earthquakes to form soil. Soil formation as well as fossil fuel formation is a very slow process. It takes millions of years to form particles of soil from rocks. Roots of few plants can also break rocks by penetrating deep into the space of rocks.

Weathering of rocks due to flowing water 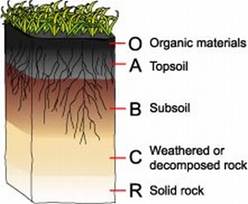 Top soil or A-horizon is dark in colour and rich in minerals and humus. This layer is soft, porous and can retain water. Plants grow in this layer. This layer is beneficial for worms, beetles, rabbit, rats and moles as it provides shelter to these organisms. Sub soil or B horizon lies below the top soil. It is grey or red in color. It is comparatively harder and made up of hard broken pieces of rocks. A type of rock which is called Bed rock is found below the surface of the earth. Bed rock consists of hard non porous rocks. 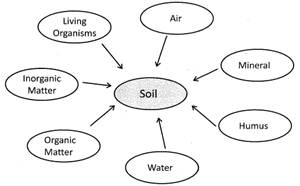 Residual soil: Soil which remains at the place of its formation.

Mountainous soil: This type of soil is found in mountainous regions, formed by clay, shale, limestone and sandstones.