The rock cycle involves the formation, alteration by weathering and then formation of rock again. All the process occurs simultaneously. 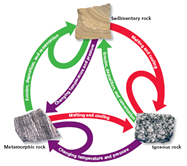 Weathering of rocks takes long time. After weathering, rocks are converted into soil.

A mineral is composed of an element or a chemical combination of elements. For example, Silica is a mineral made up of oxygen, silicon and a small amount of other elements. 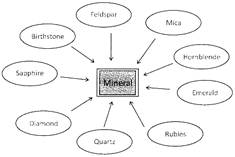 Gemstone is a naturally occurring beautiful and attractive mineral which has immense demand in jewellery making. These minerals are cut and polished for making the jewellery.

Useful minerals are not in huge quantity. They are available in limited quantity hence they are recycled from scrap.

Metals can be recycled again and again from scrap without degradation of its properties.

Difference between mineral and Rock

Petroleum is formed when plants and animals in the sea died millions of years ago and formed a layer of sediments one after another. Petroleum trapped solar energy in the form of chemical energy which when burns produces heat and light energy. Petrol, diesel, kerosene, LPG, etc. all are petroleum product used as a fuel. 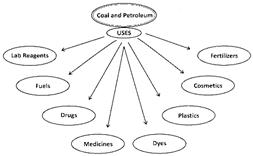 Conservation of Coal and Petroleum

These non-renewable sources of energy would exhaust very soon if not conserved. Petroleum will last for only 40 - 50 years and coal would last for about 250 years.

Fossil fuels burn and release CO2 in the atmosphere which causes global warming hence, they should be less consumed.

The lithosphere of the earth consists of which one of the following types of matter?

(a) Soil and rocks

The lithosphere of the earth is consist of soil and rocks.

Therefore, option (a) is correct and rest of the options is incorrect.

Which one of the following is a factor of weathering of rocks?

Strong wind, flowing water and glaciers all are the factors of weathering of rocks. Therefore, option (d) is correct and rest of the options is incorrect.

Rocks may be crushed and folded to form features such as mountain ranges.

th of all the gold produced in the world each year comes from South Africa.

Diamond is the hardest substance in nature. It is used in industry for cutting.

One drop of water is made of millions of water molecules.

Coal and diamond are made up of the same element, i.e. carbon.

There are three states of matter, solid, liquid and gas.

Intermolecular force in solid is strong as compare to gas and liquid.

Most of the disease spread through polluted water.

Overgrazing of animals at a piece of land causes soil erosion.