Remember There are double contractions too! For example she'd've for she would have.     LERANING OBJECTIVES This lesson will help you to ·        QUICK CONCEPT REVIEW                 Contractions are words that are put together to form a smaller word. But they mean the same; the meaning of the two words does not change. In contractions an apostrophe takes place of the missing letter. Like for example; should have is contracted to should've. The lion should have gone on a prowl can also be written as the lion should've gone on a prowl.

For example: I am thinking can also be written as I'm thinking. 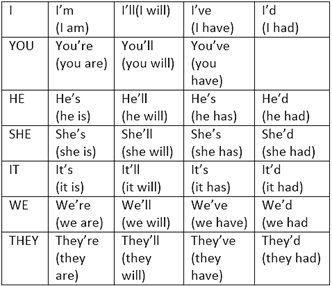 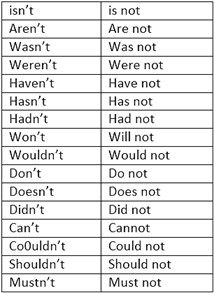 Amazing facts Though in most of the words when they are contracted the first word remains the same but in will not, it is not contracted to wills? the word changes to won't  Words that ask a question are called interrogative words words. For example where, how, why, who, what.     Interrogative contractions

Remember Sometimes you need to revise a sentence to make sure that you have used the correct conjunction.   Suggested activity Make flashcards of different connecting words. Write two sentences and try to connect them through the connecting words.     LEARNING OBJECTIVES         This lesson will help you to    QUICK CONCEPT REVIEW   Conjunctions are also called connecting words. We use Conjunctions to join words and sentences to make a meaning out of them. Conjunctions do not have any other purpose than joining the words and sentences. And, or, but, when, before, while, and after are words that are used to join sentences. For example: And is used when we want to tell more. And is used when we want to express similar ideas. For example; I can read. I can write. I can read and write.

Before is also used to tell about relative timing of two events. For example; before I could balance myself, I fell.

Before I could balance myself I fell.
Catgeory: 2nd Class

Amazing facts No articles is used before an uncountable noun. Uncountable nouns are nouns that cannot be counted like sand, milk, sugar. Though we can say a glass of milk. We cannot say a milk.     LEARNING OBJECTIVES This lesson will help you to ·    Quick Concept Review As you know there are 26 alphabets in English. Out of them there are only five vowels, rest all are consonants. The five vowels are. a e, i, o, u. We use I articles such as a', an' or 'the. A is used before the words that begin with a consonant sound. For example a boy, a girl, a cup. A clock, a butterfly, a star.

'The' is used before some particular person or things. For example The Himalayas, the Bible, the Sun.

A and an suggest any person or thing. The suggests a particular person or thing. For example: A tree (any tree). The tree that is near my house. No article is used before proper nouns. For example Mr Smith is very hardworking. Snoopy is the name of his pet dog.     Remember
Catgeory: 2nd Class

Playtime You can make placards of different position and hide different things places. One of you will become the den who will look for things at places you show placards for example you can hide an apple in a vase and can show ?in? the ?denner? will look for things fix up any 10-20 things where you will hide things.     LEARNING OBJECTIVES This lesson will help you to    QUICK CONCEPT REVIEW Prepositions are also known as Where words. They tell us about the position and time of Of person or a thing. Here are some common prepositions. At is used for small towns, as well as time For example I will leave at 5 in the evening Words like on, at, by, for, past tell us about time For example: He left at half past twelve.

Among is used when we talk of many objects or people. For example: He is among the best students of the school.

He is among the best students of the school Between is used when we talk of two things or people. For example: The Police Van got stuck between two buildings.

A police van stuck between two buildings.     By is used when we talk of a person doing something. For example: He is going by car.

Suggested activity You can show a picture and ask the child how things are placed in that picture.     Remember The preposition ?with? is used in different ways. It is used to show ?using? for example: tom is playing with his ball. With can also be together with or in company of. With is used when we talk of a tool used by a person. For example; A boy writing with a pencil. With can also be used to show company of. For example: Sheena went for cycling with her friends.

We use Since when we talk of a fixed time. We use for when we want to show a period of time. For example. For how long have you been working here? Besides means addition to. For example: Besides he was quite hungry. Beside also means by the side of. For example: more...
Catgeory: 2nd Class

Remember When we add 'ly' to a word it becomes an adverb. For example slow becomes slowly.     Amazing fact Though most of the adverbs end with a 'ly' but there are some that do not end with 'ly' for example today     LEARNING OBJECTIVES This lesson will help you to   QUICK CONCEPT REVIEW Adverbs are words that tell us something more about a verb or an adjective. Adverbs give us more information about a word and also change it slightly. For example when we say that a boy suddenly started running. The word suddenly tells us how the boy started running. Adverbs answer the following questions ·      Adverbs of How tell us how the action is done. For example the car ran jerkily on the road. How did the car run? The cat came into the room slowly to catch the mouse. How did the eat come? The words jerkily and slowly tell us how the action is being done.

Remember Adjectives in comparative degree also use or less before them. Like beautiful becomes more beautiful.     LEARNING OBJECTIVES This lesson will help you to    DEFNITION Adjectives are describing words. They help in Knowing more about a noun. Words such as fat, beautiful, good, bad tell us more about any noun or a pronoun.     QUICK CONCEPT REVIEW We all know that adjectives are describing words. A word that tells us more about a noun or a pronoun is called adjective. For example in the sentence A thin Man, the word thin tells more about that man apart from the fact that he is a man. Take another example where we see a cat, we say that the cat is cute, the word cute tells us more about that cat or we can say it helps us to know more that particular cat. Or when we say an angry man we mean that the man is angry.

Adjectives can also be used to compare two or more people, things or feelings. When we compare two things it is called comparative degree. We add ?er' to the word like *cold' becomes 'colder?

In some cases where the adjective ends in a Y we replace Y with 'ier?. For example. Nasty becomes nastier. When we use adjectives to compare more than two people or things or feelings, it is called superlative degree. We add 'est? to a word to make it superlative degree.     Playtime   Amazing Fact
Catgeory: 2nd Class

Real life example   LEARNING OBJECTIVES This lesson will help you to   DEFINITION The words that tell us about an action or words that show that some work is being done are called action words, doing words or Verbs. Dance, paint, smile or read, they all show that some action is being done. Verbs are an important part of a sentence.

QUICK CONCEPT REVIEW When you find yourself confused whether a sentence, has an action word or not, look at all words in the given sentence and ask yourself "is this something !that o person or an object can do"? For example: A boy is reading a book. Here the word reading is a verb or an action word. It suggests that an action is being done. If a verb is not used in a sentence the sentence seems to be incomplete. For example when I say "I will school". Does it have any meaning?          Now let us add' go 'to it, and write it as "I will go to school" We find that just by adding an action word to the whole sentence we are able to add meaning to a sentence. There are two forms of verbs. Doing words and Being Words. Doing words are words that tell us about some action taking place. For example. Jumping, Pulling.

BEING VERBS Being verbs do not denote any action or doing, but they link the subject to the verb. The most common linking verb is to be To Be: The various forms of it being, am, is, are, were, was, being, will be, has been.     Remember

Remember The name of the object or the subject has to be mentioned first, so that the reader has an idea about what you are talking about.     LEARNING OBJECTIVES This lesson will help you to    QUICK CONCEPT REVIEW We all know that pronouns are words that are used in place of naming words. For example: I, She, He, You, are used for one person whereas. We. They, and You are used for more than one person. It is used for animals, places and things. There are:

Think The nouns that do not denote either female or male gender are called neuter gender. For example shoe,     LEARNING OBJECTIVES This lesson will help you to ·     QUICK CONCEPT REVIEW Nouns are naming words. The name of a person place or thing is called a noun. Everything around us has a name like the Chair you sit upon, or a place that you go to study, is known as a school.

Common Nouns: names given to common things around you like dog, cat, .school, mat are called common nouns.

Collective nouns: nouns that tell us about a group of things are called collective nouns. For example: a bouquet of flowers, a flight of steps, 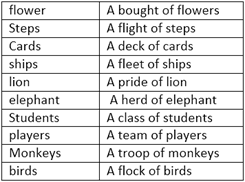 Singular nouns: singular nouns are names given to single things. For example a flower, a box

Plural Nouns that are more than one in number are called plural nouns. Singular nouns can be changed into plural by:

Plural Possessive Nouns: Plural possessive nouns tell us about ownership by more than one person like Boys books, Girl's room. Countable Nouns: A noun is countable if it can be counted like one biscuit, two biscuits. Countable nouns can be singular as well as plural. Uncountable Nouns: A noun is uncountable if it cannot be counted. more...
Catgeory: 2nd Class