1.            With the growth in industries and the shrinking of agricultural income, people are migrating from rural areas to urban areas.

2.            About a quarter of India's population is urban as there are many opportunities for jobs here.

3.            People in towns and cities are involved in manufacturing and in selling and service sectors, i.e. in secondary and tertiary occupations and in primary occupation like farming.

Raman, a student of class VI lives in a multi-storeyed building in New Delhi. Every morning, the milkman visits their house to deliver milk and a vendor drops newspaper at their door step. Soon after, Bitti bai arrives. Bitti bai is a domestic help. Both his parents are doctors. Raman gets ready for school and his driver Ramesh drops him by car. Sometimes Raman walks to school. On the way he crosses a market. There are many shops with shopkeepers selling all kinds of wares and services. Often a rickshaw puller approaches Raman to offer him his services. Raman crosses the market road carefully. It is a busy road. Life in a city is busy and fast and everyone is in a hurry?the office-goers, school children, vendors.

Many towns and cities grow with time. With the growth of industries and shrinking of agricultural land, millions of people move to cities and towns to seek employment every year. The movement of people from rural areas to urban areas is called migration. Often people are lured to migrate to urban areas as unskilled daily wage earners by the development projects in urban areas. Having moved to the cities, the migrants generally settle in the poor areas of the city streets. These areas?usually lack basic infrastructure facilities?electricity, water and drainage. In course of time these areas develop into slums. Thus, slum dwellers are the urban poor?the daily wage workers, casual labourers, domestic servants, rickshaw pullers, hotel boys, etc. At the same time, highly skilled and educated people also move from one city to another in order to get better opportunities. They are mostly well paid too. Thus, movement is there in skilled and unskilled segment. Sometime high officials are placed in rural areas for looking after their projects or industries there. But mostly people tend to move from rural area to urban area in search of a better life and livelihoods.

Migration of people from rural areas has put heavy pressure on the civic amenities in the towns and cities. This trend can be reversed by creating adequate employment opportunities for the rural people in the rural areas.

Reasons for rural to urban migration are:

? Lack of educational and health opportunities.

? Seasonal agriculture due to erratic rains.

? Lack of consistent income through agriculture.

The milkman who delivers milk at your house is self-employed while the domestic help and the driver who are hired earn fixed salaries. However, all of them earn low wages. The shopkeepers and vendors are self-employed. The shop owners of big shops earn more money than the vendors. The rickshaw pullers are either self-employed if they own the rickshaw or they earn daily wages. Their earnings vary from day to day. Raman's neighbours have regular employment. This is because of their qualifications and skills. They earn good salaries or do profitable business which enables them to live a good life.

Today there are more than a crore workers on the streets. Vegetable vendors, cobblers, florists, barbers and push cart owners?work on streets. You might have also come across a few such people at traffic crossings. They may be seen hawking in railway stations, near tourist places or temples as well. Some people set up makeshift shops and sell their goods. These people do not have a licence from the Corporation to run the shop and their shops block the traffic. Hence, police dismantle their shops any time. They then carry their wares in carts or bags to another location. However, today the government is working at providing vocational training and fixed places for street vendors, so that they can also lead a life of dignity.

in a market. The permanent shops have shutters while temporary ones on the roadside are covered with canvas cloth.

Those who own a shop are self-employed. They sit at the shop themselves or employ salespersons and workers. People work in shops and showrooms as managers, cashiers, shop assistants, peons, cleaners, watchmen and so on. The Municipal Corporation has given them a licence to run a shop. 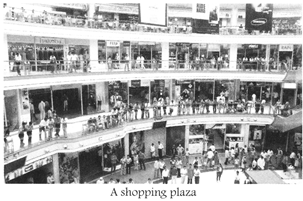 Industries manufacture a variety of products such as plastic goods, garments, footwear, electronic goods, paper, machinery, textiles, etc. These industries employ thousands of people. In some industry, like the iron and steel industry, the manufacturing process goes on non-stop. In such places people work in shifts. There are three shifts of eight hours each day. Amardeep runs a garment shop in the local market. He is an entrepreneur. He has rented the shop from a real estate person. He sells readymade garments as well as offers tailoring services at his shop. Amardeep gets the garments stitched in his factory. He buys cloth and other accessories from the wholesale dealers. Amardeep realizes that there is a huge demand for branded garments. So now he is trying to obtain franchise of a well-known brand. If he gets the permit, he will revamp his shop. This will attract more customers. Amardeep wants to earn enough money to buy his own shop.

Shanti is a salesperson at Amardeep's shop. She works at the shop from Monday to Saturday. The shop is closed on Sunday according to the Municipality regulations. She attends to the 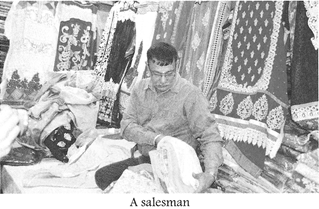 customers and displays dresses, quotes their prices and later folds the garments neatly. She prepares a kuchha bill and gives it to Amardeep. Amardeep verifies the bill with the price tag and prints a proper bill. Amardeep gives Shanti a monthly salary. He also gives her a bonus on Diwali if the shop makes a good profit.

Rakhi is a factory worker in Amardeep's factory (karkhana). She works in the day shift, every day. She stitches the clothes and prepares readymade garments. She stitches frocks and dresses for the summer collection, and coats and trousers for winter. Amardeep pays Rakhi daily wages. Rakhi earns Rs.500 for 8 hours of daily work. She often does overtime to earn more money. 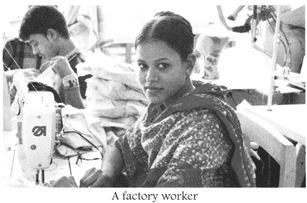 Offices are rim for the service sectors such as construction industry, retailing, automobile, hospitality, banking, insurance, telecommunication, etc. Some offices are run by the government, while others are private concerns. Offices can be big with hundreds of people working there or very small with just a few people in a one-room setup. Some offices even have branches in different cities and towns. People work in the different departments of these offices. The office departments include sales, HR, accounts, etc. Managers supervise the work in an office while the clerical staff does the work. Peons carry messages and folders. A major source of employment in cities these days is the Business Process Outsourcing (BPO) unit. Many foreign companies outsource some of their processes to the BPO industry. Call centre is a unit of a BPO. It handles large volumes of information telephonically. Besides these, there are hospitals, banks, post offices, educational institutions and various other institutions where people can find jobs. 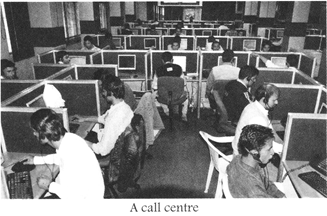 Rohan is the manager of a bank. His office is located in an area where there are many other offices. He works from 9 am to 5 pm, Monday to Saturday. He has a holiday on Sunday. Rohan is responsible for the daily operation of the bank. He ensures that the bank's staff works well. He is responsible for bringing in new customers and boosting profits. He hires new staff and trains them in the bank?s procedure for handling money. Rohan is courteous and handles the customers? complaints tactfully. He also cross- check the daily transactions of the bank.

Rohan gets a fixed salary every month. He is a permanent employee. He has opted for the Provident Fund Scheme. Under this, he income. Thus, he is saving for his retirement period. Rohan can avail casual leave (CL), and medical leave (ML). He can also take annual leave and go on a vacation. Rohan?s benefits include bonus, subsidized loans, pensions, etc. even though the urban areas offer so many facilities, occupational opportunities and lucrative lifestyle, these areas are not free from problems. Urban areas witness lots of problems in terms of congestion, sanitation, population pressure on civic amenities like public transport, infrastructure, environment, etc.