Key Elements of a Democratic Government

3.            The main features of a representative democracy are: free and fair elections, Adult Franchise, rule of constitutional law and protection of citizen?s rights.

4.            In India, the general election is held every five years and there is an alternative government available in case the electorate desires a change.

5.            People express their opinion about government policies through media or by organizing rallies and hartals, thus making government accountable to the public.

6.            Equality and Justice are the two elements that make a democracy successful.

KEY ELEMENTS OF A DEMOCRACY

Key elements of a democracy include:

Athens, a city- state in ancient Greece, became the first democracy around 600BCE. When the ruler Draco, Organised laws by putting them in a written code. Solon the next ruler set up an assembly to meet forty times a years to discuss and vote on issues this assembly was made up of 500 men. Athens was an examples of direct democracy.

Participation means 'taking part in' or 'being involved in' something. Say, you are excluded from participating in the Annual Function of your school for some reason. How do you feel? Bad, awful?anything but good. Similarly, a government where people have no say in their affairs cannot be enjoyed by them.

In democracy, free and fair elections are conducted for choosing representatives to the government. People participate in the election process to choose their government. This is done by Universal Adult Franchise, that is, all citizens who are adults, irrespective of their caste, religion or sex, have the right to vote and elect their representatives. In India, this age is 18 years. The candidates who receive the maximum number of votes become the people's representatives and form the government.

A government is elected for a fixed period of time called a term. In this way, the power of the government gets limited by regular elections. 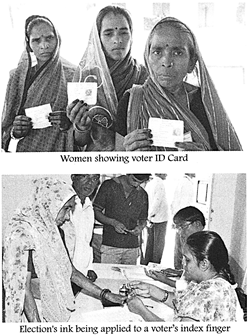 During its term, if the government behaves irresponsibly, the citizens can express their opinions and criticisms on its policies. And this is done by taking part in protest marches, signature campaigns, rallies and strikes. Freedom of expression gives people this right. Social activist Anna Hazare was on a five-day hunger strike to fight and end \[corruptio{{n}^{2}}\]in the country in April 2011.

When a government does not perform well, its tenure comes to end even before its term of five years is over and re-elections are held. These elections are called mid-term election.

What happens if there are low turnouts at the polling booths? What can be its impact?

Popular public opinions cannot be ignored by the government as they are widely publicized by the media in newspapers, on television and on radio. In a democracy, the media is not under the control of the government. Distinguished persons express their opinions on a variety of matters through the media and seek public opinion. The opinions thus expressed often force the government to change its decisions. For instance, the government postponed signing a nuclear deal with the USA after there were protests from several quarters. Dissatisfaction of people over \[{{\operatorname{inflation}}^{3}}\]has also time and again forced the government to curb price rise and give rebates and subsidies.

Today, we live in a 'cyber savvy' world and blogs and tweets on the Internet are the latest means for people to form social networks to share news and information with ease. Through these social networks they can form pressure groups to sway public opinion regarding the government.

The Court gave a ruling on the Ayodhya land dispute. What was the dispute all about and how did the verdict resolve the conflict peacefully?

There can be many reasons for conflicts. When natural resources like land, water and petrol are scarce, and demand for them is big, it can give rise to conflicts. At times, religious celebrations

and processions also lead to conflicts. For instance, if any procession is carried out by any particular religious community, there can be situations of conflict and violence.

The government upholds the constitutional law and protects citizens' rights at the time of conflict. Our constitution has given its people the right to peacefully demonstrate their displeasure with the government's policies.

However, at times conflicts may involve violence and destruction, and it affects the peace and security of the people. Then, the police is brought into action to handle conflicts. At times, when the matters take a turn for the worse, the

army is brought in. The police and the army do not allow groups to form mobs and indulge in riotous activities like brick-batting and burning vehicles. Curfew is imposed for the safety of the people. Government can also impose a state of emergency during times of natural or manmade calamity, periods of civil unrest, and situations of international or internal armed conflicts. A state of emergency is a declaration by the government that may suspend the normal functions of the executive, legislative and judicial organs.

Tribunals and courts are set up by government to resolve conflict as is clear the case study given below.

In India, rivers are a bone of contention4 between the states that share their waters. For instance, the states of Kamataka, Tamil Nadu, Kerala and the union territory of Puducherry are in constant dispute over the sharing of the water of Cauvery River. The water stored in Krishnasagar Dam in Kamataka is used for irrigation and for meeting the needs of the residents of Kamataka. The water stored in Metur Dam in Tamil Nadu is used for crops grown in the delta region of that state. The conflict arises because both the dams are on the same river. The downstream dam in Tamil Nadu can only be filled if water is released from upper stream dam located in Kamataka. Despite negotiations, the conflict was not resolved till the Government of India set up a tribunal to look into the matter. It gave its verdict in 2007 dividing the share among the states.

On 5th September 2016, in the latest development in Cauvery River water controversy. Supreme Court directed the Kamataka government to release 15,000 cusecs of water per day to Tamil Nadu for ten days. On 12th September, the Supreme Court modified its order, and instead asked the state administration of Kamataka to release 12,000 cusecs of water on a daily basis till September 20th. Widespread protests started in Kamataka. Road, rail, and air travel were impacted, and buses burnt. All this resulting in curfew being imposed in parts of Bengaluru and the conflict still continues.

Another key element of democracy is to provide equality and justice to all its citizens. In democracy all are treated equally, irrespective of their sex, religion, caste, race, language or social status.

India's earlier society treated a section of people who worked in unclean occupations as polluting people and considered them 'untouchables', i.e., forbidden to be touched. The untouchables had almost no rights in the society. They were not allowed to enter the temples, take water from the same wells used by others and were compelled to sit at a distance from the rest in public occasions. Untouchability was declared illegal in 1949. The constitution has made special provisions for the welfare of the downtrodden. Seats are reserved for them in Parliament, educational institutions and government undertakings in the form of\[S{{C}^{5}}\],\[S{{T}^{6}}\]and\[OB{{C}^{7}}\]quota.

There is discrimination in our society on the basis of gender, as well. For some reason or the other, the practice of killing the girl child after her birth still prevails. The traditional system of female infanticide has now given way to the more modem techniques of sex selection and female foeticide, i.e., killing of the girl child inside the\[wom{{b}^{8}}\]. The Prenatal Diagnostic Techniques (PNDT) Prohibition of Sex Selection Act, 1994, prevents sex determination before birth. The government has recently announced the Palna?project which is a cradle scheme for the girl child. Under the proposed scheme, the government plans to open a centre in each district. The parent can leave their girl child here if they do not want to raise her. The state will take the responsibility to bring up the child. This has reduced female infanticide. The state also gives free schooling to the girls till a certain standard. In some states, parents are paid money by the government for sending their girls to school. Further, dowry and child marriage has been made illegal in India.

Q. In 2005, Dugi and Susheela, two 14-year- old girls from Odisha received the National Bravery Award for revolting against child marriage. Try and imagine what kind of hurdles these girls must have faced.

Providing equal rights to minorities is the hallmark of a democracy. The Constitution of India has given five religious groups, namely, Muslims, Christians, Sikhs, Buddhists and Parsees, the official status of National Minorities. The Constitution recognises the rights of the minority groups and gives them certain privileges too. This way, people that belong to the minority groups have reserved seats in schools, colleges, and even in the parliament.

The National Commission for Minorities celebrates the Minority Rights Day every year on December 18.