3.            A farmer grows crops in the fields, manages orchards or vineyards, and is of four types: large farmers, medium farmers, marginal farmers and landless farmers.

Some people work in offices, some in hospitals or courts, and yet others run businesses of their own. Your parents go to work every day They do this to earn money so that they can feed you well, educate you, and give you all the necessities of life. Means of livelihood are different in rural areas. People do different kinds of jobs to earn money and lead their life.

Q. What is the occupation of your parent(s)?

The various occupations may be classified into three sectors. These are?Primary Sector, Secondary Sector and Tertiary Sector.

The primary sector consists of those activities concerned with the direct extraction of materials from nature. In this sector, people are engaged in agriculture, fishing, dairy farming and poultry farming, mining, forestry, etc. All these occupations are related to obtaining raw materials from the earth directly and hence are primary occupations.

The secondary sector includes industries that process, transform and assemble raw materials into products. For example, the cotton textile industry makes cloth from the cotton plant; a bakery makes bread, cakes, pizzas and biscuits from wheat; the steel industry converts iron ore into steel. All manufacturing industries also come in this sector. The secondary sector is dependent on the primary sector for raw material.

Q. Make a list of ten major manufacturing companies in India. Also mention what they manufacture and the raw materials they use.

This sector provides goods and services to people in exchange of payment. Once the product is ready, it needs to be made available to the people. Thus the secondary and tertiary sectors are also linked. This sector covers activities like trading, banking, healthcare, transportation, communication,   insurance,   entertainment, security, management and consultancy, among several others. We need the services of doctors, bankers, policemen, etc., at every point, hence they are very important for us.

Q. Can you think of an example showing how the three sectors are interdependent?

Climate and location of a place influence the occupations of people living in villages of India. In villages of hilly areas like   Himachal Pradesh, Meghalaya and Assam, the farmers do terrace farming1, plantation farming2 and sheep rearing. In coastal villages of the states of West Bengal, Tripura, Kerala, Andhra Pradesh, Tamil Nadu and Karnataka, fishing is the main source of livelihood. Today, the government is encouraging floriculture (growing flowers as crop) and aquaculture (rearing aquatic animals like fish for food) in rural areas. In forested areas, forestry is the main occupation. Villagers living near forest areas of Sunderbans in West Bengal often collect and sell forest products like lac and honey to earn a livelihood. In Madhya Pradesh and Maharashtra, many people collect and sell leaves of the tendu tree which are used for making bidis. Similarly, the edible flowers of the mahua tree are collected and sold in Bihar and Odisha. Collecting honey is an important source of livelihood for the people living near the Sunderbans in West Bengal. Timber and saw mills are also found in the forest areas. Some villages are engaged in handicrafts like?basket making, pot making, carpet making and weaving.

The village is surrounded by crop fields. People of villages are mostly farmers?very few are rich, and most of them are poor. Raghav Chowdhary is a large farmer. He owns around thirty-five acres of land. He grows crops like-wheat, rice, maize, sugar cane, pulses and vegetables in the fields. He has employed labourers to till the land, plant saplings, remove weeds, spray pesticides and harvest the crops. He uses expensive machinery like tractors and threshers, and buys good quality seeds and fertilizers for better farming. Such farmers are called malik by the villagers.

Ravi, his neighbour, owns a few acres of land. What he gets from his land is just enough for himself. At times, if there is a little excess, he sells in the market. Ravi's wife Sita, works hard too. Along with all the household chores she can

Sankrapur is a remote village in Maharashtra. There are no proper roads to reach Sankrapur. You will find mostly mud-and-straw dwellings and cattle scattered around.

The village has no electricity. At night, kerosene lenterns are used for light. People sit and sleep on \[charpoy{{s}^{3}}\], which are dragged outside on warm days. A local well provides water for the village. You can find women fetching water in earthen pots from the well. There are tube wells as well. The womenfolk cook food on a\[chula{{h}^{4}}\], using wood or cowdung cakes for fuel. Cowdung cakes are made from cawdung by drying them in the sun. 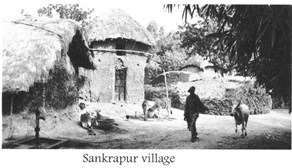 Q. Read "Life in Sankrapur" and write down the occupations of the people, categorising them into Primary, secondary and tertiary occupations.

be found working in the crop fields. The income in the house is not stable as the crops sometimes fail due to erratic rains. Ravi has a cow and two goats. He sells their milk to get some extra earning. Only 20 per cent of the families living in this village are farmers (kisaans) that own land big enough to produce food to sustain themselves. Same is the story in other   villages in India. These farmers are called middle farmers. Some farmers in this village have no land of their own, and work on other people's land as labourers or mazdoors. Ramji Ram is one such landless farmer. Ramji and his wife Saroj work the whole day in Raghav Chowdhary's field and at the end of the day Ramji Ram is paid ?50 while Saroj gets ?35 as daily wages. Often, they are given a share of the grain instead of money. These landless labourers do not work in the field throughout the year. Ramji's family migrates to the nearby town in search of work at construction sites when there is no work in the field. Ramji was not always a landless labourer. Earlier, Ramji was a marginal farmer. He owned a small land. Once, the crops failed due to erratic monsoons. He did not have a tube well to irrigate his farm. He had to sell his land to pay off the debts. Today even though he has paid back the mool (capital sum he had borrowed) the sood (interest) is still unpaid. This is the plight of a landless farmer in our villages. About 40 per cent of the families living in this 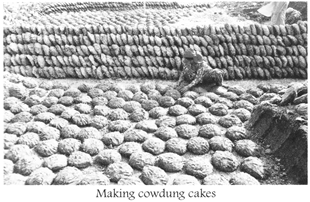 village belong to this category. Same is the story in other villages in India.

A few families in the village are engaged in dairy farming, poultry farming and cattle earing. Gopal is a dairy farmer. He keeps cows and goats. Copal's wife Shanti, takes care of the cattle, she feeds them, bathes them, and milks them. Gopal carries cans of milk from door to door, to sell the milk. He is known as the doodhwala or milkman in the village. Halwai Shiv is his biggest customer. He makes different sweets from the milk. He supplies these sweets to Natthu's shop in the market.

Rajani Alma owns a poultry farm. She has hen and ducks. She breeds and raises them for eggs and meat. She is a poultry farmer. Animal husbandry is the agricultural practice of breeding and raising livestock and poultry.

Q. Who works at the primary sector?Gopal or Shiv? Who is in the tertiary sector? Do you see interdependence here? 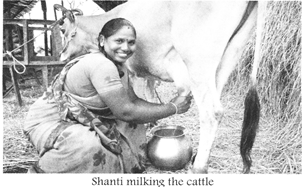 A small river flows on the outskirts of the village. On the banks of the river is the fishermen's dwelling. Fishermen catch fish and sell them in the fish market. Some fish are also taken to the nearby town and sold at a good price. The small fishermen have to depend solely on the catch to meet their daily needs. These people use small boats, usually without engines. Monsoon is a lean period for fishing.

We have talked about farming, animal husbandry and fishing occupations in this village. These are some of the primary occupations in rural areas. Mining is also done here.

Finished goods providers in a village

The village market or mandi is nearby. In the mandi you will find shopkeepers selling food, utensils, sweets, grocery, cloth, dresses, clay pots?these are all made in the village itself.

Shekhar is a grocer. His wife grinds grain in the mortar's wheel, and turns wheat and graminto flour. Shekhar sells this flour in his grocery shop. Sudesh's paan shop and Janak's chai stall are strategically placed at the comer and have regular customers. Children can be seen flocking around the chaatwala in the evening enjoying chaat. The halwai makes delicious sweets. The kunihaar makes pots of different shapes and sizes on the potter's wheel all day long, and displays them in the mandi in the evening.

Abdul is a weaver. He and his wife weave sarees and shawls on a foot-powered loom at home. This is known as a cottage industry. A cottage 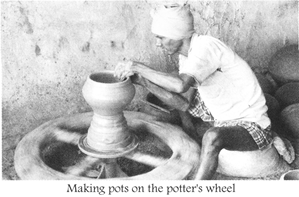 industry is the household manufacturing of goods on small scale where machines are run by hand. Workers of cottage industries are engaged in tasks such as sewing, lace-making, weaving, carpet making and basket making. Abdul takes months to make one shawl and sells them for good money in Mumbai.

Jivan is a toddy maker. Early in the morning he climbs up palm trees and hangs pots with a twine on them. He collects the sap of the trees in his pots. He returns home with pots of sap.

The Government of India launched a new crop insurance scheme called" The Pradhan Mantri Fasal Bima Yojna" on 18th February, 2016. It replaced the existing "National Agricultural Insurance scheme. This scheme aims to protect and ensure the crops of farmers against any natural calamities.

Kabarapalli (Odisha): Gangadhar Mirdha, a 50-year-old farmer who owned three acres of irrigated land, committed suicide on December 31, 2009 as he suffered crop less due to lack of water and pest attack. His naïve and shocked son kshamanidh Mirdha made it clear that his father was under stress for quite some time a s he saw no return of his investment on the paddy crop this year.

He and his wife, then brew the sap to make toddy, a sweet sticky beverage. Recently, a chuski maker has come into the village. Jivan is losing business! 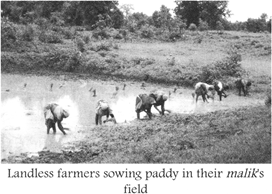 Service providers in a village

Sheila runs a school in Sankrapur under the tree. She is called masterniji by all. Everyone respects her. The children can be heard repeating multiplication tables after her in the afternoon. Sheila spends time with the local folks of Sankrapur. She tries to enlighten them about the evils of marrying off their daughters early. It is a difficult task but things are changing with her efforts.

The madari visits the village at times and entertains the villagers. The children flock around him and love to see the monkeys perform tricks. The village temple has a pujari named Manohar Pandit. He lives in the temple premises and conducts the morning and evening puja in the temple. The bhiksha?alms, he receives?is not enough to sustain the needs of his family. He also assists masterniji in the school. The local hospital has a vyadh, the doctor. He gives medicines to the villagers for various ailments. However, if a patient is serious, he sends him to the hospital in the town. Hari Das is the moneylender of this village. He gives loans to the villagers at a high yearly interest of 20 per cent. Now, a Cooperative bank has opened in the village and offers loans at a yearly interest of 10 per cent. More and more villagers have started going to the bank for loans. Hari Das is thinking of taking up a new business. There are also barbers, cobblers, bicycle mechanics, blacksmiths, carpenters and tonga pullers in the village who render their services and get paid in return. 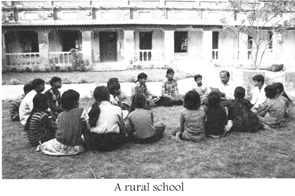