3.            A dictatorship is a government that is ruled by a person without the collective approval of the people.

4.            Democracy is the most popular form of government today. In a democracy, people choose their representatives through elections.

8.            The government builds the infrastructure of the country, looks after the welfare of the people, protects the state, upholds law and order, and maintains good relations with other countries.

What happens when a teacher is not present in the classroom? Students tend to get indisciplined. Right? One student may get up from the seat and start playing with paper planes; another may pull out the lunch box and start eating from it; a student sitting behind may demand for a bite and a fight may ensue. There is total confusion and chaos in the classroom. Then, the teacher arrives and there is pin-drop silence. You must have experienced this. So the teacher appoints a monitor to maintain order in class in her absence. The monitor is one amongst you. The other students need to obey the monitor, or else get punished.

What is one thing that is common in everyday newspaper headlines? It is the term 'government', written as Govt in short form. You have heard this word many times from the mouth of elders, over the radio and on television. You have also read it in the newspapers and magazines. What is a government? What does it do? Why do we need a government? Why does our country have a government? Who makes up the government? We will read about all this in this chapter.

At home when you and your sister fight over a dress or a toy, who resolves the conflict and brings peace? It may be either of your parents or grandparents. So you see, we need a person who commands and the other needs to obey.

Only then there is peace and things work well.

Similarly, to live peacefully and work successfully in a community, we need a person or a group of persons who can govern and protect us. We need to follow the rules and regulations set by these persons. This body of persons which governs is called government. The word 'government' comes from the Latin word gubernare, which means to steer a ship or to rule.

Q. Why is it important to have government? What will happen if there will be no government?

One of the earliest forms of government was monarchy, where the kings looked after the needs of the people and maintained law and order in the kingdom. The modem-day governments are mostly democratic in form. They comprise leaders who run the affairs of the country according to set principles and codes called laws. These persons have a duty towards the citizens of the country. They carry out their duty by performing certain functions. Let us study the levels, organs and functions of the modem day governments taking India as an example. We shall read about democracy later in the chapter.

India has a democratic form of government. But not all nations of the world have democracy though it is the most preferred one. Here are a few types of government that exist in the world.

Features of democracy ? freedom of the citizens is a fundamental right ? equality of men and women, rich and poor; citizens are treated equally ? right to vote through secret ballot?all citizens above 18 years enjoy Universal Adult Franchise. 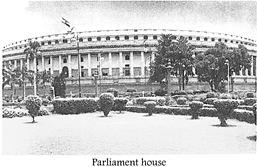 In India, the Prime Minister enjoys the real power while the President enjoys only nominal powers and act as a ceremonial head.

A monarchy is a form of government with a monarch, i.e., a king or queen, at the head. In the past, monarchy was the most common form of government. The monarch along with a group of ministers and advisers had all the powers to make and change laws. People had no say in it. The welfare of the people depended on the nature of the ruler and his capability. If the king was good, the people led a happy life, or else they suffered. The system was hereditary, i.e. the monarch inherited the throne from his father and passed it to his ward.

Q. As a child you must have read stories of kings and queens. What kind of lifestyle did they lead and how did they rule their kingdoms?

Monarchy exists even today, but only for name's sake. The United Kingdom has a Queen, but it is actually a republic, as the people elect their representatives to make and enforce laws. The queen has virtually no political power. This is called Constitutional Monarchy. Thailand and 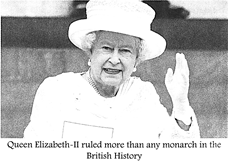 Bhutan are constitutional monarchies ruled by a king. Saudi Arabia and parts of the United Arab Emirates, such as Dubai, are still ruled by monarchs. The Kingdom of Jordan is one of Middle East's modem monarchies. Nepal had monarchy till the recent past. Now it has democracy like India.

There is another form of government called dictatorship. Here a person or a small group of people rule without the collective approval of the people. Absolute power lies with the dictator and the common people have no say in such a government. People have no freedom of expression under this system of governance. Castro in Cuba and Hitler in Germany have been dictators in the past. People's revolts over- turned the military dictatorship in Tunisia, Egypt, and Libya in early 2011. 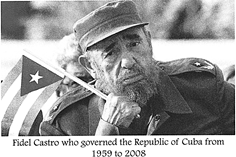 Q. Find out the countries which still have military dictatorship? 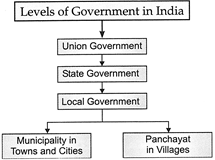 The responsibilities of the government are many and in a vast country like India it is multi-faceted. How do you think the government manages to perform all its functions? The government does this by working at different levels. In India, there are three administrative levels: the central or union government, the state government, and the local government.

The union government is the government at the national level. It looks after national matters such as national security, foreign relations, communications, currency and essential infrastructure that include railways, national highways, electricity, main ports, etc. It is seated in New Delhi.

The lowest level forms the local government. It works at the district, block and village level in the form of municipalities and Panchayats.

The government operates through its three organs which frames laws, executes them and protects them.

Laws are made to satisfy the needs of the people. In India, the lawmaking organ of the government is called the legislature. It is don in the parliament.

The organ of government that executes various functions is called the Executive. The Prime Minister and his ministers do so.

The organ that ensures that we obey these laws is called the judiciary. It punishes those who break the laws.

? Works for the welfare of the citizens? providing health care facilities (like Pulse Polio programmes); educational facilities (like Sarva Shiksha Abhiyan). It also gives old age pension to its people.

? Protects the state from foreign attacks? army, navy and airforce basically are involved in the process.

? Registers births, deaths and marriages and resolves civil and criminal issues through its courts.

? Defence of our territorial boundary is a very important function of the government. Defence forces like army, airforce, navy and security forces work for our nation.

The government makes laws and we as responsible citizens should follow these laws. This is our duty, for instance, to drive a car, you must be 18 years old. If you violate this law, you will be punished by the police and the court. If anybody, on the other hand, finds any discrimination in respect of religion, caste or gender, he/she might approach the court to get justice in this regard.

SIGNIFICANCE OF DEMOCRACY AND HISTORY OF UNIVERSAL ADULT FRANCHISE

Universal Adult Franchise has a long history. Many societies in the past denied their people the right to vote on the basis of race.

Anti-Apartheid Struggle: The policy of discrimination against the Blacks by the Whites in South Africa was called Apartheid. This was followed by the National Party government of South Africa between 1948 and 1994. Under this the\[majorti{{y}^{1}}\]'Black' inhabitants of South Africa were discriminated section of the society. They were denied human rights and political rights by the \[{{\operatorname{minority}}^{2}}\]white people who ruled them. Non-white people could not vote in South Africa.

In America too, the Ku Klux (the three distrinct organization) prevented the non- white people form voting during the pre-Civil Rights era.

Nelson Mendela led the Anti-Apartheid Movement in south. Africa. He spent over 27 years in prison for the cause. Finally, the Blacks were given freedom and they formed their own government in 1994. They voted for Nelson Mandela the first time the election of 1994. Nelson Mandela won the election and became the first Black President of South Africa.

Suffragette Movement: In the late 19th and early 20th century, women became educated. They wanted to be involved in the political affairs of the country and be treated as equal to men. A movement began in the United Kingdom which wanted women to be involved in the running of the country. This movement called the Suffragette Movement is derived from the word suffrage, meaning ?the right to vote?. The supporters of this movement, both men and women, came to be called suffragists. John Stuart Mill first brought the idea of women's suffrage before the British Parliament in 1865. 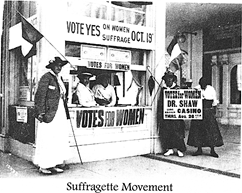 Q. Indian women were given the right to vote from the first general election in 1952. But in our parliament,