3.            The area under a Nagar Nigam which is also called Municipal Corporation and is further divided into Wards, which may be grouped together into Ward Councils.

6.            The Mayor, Deputy Mayor and Municipal Commissioner have the authority to take decisions.

8.            The municipal bodies levy different taxes such as property tax, water tax and entertainment tax to collect funds for carrying out their functions.

'Urban' means pertaining to city or town. The urban scenario is quite different from the rural one. Unlike villages, cities are large and densely populated. Cities have modern civic amenities like well-developed communication and transport system, water supply, electricity, etc. However, cities are constantly grappling with problems today. Concentration of population in urban areas has resulted in chaos like mushrooming of slums with inhuman surroundings, degradation of the environment leading to air, water and noise pollution, traffic jams, power cuts, crowded markets and spread of diseases like dengue and swine flu etc. Who takes care of such problems and ensures that the city runs smoothly? Whom do we approach when we need help to get rid of the mosquito menace or the overflowing garbage? Here, in this chapter, we will look at the working of the local government in urban areas. 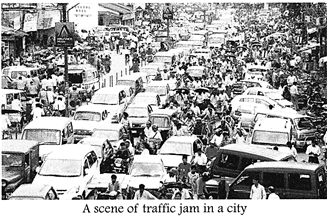 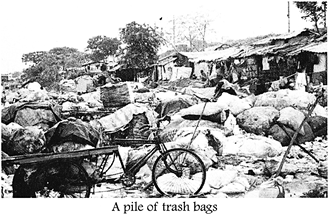 A city is divided into small units called wards. Individual wards or a collection of wards within a corporation sometimes have their own administrative bodies known as ward committees. The members of the corporation are elected by the people of each ward. The elected representatives represent their wards and are known as ward councillors. The ward councillors look after the problems related to their ward. Ward councillors are elected every five years. Seats are reserved for women, and also for the Scheduled Castes and Scheduled Tribes in the Municipal Corporation. After elections, the ward councillors elect their heads, a Mayor and a Deputy Mayor from among themselves. The Mayor is usually chosen for a term of five years. He is the Presiding Officer of the Corporation. The Municipal Corporation also has a Chief Executive Officer known as the Commissioner. The Commissioner is appointed by the State Government from the Indian Administrative Service (IAS). He or she implements the decisions made by the Corporation. Commissioner takes the help of the officers in-charge of various departments such as health, water, sanitation and housing, He or she also prepares the annual budget.

Q. Find out the name of the Mayor and Commissioner of your city.

The Municipal Council or the Municipality is the body that governs smaller cities that have a population of more than 20000 but less than 10 lakhs. Their election, appointments, terms, functions are the same as those of corporations.

The Nagar Panchayat or Town Committee governs areas or towns having less than 20,000 people living in it. Suburbs located on the outskirts of big cities are in the process of changing from agriculture as the main occupation to industry and technology-based occupations. These places face problems of both kinds?rural and urban. In such places, the Gram Panchayat has given way to the Nagar Panchayat. Nagar Panchayats look after the sanitation, water supply, electricity, primary education, housing, healthcare and the maintenance of public parks and buildings. Nagar Panchayats consists of chairman and a minimum of ten elected ward members and three nominated members. The members are elected for five years.

The Constitution provides a list of functions for the local government in cities. The Corporation has both obligatory functions and optional functions.

Compulsory functions are as follows:

? Construction and maintenance of roads.

? Maintenance of public health and sanitation through waste management and drainage.

? Maintenance of public hospitals and provision of vaccinations and taking measures to control epidemics.

? Establishment and maintenance of primary schools.

? Registration of births and deaths.

? Naming of streets and numbering of houses.

? Ensuring public safety by removing obstructions, say a manhole or a fallen tree, in public streets.

? Maintaining fire engines and ambulance services to save life and property.

Some of its optional functions are:

The Chennai Corporation, one of the oldest municipal corporations of India; was amalgamated during the rule of the East India Company.

? Safeguarding the interests of the weaker sections of the society by providing housing for low income groups, rescue homes for women and old, and orphanages for orphans.

Some of these functions are often taken over by the State Government. For example, today, provision of water supply and sewerage has been taken over by the State Government in several states, or has been transferred to state- run agencies. Delhi Development Authority (DDA) in Delhi is an example of a state level agency that takes care of urban development. DDA acquires land and conducts development works.

With changing times and a rising population, the work load of the Municipal Corporation has increased. Today, we generate more waste; we need 24-hour supply of water and electricity, we 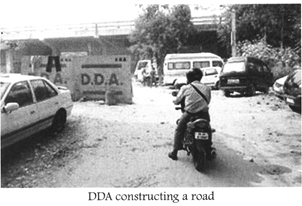 In spite of so many departments working at various levels, do you still face problems in your locality? Are there times when you are not able to finish your homework because there is a power cut or you are not able to take a bath before going to school because there is no water in the tap? Why do you think we face such problems? Who is to blame for this? Discuss in class and come out with solutions.

need a faster and more efficient public transport system and so on. To fulfil our growing needs, the Municipal Corporation is hiring private contractors. This is called sub-contracting. Private contractors undertake jobs like collecting garbage, cleaning streets, building bridges and roads. Labourers are employed on daily wages or contractual basis by private companies for such government contracts.

As you can see, the Municipal Corporation has numerous functions to perform. Providing and maintaining so many facilities and services require funds. When you need money, you simply take it from your parents. Who gives money to the Municipal Corporation? The government has the right to collect money from the people. This money is called tax. The Municipal Corporation levies different taxes such are property tax, vehicle tax, water tax, entertainment tax, octroi tax (now abolished in many cities) and service tax. Goods and service Tax Bill or GST, 2014 (or one hundred and Twenty second Amendment Bill, 2014) will be implemented in India from April 1st 2017. This is a comprehensive indirect tax on manufacture, sale and consumption of goods and services throughout India.

VAT (Value Added Tax) is the indirect tax charged by sellers of goods and service providers. You would notice a VAT percentage of 2 per cent to 10 per cent on menu cards in restaurants or on receipts of market shopping. Owners of homes, shops and offices have to pay property tax. Water and electricity tax is taken from residents. Theatre tax is an example of entertainment tax. You pay this tax when you go to watch a movie in a theatre or a multiplex. Entertainment tax is also levied when you visit a fair, exhibition or amusement park. Toll tax is a form of octroi tax. It is charged from vehicles coming into the city.

Goods and Service Tax Bill or GST 2014 (one hundred and twenty second amendment bill, 2014) will be implemented in India from April 1st 2017. This is a comprehensive indirect tax on manufacture, sale and consumption of goods and services throughout India.

A company located in Mumbai advertises its products in the Patna edition of a newspaper, which has its registered office in Delhi. In this case, the service is being finally consumed in Bihar. However, as the tax payer of services is in Mumbai, the tax would accumulate to Maharashtra. 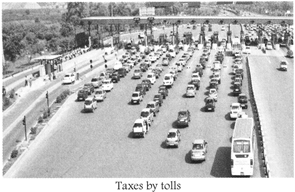 Ronit's house is located on the main road. Earlier, there was not much traffic on the road, but over the years, the Municipal Corporation has built more roads, and a traffic crossing nearby. As a result, Ronit and his neighbours are constantly disturbed by the loud honking of vehicles, traffic jams and air pollution. Ronit and his neighbours lodge a written petition to their Ward Councillor. The Ward Councillor discusses this issue in the ward members' meeting, and seeks the opinion and advice of the traffic department of that area. The Ward Councillor then decide to present the matter before the Municipal Commissioner. The Municipal Commissioner issues orders to the engineering department to construct a flyover in that area. However, the engineering department is hard pressed with work. So the Municipal Commissioner tells the department to sub- contract the work to a private contractor. The department takes out a tender and chooses the best contractor for the work. It takes six months to build the flyover.

Today, the traffic on the road is well under control, and Ronit and his neighbours live happily.

Find out if everything is working well in your locality. Some problems that may affect you could be frequent power cuts, shortage of water supply, bad roads, overflowing garbage or water logging during rainy season. Identify the problems and try to solve them. Whom will you contact and how will you go about to solve the problems?