In our day to day life, time to time we come across graphs while reading or watching news etc.

The graphs are prepared with the help of data. Data is collected through survey or other means. The data can be arranged in a specific order as per our need by using table. In this chapter we will study about some of the graphical representation of data, how to make the graphs and how to extract information’s contained by the graphs.

The information which is collected in the form of numerals is called data.

The initial data that the observer collects himself is called raw data.

To extract the information’s contained in the data easily, the data is arranged in ascending or descending order using tables.

Data can be represented graphically by using Pictographs, Bar graphs, Pie charts etc. In this chapter we will learn about Pictographs and Bar graphs.

When the data is represented on the graph with the help of pictures the graph is known as Pictograph.

Number of sixes hit by Sehwag against different team in a tournament has been shown in the following pictograph.

(a) Against which country Sehwag hit maximum number of sixes.

(b) How many sixes Sehwag hit against New Zealand.

(d) How many runs did Sehwag scored by just hitting sixes against Australia.

When the data is represented on the graph using bars the graph is known as Bar graph.

Mark obtained by Christina in different subjects has been shown in the following Bar graph: 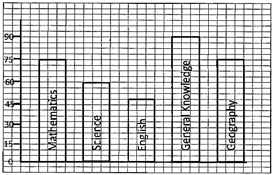 (a) In which subject Christina got least mark?

(b) Name the subjects, in which Christina got equal marks.

(c) Did Christina get maximum mark in mathematics?

(d) How much marks Christina got in science?

(b) Mathematics and geography