?              Become familiar about the different types of transportation in India

When we think about the word population in the context of human beings, the few things that immediately come to our mind are people, specific geographical area, composition of different groups, density, distribution, and so on. These words have a very important role to define the status of population of a region, country, or continent. In this section, we will discuss about Indian population.

India is the second most populous country of the world, and China being the first. However, as we are growing very fast in numbers, we will definitely snatch the crown of world's most populous country from China. At present, according to 2011 census, the total population of India is 1,210,726,932. As mentioned earlier, if we want to understand population, we have to focus on its different traits such as distribution, density, growth, and composition. Hence, first we will start with the concept of distribution in the way to understand Indian population.

India has unequal distribution of population. Some states have very high population and some have very less. Uttar Pradesh, Maharashtra, Bihar, and West Bengal are the highly populated states of India. States such as Sikkim, Jammu & Kashmir, Arunachal Pradesh, and Uttarakhand have very small share of population of the total population of India. There are various reasons behind this unequal distribution in India. 'Among the socioeconomic and historical factors of population distribution, the important ones are evolution of settled agriculture and agricultural development, pattern of human settlement, development of transport network,industrialisation, and urbanisation. It is observed that the regions falling under river plains and coastal areas of India. 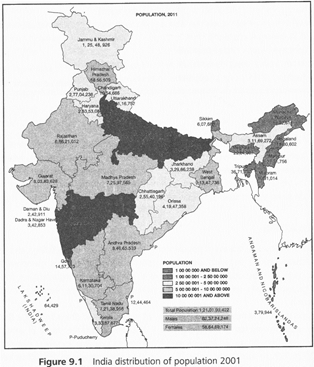 have remained the regions of high population concentration. Even though the uses of natural resources such as land and water in these regions have shown the sign of degradation, the con centration of population remains high because of an early history of human settlement and development of transport network. On the other hand, the urban regions of Delhi, Mumbai, Kolkata Bangalore, Pune.'Ahmadabad, Chennai, and Jaipur have high concentration of population due to industrial development and urbanisation drawing a large numbers of rural-urban migrants'.

Ten highly populated states of India as per 2011 census are as follows:

Ten less populated states of India as per 2011 census are as follows:

Population of union territories of India as per 2011 census are as follows: 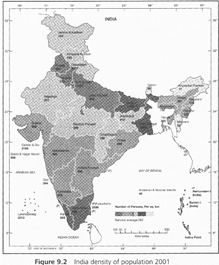 Growth in population means positive change in the number of people living in a specific area. For measuring the growth in population, we have to decide any specific time period. 'Population growth has two components, namely natural and induced. The natural growth is analysed by assessing the crude birth and death rates, whereas the induced components are explained by the volume of inward and outward movements of people in any given area'. (NCERT textbook. Class 12, Geography, Chapter 1, Population, pp. 5)

The growth rate of Indian population is very high. We can understand it by seeing the map shown in Figure 9.3. 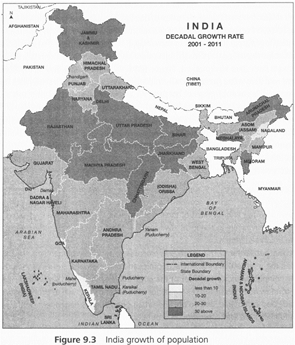 Settlement in Geography is an important sub-branch of human geography. The group of houses built by the people to live can be called a settlement. To be considered as a settlement, the places where such houses are built must have an independent name. If small places where such houses are built do not have an independent name, then it is considered as a subpart of the big settlement, and such settlements are called hamlet. Sometimes the word settlement is used for the place having a specific geographical area and people may or may not live there. The settlements where people do not live are called uninhabited settlements. The human settlements are the result of human interactions with their environment. People build home for shelter and safety from wild animals, weather, and from other people. However, these alone do not make a settlement. Actually the settlements are the result of people's cooperation and their ability to develop and use the available environmental resources. The settlements are developed with the development of human civilisation from hunting-gathering to agriculture, which demanded help of others and mutual cooperation. The area where the settlement extends is called its site. The settlements are dependent on some natural conditions such as climate, water availability, suitable land, and fertile soil.

On the basis of their location, time of staying, and building features, the settlements can be classified as follows:

3. Temporary settlement: As the name itself specify, the temporary settlement is a place where human live for a relatively short period of time. This could be a result of staying for a particular purpose that may not exist after a specific time. For example, some communities, who involve in hunting and gathering, build their homes in a jungle for a particular period of time to live safely during their stay, and this creates a temporary settlement. They can remove their shelter after the purpose is fulfilled, which could be killing and gathering of fishes, migratory birds, animals, seasonal fruits, woods, flowers, and so on. These kinds of settlements are in trend among the communities living in the jungle and practicing shifting cultivation, Glinting and gathering, and so on. The geographical distribution spread in vast area and can vary from place to place such as desert will vary from jungles and jungles will vary from the poles.

7. Segmented settlements: This kind of settlement shows the transition of the scattered and clustered settlements. This is formed by the grouping of many houses. The group of houses shares a similarity and there is a difference among them. They could be formed on the basis of same religion, language, cultural milieu, and so on.

It is the most accessible and commonly used means of transport. However, its development is not equal all over the world. Surface and distribution of population plays a very vital role in the development of road transport. Now, in the present world, road transport not only confines with the local and national boundaries but also plays an important role in international and intercontinental transportation. Northern America and Europe has developed such kind of network. These big ways have different names in many different countries, such as in India, Canada, and England, it known as highway; in Germany, it known as autobahn; in Italy, it is known as autos trod.

Train transport is a very important part of land transportation. It is very useful for long distance transportation. The development of train transportation is the gift of industrialisation. The development of train transport is based on the surface conditions and distribution of population. In planes, it is very easy to develop a railway network, but in hills and high places, it becomes very tough to establish a network of train transportation. Although train transportation is developed in every part of world, the most important train networks are those that connect a nation to another nation or very long distant areas within a nation. The railways are developed after the roadways. The first railways were developed in England in 1835 and the first train ran between the Manchester and Liverpool, and its driver and builder was George Stephens himself. Most of the railways of the world are found in the Eastern Europe and Middle East of North America. USA has the longest rail route and India has the second longest railways in the world. Indian Railways network comprises 115,000 km of track over a route of 65,808 km of route with 7112 stations. In India, the first train ran between Mumbai to Thane in 1853. It was nationalised in the year 1951. About 32.8 per cent of the route of Indian railways is electrified. It is the world's seventh largest utility employer with a population of 1.376 million employees.

Some of the world's famous train routes are as follows:

Inner water transportation includes rivers, lakes, and canals. The importance and utility of these water routes depends on the depth, width, and amount of water of these routes. Some important water routes are as follows:

The term migration basically refers to the movement of people to one place to another. The movement of people could have certain reasons related to their social life, economical condition, situation of war and conflict, and so on. We can divide migration into two different types. The first is international migration and the second is internal migration. Again, we can divide internal migration into various types such as rural area to urban area, urban area to urban area, and rural area to rural area. In the context of India, we can also add a type of migration which is called state migration. In this chapter, we will try to understand the concept and tradition of migration in India.

1. Rural to rural: When people moved from one village to another.

2. Rural to urban: When people moved to city from village.

3. Urban to rural: When people moved to village from city.

4. Urban to urban: When people moved from one city to another.

India is surrounded by almost seven countries. From some of these counties, India faces regular illegal intrusion. We can easily understand it by data given in Table 9.1.

Table 9.1 Immigrants by last residence from neighbouring countries by all duration in India, 2001\

1. Work/employment: Work or employment is one of the most important reasons of migration. We can understand it by understanding industrial and infrastructural growth of India in the past few decades. If we investigate the last few decades of development in India, we can easily find that the last few decades' development became centralised in very few regions of India. Jobs became bounded in specific cities. Hence, a person who needs an employment must come to a city such as Delhi, Mumbai, Pune, Chennai, Kolkata, and so on. Census 2001 clearly says that almost 38 per cent of total male migration in India is due to work or employment.

2. Business: Business is also an important reason of migration of people. However, this is a very limited type migration. If we talk about 2001 census, business migration only contributes 3 percent of total male migration in India.

4. Marriage: Marriage is one of the very big reasons of female migration in India. According to 2001 census, it contributes almost 65 per cent in total female migration.

6. Social exclusion: In some cases, social exclusion becomes the reason behind movement of a group of people from one place to another.

There are some consequences of migration of large number of people. Cities become over crowded. Physical and social environment become pressurised. Over-exploitation of resources starts to fulfil the needs of population. The level of ground water drops down due to over depletion. Natural ecosystem of that place becomes affected badly.