Globe is a three-dimensional, spherical, scale model of Earth. It is derived from the Latin word globus, which means mass or sphere. There are different kinds of globes like celestial globe, which represents the positions of stars in the sky.

Geography is the science of location and maps. The location is presented relatively and this process is called relative location. In geography, we use two basic methods to locate a place; they are latitudes and longitudes and these are the imaginary lines on Earth. 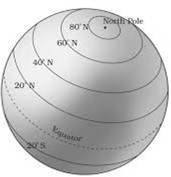 The longitudes are divided into two parts by prime meridian (denoted by 0° longitude) eastern and western. It passes through Greenwich near London. The earth is divided from 0° to 360° longitudes. All longitudes meet at the morthern and southern poles. Longitudes join at all the places of that particular longitude. The longitude 180 is international Date Line. Witch is not a straight line, and It Is deliberately drawn in a zig-zag manner to save the country form partition, which passes through pacitic ocean. The date of the western part of countries of this line is aheadof the eastern part of contries. This is the reason for a person who travels from east to west will 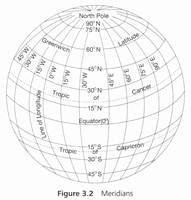 loseone day; while a person who travels from west to east will gain one day. The value of one longitude is 4 min; therefore, towards east, the time increases, and towards west, it decreases.

MOTIONS OF THE EARTH 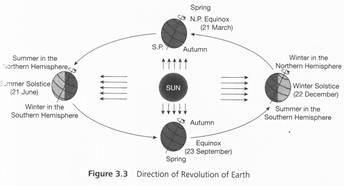 add one day extra in February, and therefore, February has 29 days in a leap year. This motion also causes change in the season. Since the axis on which Earth rotates is oval in shape, the distance of Earth from Sun is different on different times of the year.

EARTH'S INCLINATION ON ITS AXIS

Earth is inclined at 23½° on its axis, and because of this feature, the amount of sun's rays will differ on place and time. When sun's rays fall directly, we feel warm and when they fall askew, we ' feel cold. Summarily, the seasonal change is felt due to the inclination and yearly rotation of Earth.

The abovementioned motion of Earth creates the following four situations:

2.         Makar Sankranti: On 22 December, sun's rays fall directly on Tropic of Capricorn and this day is the longest day in Southern hemisphere.

3.         Equinox: On this day, the sun's rays fall directly on Mediterranean, and therefore, days and nights are equal all over the world.

When the moon comes between the Earth and the sun, it creates a situation that blocks the sun's rays and casting its shadow on Earth and this is called solar eclipse. It always happens only during new moon phase. The eclipse in which some of the part of the sun is covered by the moon is called partial solar eclipse.

When Earth comes between the moon and the sun and blocking the sun's rays from reaching the moon, it creates a situation called lunar eclipse. It always happens in full Moon; however, 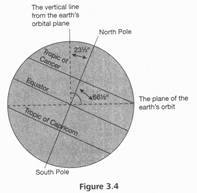 this situation does not happen regularly because there is 5° difference in orbit path of Earth and moon. In a year, a maximum of three lunar eclipses, either full or partial, can happen.

HEAT ZONES OF THE EARTH

In many parts, every sphere of the earth has been divided on the basis of temperature, which is called zone. These zones are as follows:

1.         Tropical zone: 30° North and South of equator is considered as tropical zone. The sun falls on head twice in a year. This part of the earth is always hot.

3.         Temperate zone: This zone falls at 45°-66° northern and southern latitude. The sun never falls on head in this zone, and hence, the climate is always cool. 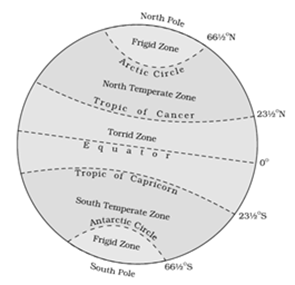 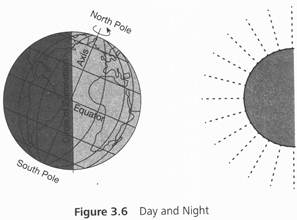 "I was in Hawaii on eight of November, when I called at my home in India my mom said it is 7th November. 1 was surprised." The abovementioned statement talks about the difference of time zones across the world. It is not very easy to understand the concept of time zone. It is very interesting to know that the very idea of standard time zone comes in existence because of the development of transportation system, which has moved from land transport to air transport. People started travelling more and world has become smaller. An international conference was held in Washington, DC, in 1884 to standardise the time around the world. Further, the standard

time zone is divided into 24 zones.

Greenwich Mean Time is the most well-known time zone. Moreover, the other time zones are all based on this mean time as it has been accepted as standard time zone. It was done because there was a need for a prime meridian location to manage navigation, international trade, and so on. Therefore, Greenwich Meridian has become a base line for the time across the world.

The world is divided into 24 time zones. Every zone has 15°. Every degree is equal to 4 min and the difference of two time zones is 1 h.

Coordinated Universal Time (UTC) is the standard time used in defining time at various zones; local time within a time zone is defined as a difference from the UTC. The difference is represented either UTC- or UTC+ along with number of hours and minutes. 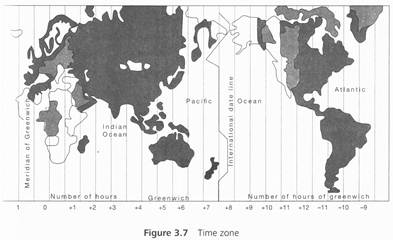