The atmosphere is made up of various layers and these layers exist because of significant changes happened in temperature. We must know that gravity plays a major role in this formation, because it pulls the air towards the earth which is known as air pressure. The layers constitute atmosphere are discussed below.

1.         Troposphere: The expansion of this layer is a little above the surface of the earth. The reason behind the life on the earth is due to the gases present in this layer. The height of troposphere is 8 km on planes and 16 km on the equator. The height of troposphere varies according to the seasons. It is high in summers and low in winters. All the climate-related process occurs in this layer, such as formation of clouds, rain, storm, and so on. As we go upwards in this layer, the temperature turns low. It has the highest temperature in equator area and lowest temperature in the Polar Regions.

2.         Stratosphere: It is the second layer of atmosphere that is situated above the troposphere. The temperature is evenly distributed in this layer. It is free from surface-related temperature effects and also from climate activities, which makes it suitable for aeroplanes. The expansion of this layer is 18 km to 32 km. Sometimes, a special type of clouds is constructed in this layer called mother-of-pearl clouds. Furthermore, this layer is very thick on Polar Regions and very thin at the equator.

4.         ionosphere: The height of ionosphere is 60 km to 640 km. We can divide this sphere into many layers. The lowest layer of this sphere is called D-layer that reflects long radio waves. Other layers such as E-1, E-2, F-1, and F-2 reflect short radio waves.

5.         Exosphere: This is the last and the highest sphere of atmosphere. It has no limited boundary. Its approxim.ate expansion is 640 km. Helium and hydrogen are dominant gases of this sphere.

Composition of gases of the Atmosphere

Important gases of the atmosphere are as follows:

Weather is the state of atmospheric conditions at a specific time and location. The temperature, humidity, and air are the basic determinants of weather. This is the reason when any one of the these determinants change, it does impact the weather.

Only 1/2000 crore portion of heat reaches the earth. The surface of earth receives heat from the rays that is left after Albedo, the loss of solar energy due to reflection, and other obstacles of solar and atmospheric structure; further, a considerable amount of energy will not even reach the surface of the earth. The atmosphere of the earth does not become warm due to the direct fall of sun's rays but by the short waves that is absorbed and reached to the earth. The surface reflects the solar heat by long waves and it is absorbed by the atmosphere. The air becomes hot due to the contact of surface; this is reason that the more we go upward, the less the temperature of air would be. The main factors that determine the temperature of any place are latitudes, height,

distribution of water and land, ocean streams, distance from sea, and nature of surface like the  snow-covered surface reflects 90% of solar heat. The water bodies absorbed a large quantity of solar heat.

The amount of energy required to heat 1 °C of 1 g of any object is called specific heat. The land has less specific heat capacity than water and this is the reason for the temperature of ocean to be relatively constant. The difference of temperature increases with the distance from oceans or seas,

Forces Affecting the Direction of Wind

We know that the atmospheric pressure influences the air motion. This motion of air is known gs wind. It is also important to know that wind flows from high pressure to low pressure. Earth also influences the motion and flow of wind. Coriolis force is exerted by the rotation of earth. Therefore, three forces namely pressure gradient force, the frictional force, and the Coriolis force collectively affect the horizontal wind near the earth.

Frictional Force affects the speed of the wind. This force is minimal at the surface of the sea. Coriolis force is the force that is created due to the earth's rotation on its axis. It also directs the wind to move towards right and left direction. At right direction, it is diverted towards north hemisphere and at the left direction, it is diverted to the south hemisphere. These diversions become high when the velocity of wind is high. It is also important to know that the Coriolis force is directly proportional to the angle of latitude.

The pattern of wind circulation is modified in different seasons due to the shifting of regions of maximum temperature, pressure, and wind belts. The most pronounced effect of such a shift is noticed in the monsoons especially over Southeast Asia {Fundamentals of Physical Geography, Class XI, NCERT, 2005, pp. 92). There are other local deviations, which are discussed further in the following sections.

Local or regional winds are created due to the differences in the heating and cooling of the earth's surface.

We know that land and sea absorb the heat in a different way. In day, land becomes warm faster than the sea. Therefore, in the case of the land, the air raises giving rise to a low pressure area. However, sea works in opposite manner as it is relatively cool, and therefore, the pressure over sea is high. The wind that moves from the sea to the land is called sea breeze and the wind that moves from the land to the sea is called land breeze. It is important to know that in night, the situation becomes completely opposite; in night, the land gets cooler faster than the sea.

In mountainous region, during the day, the slopes get heated up and air moves upslope and to fill the resulting gap, the air from the valley blows up the valley. The wind is known as the valley breeze. During the night, the slopes get cooled and the dense air descends into the valley asthp mountain wind. The cool air of the high plateaus and ice fields draining into the valley is called leeward side of the mountain ranges. The moisture in these winds while crossing the mountain ranges condense and precipitate; when it descends down the leeward side of the slope, the dry air gets warmed up by the adiabatic process. This dry air may melt the snow in short tiin((Fundamentals of Physical Geography, Class XI, NCERT, 2005, pp. 93).

When air passes through similar kinds of area or field for longer time, it takes or obtains some characteristics of the area. Air masses can be understood as a distinctive feature with humidity and temperature. Air masses can be categorized as per the source regions and there are five categories: 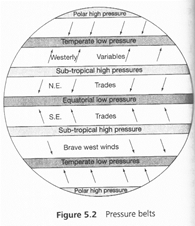 The word Monsoon originated from Arabic word 'Mousim', which means seasonal wind or weather wind. Direction of this wind changes according to the weather. Although the impact of monsoon is seen significantly in Southern Asia; however, it is also felt in Northern America and Africa. According to the ancient ideology, monsoon is the result of difference of heating of water and land. In summer, when there is low pressure in South Asian landscape, oceans have high pressure that results into flowing of air from Indian Ocean towards the land. This wind has high concentration of humidity; this causes rain in the land and are called South-Eastern Monsoon or Summer Monsoon, in winter, there is high pressure on land than the ocean and that cause the wind to blow from the land to the ocean and it's called North-Eastern or Winter Monsoon. This study of motion of monsoon is called Motion Theory.

These winds are result of permanent surface and permanent pressure proficiency. The land winds and sea winds are its example. As we have discussed, because of different temperatures of land and sea, in day time. there is high temperature and low pressure on land that cause wind to blow from sea to land. These are called sea winds. At night, the temperature of land falls and pressure increases that cause the wind to blow from land to sea. The direction of wind changes in day and night. Jet streams move in the upper atmosphere. These are also known are fast moving winds.Tropopause is the area where jet streams flow. Jet streams move from west to east. The movement of jet streams varies in various ways. They stop, split, combine, and even moves in opposite direction of another jet. Polar jets are the strongest jet streams that move 9-12 km (above the sea). The weaker jet streams are the subtropical jets that move at 10-16 km. Both the hemispheres (northern and southern) have polar jet as well as subtropical jet streams.

There are two factors that causes jet streams:

1. Heated atmosphere due to solar radiation.

rotation of earth on it axis.)