Many external and internal factors affecting the rate of respiration are as follows:

(ii) Supply of oxidisable food : Increase in soluble food content readily available for utilization as respiratory substrate, generally leads to an increase in the rate of respiration upto a certain point when some other factor becomes limiting. 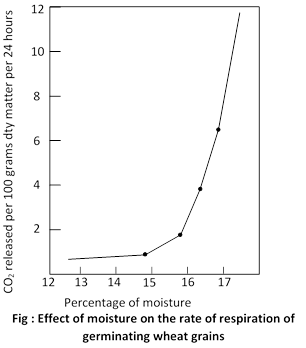 Oxygen poisoning:  The significant fall in respiration rate was observed in many tissues in pure O2, even at N.T.P. This inhibiting effect was also observed in green peas when they are exposed to pure oxygen exerting a pressure of 5 atm- the respiration rate fall rapidly. The oxygen poisoning effect was reversible, if the exposure to high oxygen pressure was not too prolonged. 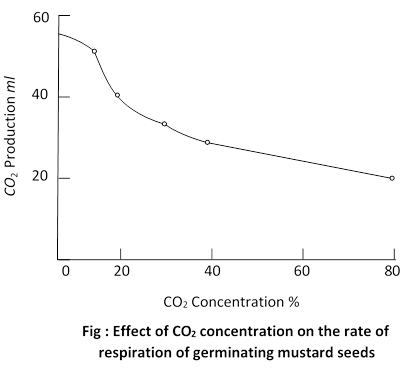 In case of blue green algae (Anabaena) respiration rate was found to depend upon light and the effect was also influenced by O2-concentration.

This fact is made use of in storage of fruits. Air containing 10% CO2 (in atmosphere it is only 0.03%) retards respiratory break down and therefore reduces sugar consumption and thus prolongs the life of the fruit.

A purely mechanical stimulation of respiration has been demonstrated in leaves of a number of species by Audus (1939,40,46). A gentle rubbing, touching, handling and bending of the leaf blade was sufficient to induce a marked rise in the respiration rate (20 to 183%) which persisted for several days. If the treatment was repeated at intervals, the stimulus gradually lost its effect in increasing the rate of respiration.

However, various chemical substances such as chloroform, ether, acetone, morphine, etc., brings about an increase in respiratory activity. Ripening fruits produce ethylene and this is accompanied by an increase in respiration rate. Other volatile products responsible for the flavour (aroma) e.g., methyl, ethyl, amyl, esters of formic, acetic, caproic and caprylic acid also associated with increased respiration rate, reach a maximum during ripening of fruits.

(i) Protoplasm :  The rate of respiration depends on quality and quantity of protoplasm. The meristematic cells (dividing cells of root and shoot apex) have more protoplasm than mature cells. Hence, the meristematic cells have higher rate of respiration than the mature cells. Respiration rate high at growing regions like floral and vegetative buds, germinating seedlings, young leaves, stem and root apices. 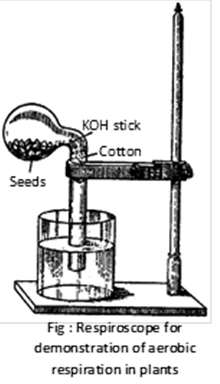 (2) Demonstration of anaerobic respiration :  In this experiment anaerobic condition created by filling the test tube with mercury. After completion of experiment the level of mercury goes down, because \[C{{O}_{2}}\] evolved by the respiration push the mercury level down. When KOH is introduced mercury level will again rise up to top. 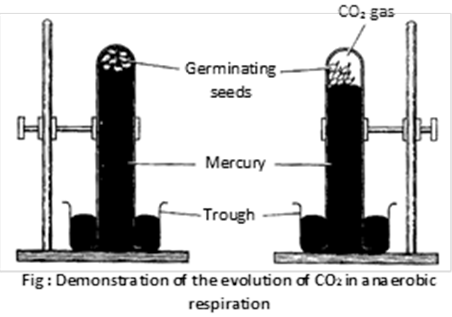 (4) Demonstration of liberation of heat energy during respiration : In this experiment bottle A filled with boiled seed and bottle B filled with germinating seed. After 24 hours temperature of both thermometer noted. Observation shows rise in temperature in bottle B because these seeds are respiring. 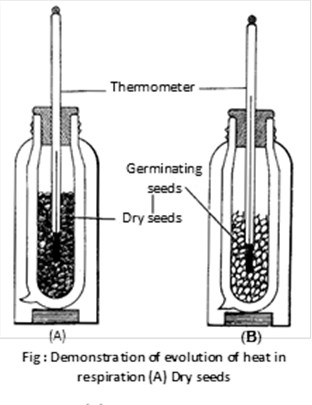 (5) Measurement of rate of respiration by Ganong's respirometer : The apparatus consists of three parts: 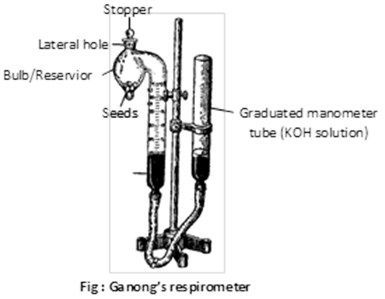 (i) A bulb for the respiring material, with stopper.

(iii) A levelling or reservoir tube connected with manometer tube by a stout rubber tubing.

2 ml of respiring material are put into the bigger bulb of the respirometer and 10% KOH in placed in the manometer tube. Experiment start with the turning the glass stopper at the top. Respiration now takes place in a closed space and the absorption of \[C{{O}_{2}}\] ­liberated shown by rise in KOH solution in the graduated tube.

[For the measurement of R.Q. saturated solution of NaCl is first place in manometer tube. (Pure water not used, as it absorbed \[C{{O}_{2}}\])].

Different respiratory substrates (carbohydrate, fat seed) are taken. In the graduated tube will remain more or less and unaltered showing that the volumes of \[C{{O}_{2}}\] evolved and oxygen absorbed are the same and R.Q. =1. If solid KOH pellets than added to salt solution in the tube, the accumulated \[C{{O}_{2}}\] is absorbed and can be measured from the reading in the tube.

(6) Demonstration of fermentation : For this experiment glucose, baker's yeast and water are taken in Kuhne's tube. As a result the level of solution falls in the upright arm and the solution gives alcoholic smell, proves that alcoholic fermentation of glucose takes place. 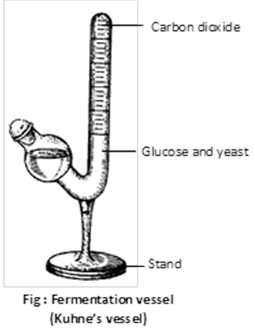