NEET Biology Respiration In Plants Introduction and Types of Respiration

Introduction and Types of Respiration

Respiration is a vital process, includes the intake of oxygen. Chemically it is catabolic and brings about the oxidation and decomposition of organic compounds like carbohydrate, fat, protein in the cells of plants and animals with the release of energy. Oxidation of organic compounds by respiration, resulting in the release of chemical energies water and carbon dioxide. The overall process may be states according to the following general equation:

In this reaction, six molecules of oxygen taken up and six molecules each of \[C{{O}_{2}}and\text{ }{{H}_{2}}O\]are formed with energy derived from respiration of each molecule of sugar oxidation. The plant cell is able to do chemical work in synthesizing energy- rich materials such as fat and hydrocarbon, osmotic work such as uptake and accumulation of salt and mechanical work such as involved in growth.

Definition of respiration : Cellular respiration is an enzyme controlled process of biological oxidation of food materials in a living cell, using molecular\[{{O}_{2}}\], producing\[C{{O}_{2}}and\text{ }{{H}_{2}}O\], and releasing energy in small steps and storing it in biologically useful forms, generally  ATP.

The energy released by oxidation of organic molecules is actually transferred to the high energy terminal bonds of ATP, a form that can be readily utilized by the cell to do work. Once ATP is formed, its energy may be utilized at various places in the cell to drive energy- requiring reactions. In these processes, one of the three phosphate groups is removed from the ATP molecule. Thus the role of ATP as an intermediate energy transforming compound between energy releasing and energy consuming reactions.

(2) Significance of respiration: Respiration plays a significant role in the life of plants. The important ones are given below:

(i) It releases energy, which is consumed in various metabolic process necessary for life of plant.

(ii) Energy produced can be regulated according to requirement of all activities.

(iii) It convert in soluble foods into soluble form.

(v) It liberates carbon dioxide, which is used in photosynthesis.

(vii) It activates the different meristematic tissue of the plant.

(4) Exchange of gases in photosynthesis and respiration: Respiration is continually going on in all living cells and oxygen is being continually absorbed and carbon dioxide liberate. The intake of oxygen (Liberated by photosynthesis) and liberation of carbon dioxide (evolved in respiration) takes place through the stomata and lenticels. The real process of respiration consists in the oxidation of organic substances which takes place in the protoplasm of the living cells and the gaseous exchange is an outward manifestation and an accompaniment of respiration. The intensity of gaseous exchange depends upon the intensity of respiration. It is comparatively rapid in meristematic and growing tissues where the formation of new cells and cell wall material requires a large supply of energy and is comparatively slow in mature cells due to the slowness of metabolic activities. 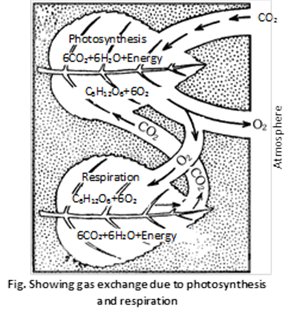 (5) Comparison between respiration and combustion : According Lavosier cell respiration resembles the combustion (e.g., burning of coal, wood, oil etc.) in the breakdown of complex organic compounds in the presence of oxygen and production of carbon dioxide and energy, but there are certain fundamental differences between the two processes:

Differences between cell respiration and combustion

There are three phases of respiration:

Both the exchange of gases occur on the principle of diffusion.

(3) Cellular respiration: It is an enzymatically-controlled stepped chemical process in which glucose is  oxidised inside the mitochondria to produce energy-rich ATP  molecules with high-energy bonds.

So, respiration is a biochemical process.

In respiration many types of high energy compounds are oxidised. These are called respiratory substrate or respiratory fuel and may include carbohydrates, fats and protein.

(1) Carbohydrate: Carbohydrates such as glucose, fructose (hexoses), sucrose (disaccharide) or starch, insulin, hemicellulose (polysaccharide) etc; are the main substrates. Glucose are the first energy rich compounds to be oxidised during respiration. Brain cells of mammals utilized only glucose  as respiratory substrate. Complex carbohydrates are hydrolysed into hexose sugars before being utilized as respiratory substrates. The energy present in one gram carbohydrate is - 4.4 Kcal or 18.4 kJ.

(2) Fats: Under certain conditions (mainly when carbohydrate reserves have been exhausted) fats are also oxidised. Fat are used as respiratory substrate after their hydrolysis to fatty acids and glycerol by lipase and their subsequent conversion to hexose sugars. The energy present in one gram of fats is 9.8 Kcal or 41kJ, which is maximum as compared to another substrate.

(1) Obligate aerobes : These organisms can respire only in the presence of oxygen. Thus oxygen is essential for their survival.

(2) Facultative anaerobes : Such organisms usually respire aerobically (i.e., in the presence of oxygen) but under certain condition may also respire anaerobically (e.g., Yeast, parasites of the alimentary canal).

(3) Obligate anaerobes : These organism normally respire anaerobically which is their major ATP- yielding process. Such organisms are in fact killed in the presence of substantial amounts of oxygen (e.g., Clostridium botulinum  and C. tetani).

(4) Facultative aerobes : These are primarily anaerobic organisms but under certain condition may also respire aerobically.

It uses oxygen and completely oxidises the organic food mainly carbohydrate (Sugars) to carbon dioxide and water. It therefore, releases the entire energy available in glucose.

It is divided into two phases: Glycolysis, Aerobic oxidation of pyruvic acid.

Notes - Introduction and Types of Respiration