(1) Discovery:  It is given by Embden, Meyerhoff and Parnas in 1930. It is the first stage of breakdown of glucose in the cell.

(3) Site of occurrence : Glycolysis takes place in the cytoplasm and does not use oxygen. Thus, it is an anaerobic pathway. In fact, it occurs in both aerobic and anaerobic respiration.

(4) Inter conversions of sugars : Different forms of carbohydrate before entering in glycolysis converted into simplest form like glucose, glucose 6-phosphate or fructose 6-phosphate. Then these sugars are metabolized into the glycolysis. The flow chart that showing inter conversion of sugar are given below: 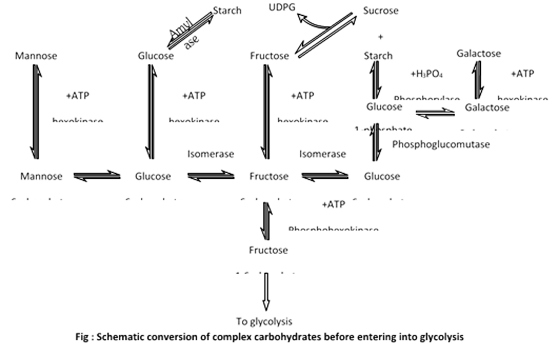 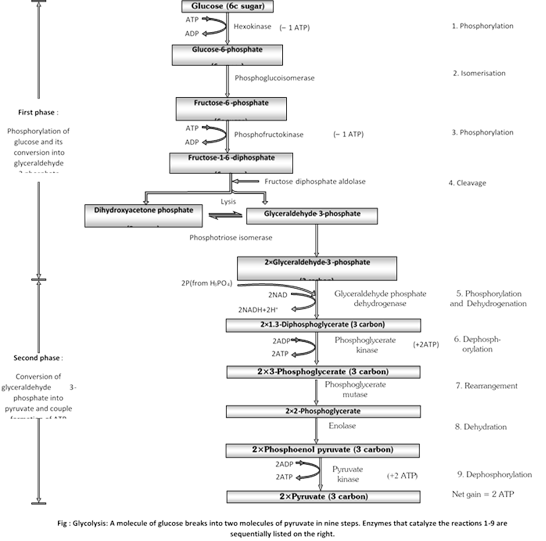 (6) Enzymes of glycolysis and their co-factors

(7) Steps of glycolysis :  Glycolysis consists of 9 steps. Each step is catalysed by a specific enzyme. Most of the reaction are reversible.

(i) First phosphorylation : The third phosphate group separates from adenosine triphospate (ATP) molecule, converting the latter into adenosine diphophate (ADP) and releasing energy. With this energy, the phosphate group combines with glucose to form glucose 6-phosphate, The reaction is catalysed by the enzyme, hexokinase  or glucokinase in the presence of Mg2+. Thus, a molecule of ATP is consumed in this step. This glucose 6-phosphate (phosphoglucose) is called active glucose.

Fructose 6-phosphate may be formed directly from free fructose by its phosphorylation in the presence of an enzyme fructokinase, Mg 2+ and ATP

(iii) Second phosphorylation : Fructose 6-phosphate combines with another phosphate group from another ATP molecule, yielding fructose 1, 6-diphosphate and ADP , The combination is catalysed by an enzyme phosphofructokinase in the presence of Mg2+ and appears  to be irreversible. This phosphorylation, thus, consume another molecule of ATP. Excess of ATP inhibits phosphofructokinase.

phosphorylation reaction activate the sugar and prevent its excape from the cell. They go uphill, increasing the energy content of the products.

(iv) Cleavage : Fructose 1,6-diphosphate now splits into two 3-carbon, phosphorylated sugars :   dihydroxyacetone phosphate (DHAP) and 3-phosphoglyceraldehyde (3-PGAL), or glyceraldehyde 3-phosphate (GAP). The reaction is catalyzed by an enzyme aldolase. DHAP is converted into PGAL with the aid of an enzyme phosphotriose isomerase.

(v) Phosphorylation and Oxidative dehydrogenation: In phosphorylation, 3-phosphoglyceraldehyde combines with a phosphate group derived from inorganic phosphoric acid (H3PO4) found in cytosol, not form ATP, forming1, 3-diposphoglycerate, or diphosphoglyceric acid. The reaction occurs with the aid of a specific enzyme.

(b) As stated above, two hydrogen (H) atoms (2 proton and 2 electrons) separate from 3-phosphoglyceraldehyde. Of these, one complete hydrogen atom (proton and electron) and one additional electron are picked up by NAD+ which gets reduced to NADH. The remaining one hydrogen proton  or ion (H+) remains free in the cytosol.

NADH is a high-energy substance, carrying the rest of the energy released by separation of hydrogen atoms from 3- PGAL. Energy is actually released by transfer of electrons from 3-PGAL to NAD.  The NADH provides energy to convert ADP to ATP by passing its electrons over the electron transmitter system if oxygen is available.

The overall reaction is as under –

(vii) Isomerisation/ Rearrangement : The phosphate group on the third carbon of 3-phosphoglycerate shifts to the second carbon, producing 2-phosphoglycerate. This change is aided by the enzyme phosphoglyceromutase.

(vii) Isomerisation/ Rearrangement: The phosphate group on the third carbon of 3-phosphoglycerate shifts to the second carbon, producing 2-phosphoglycerate. This change is aided by the enzyme phosphoglyceromutase.

(viii) Dehydration : 2-phosphoglycerate loses a water molecule in the presence of an enzyme, enolase and Mg2+, and changes into phosphoenol pyruvate. The latter undergoes molecular rearrangement that transforms its phosphate group into a high-energy phosphate bond.

All enzymes, reactants, intermediates and products of glycolysis are dissolved in the cytosol. Their interaction depends on random collisions brought about by kinetic movements.

(i) Each molecule of glucose produces 2 molecules of pyruvic acid at the end of the glycolysis.

(ii) The net gain of ATP in this process is two ATP molecules (four ATPs are formed in glycolysis but two of them are used up in the reaction).

(iv) During aerobic respiration (when oxygen is available) each NADH2 forms 3 ATP and H2O through electron transport system of mitochondria. In this process  ½ O2  molecule is utilized for the synthesis of each water molecule.

(v) Reaction of  glycolysis do not require oxygen and there is no output of CO2.