Discovery : Flagellum presence was first reported by Englemann (1868). Jansen (1887) was first scientist to report the structure of sperm flagellum.

Definition : Cilia and flagella are microscopic, hair or thread-like motile structures present extra-cellularly but originate intra-cellularly from the basal body.

Occurrence : Cilia are found in all the ciliate protozoans e.g., Paramecium, Vorticella etc.

Flagella are found in all the flagellate protozoans e.g., Euglena, Trichonympha etc. 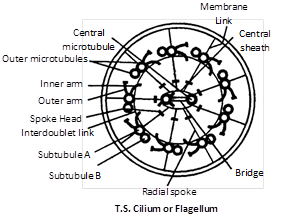 (1) Basal body : These are also termed as blepharoplast (kinetosome) or basal granule. It is present below the plasma membrane in cytoplasm. The structure is similar to centriole made of 9 triplets of microtubules.

(2) Rootlets : Made of microfilament and providing support to the basal body.

(3) Basal plate : Central fibril develop in this area. It is highly dense and lie above plasma-membrane. The basal body and the shaft at the level of plasma membrane.

(4) Shaft : It is the hair like projecting part of cilia and flagella which remains outside the cytoplasm. It has 9 doublet of microtubules in radial symmetry. These are called axonema. Each axonema has 11 fibrils, 9 in the periphery and 2 in the centre. The arrangement is called 9 + 2 pattern.

(1) Tinsel type : In this, flagellum has lateral hair-like processes, called flimmers or mastigonemes.

(2) Whiplash type : In this, flagellum has no flimmers.

(2) Being protoplasmic structure they can function as sensory organs.

(3) They show sensitivity to changes in light, temperature and contact.

Difference between cilia and flagella

In eukaryotic cell, a framework of fibrous protein elements became necessary to support the extensive system of membranes. These elements collectively form cytoskeleton of the cell. There are of three types.

(1) Microtubules : These were first discovered by De Robertis and Franchi (1953) in the axons of medullated nerve fibres and were named neurotubules.

Structure : A microtubule is a hollow cylindrical structure of about \[250{AA}\] in diameter with about \[150{AA}\] luman. Its wall is about 50Å thick. Its walls is formed of 13 parallel, proto-tubules.

(1) These form a part of cytoskeleton and help in cell-shape and mechanical support.

(2) The microtubules of cilia and flagella help in locomotion and feeding.

(3) The microtubules of asters and spindle fibres of the mitotic apparatus help in the movement of chromosomes towards the opposite poles in cell-division.

Position : These are electron-microscopic, long, narrow, cylindrical, non-contractile and proteins structures found only in the eukaryotic cytoplasm. These are present in the microvilli, muscle fibres (called myofilaments) etc. But these are absent in prokaryotes.

Structure : Each microfilament is a solid filament of 50-60 Å diameter and is formed of a helical series of globular protein molecules. These are generally grouped to form bundles.

Chemical composition : These are mainly formed of actin-protein (contractile).

(1) The microfilaments forms a part of cytoskeleton and change the cell shape during development, motility and division.

(2) The microfilaments bring about directed movements of particles and organelles along them in the cell.

(4) The microfilaments are responsible for the movement of cell membrane during endocytosis  and exocytosis.

Location : They are supportive elements in the cytoplasm of the eukaryotic cells. They are missing in mammalian RBCs.

Structure : The IFs are somewhat larger than the microfilaments and are about 10 nm thick. They are solid, unbranched and composed of nonmotile structural proteins, such as keratin, desmine, vimentin.

(1) They form a part of cytoskeleton that supports the fluid cytosol and maintains the shape of the cell.

(2) They provided strength to the axons.

(3) They keep nucleus and other organelles in place.