The ribosomes are smallest known electron microscopic without membrane, ribonucleo–protein particles attached either on RER or floating freely in the cytoplasm and are the sites of protein synthesis.

Discovery : In 1943 Claude observed some basophilic bodies and named them as microsome. Palade (1955) coined the term ribosome (form animal cell). Ribosomes in nucleoplasm were observed by Tsao and Sato (1959). First isolated by Tissieres and Watson (1958) from E. coli. Ribosomes found in groups are termed as polyribosomes or ergosomes (Rich and Warner 1963 observed first time polyribosomes).

(1) 70S ribosomes : Found in prokaryotes, mitochondria and plastid of eukaryotes.

Structure : Each ribosome is formed of two unequal subunits, which join only at the time of protein synthesis. In 70S and 80S ribosomes, 50S and 30S, 60S and 40S are larger and smaller subunits respectively. Larger subunits is dome shaped and attached to ER by glycoproteins called “ribophorins”. 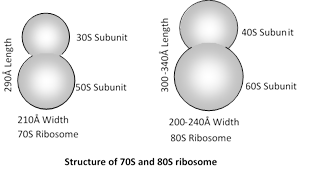 Smaller subunit is oval shaped and fits as a cap on flat side of larger subunit. Ribosomes are attached to ER through hydrophobic interactions.

(1) In eukaryotes the ribosomal RNAs like 18S, 5.8S and 28S are synthesized by nucleolus and 5S RNA out of the nucleus.

(2) In prokaryotes both rRNA and its protein are synthesized as well as assembled by cytoplasm.

Polyribosomes or Polysomes : When many ribosomes (generally \[68\]) are attached at some mRNA strand. It is called polysome. The distance between adjacent ribosomes is of 90 nucleotides. These are functional unit of protein synthesis.

(1) Ribosomes are also called protein factories of the cell or work branch of proteins.

(3) Ribosomes are essential for protein synthesis.

(4) Help in the process of photosynthesis.

(6) Newly formed polypeptide is protected from degradation by cytoplasmic enzymes in large sub-unit of ribosomes before releasing it into RER lumen.