Discovery : It was first discovered by Robert Hooke in 1665 in Cork. Cell wall is the outer most, rigid, protective, non living and supportive layer found in all the plant cells, bacteria, cyanobacteria and some protists. It is not found in animal cells.

Chemical composition : Mainly cell wall consists of two parts, matrix and cellulosic fibres (microfibrils). Matrix consists of hemicellulose, pectin, glycoproteins, lipids and water.In most of the plants cell wall is made up of cellulose

The cell wall of bacteria and the inner layer of blue green algae is made-up mucopeptide. It is a polymer of two amino sugars namely N-acetyl glucosamine (NAG) and N-acetyl muramic acid (NAM) held alternately in

linkage. In higher fungi, the cell wall is made up of chitin, polymer of glucosamine.

(1) Middle lamella : Middle lamella is the outermost region which functions as a common cementing layer between two cells. It is absent on the outer free surface. It ruptures to create intercellular spaces. Middle lamella is formed of calcium and magnecium pectate. Fruit softening is due to gelatinisation of pectic compounds of middle lamella. Pectin is used as commercial jellying agent. Which is present outside the primary wall. 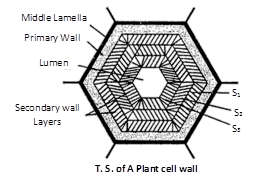 (2) Primary wall : A young plant cell forms a single layer of wall material. This layer is known as the primary cell wall. The primary wall is thin, elastic and capable of expansion in a growing cell. It grows by intussusception. Meristematic and parenchymatous cells have primary cell wall only. The cells of leaves and fruits too have only primary wall. It has more hemicellulose and less cellulose.

(3) Secondary wall : In mature cell, more layers of wall material are added internal to the primary wall. These are called the secondary cell wall. Growth by addition of new wall material on the primary wall is called accretion. It has more cellulose and less hemicellulose. The secondary wall is thick and rigid. It usually consists of three layers, which are often named

It is found in collenchyma and sclerenchyma cells, xylem vesseles.

(4) Tertiary wall : Sometimes tertiary wall is laid down on secondary wall, e.g., tracheids of gymnosperms. It is composed of cellulose and xylan.

Origin :  A cell wall is originate at telophase stage of cell division. The plane and place of cell wall is determined by the microtubules. Fragments of ER and vesicles of golgi body alligned at the equator, called as phragmoplast, later which forms the cell plate. The synthesis of cellulose takes place by the help of enzyme cellulose synthase present in the plasma membrane. The cell plate forms the cell wall.

(1) By intussuception : As the cell wall stretches in one or more directions, new cell wall material secreted by protoplasm gets embedded within the original wall.

(2) By apposition : In this method new cell wall material secreted by protoplasm is deposited by definite thin plates one after the other.

Thickenings of cell wall : In many secondary walls specially those of xylem the cell wall becomes hard and thick due to the deposition of lignin. With the increasing amount of lignin, deposition protoplasm is lost. First the lignin is deposited in middle lamella and primary wall and later on in secondary wall.

Pits : Secondary walls may have irregular thickenings at some places and these places are called pits. Pits are of five types :

(1) Simple pit : In which pit chamber is uniform in diameter.

(2) Bordered pit : In which pit chamber is flask shaped in tracheids of gymnosperm and vessels of angiosperms.

(3) Blind pit : A pit without any corresponding pit on the adjacent wall is called blind pit.

(4) Half bordered pit : A pit with half border and the rest half with a simple pit.

(5) Aspirated pit : It is a non-functional pit in which the pit aperture is blocked permanently by torus.

Plasmodesmata : Tangle (1879) first of all discovered them and were studied elaborately by Strasburger (1901). A number of plasmodesmata or cytoplasmic strands are present in pit through which the cytoplasm of one cell is in contact with another. Endoplasmic reticulum plays a role in origin of plasmodesmata.

(1) It maintains shape of the plant cells and protect the cells from mechanical injury.

(2) It wards off the attacks of pathogens (viruses, bacteria, fungi, protozoans).

(3) It provides mechanical support against gravity. It is due to the rigid cell wall that the aerial parts of the plants are able to keep erect and expose their leaves to sunlight.

(4) The cell wall prevents undue expansion of the cell when water enters by osmosis to compensate for the lack of contractile vacuole. This prevents bursting of cells.

(5) Though permeable, the cell wall plays some regulatory role on the passage of materials into and out of the cell.

(6) Pores in the cell walls permit plasmodesmata to link up all the protoplasts into a system called symplast (symplasm).