We know that all the organisms are the results of reproduction. A recognizable feature of a human being like height, complexion, shape and size are called traits. The transmission of characters from one generation to the next is called heredity. In sexual reproduction, both male and female are involved. The new offspring evolves with similar characteristic as of their parents. These characteristic are carried with the help of gametes presents in male and female parents. Although there is similarity between parents and offspring, but the similarity is not present in all respect. The new offspring is not the true copy of the parents. No two individuals are alike in all respect in this world. This difference which arises in the off springs from one generation to the next is called variation. The variation is produced during both sexual reproduction and asexual reproduction. Though the variation in case of asexual reproduction is minimum, but still it is there. If we observe the mango plants/they all appears to be similar, but there is difference in the taste of mangoes of different plants, there is difference in their size etc. The variation is essential for organic evolution. The evolution of new species is only due to the variation in the organisms.

We know that reproduction results in variation from one generation to the next. The variation produced in the organisms during the successive generation gets accumulated over a long period of time in an organism. After several generation these variations comes up in the organisms and the organisms starts showing up different characteristics and hence leads to the appearance of new species. The main advantage of variation in a species is that it increases the chance of its survival in a changing environment. The organisms which shows positive variation, survives. Those who do not shows variations get extinct. 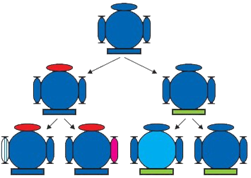