The transmission of traits from parents to their offspring is called heredity. It is the continuity of features from one generation to another generation.

Rules for the Inheritance of Traits: Menders Contribution

The transmission of genetically controlled traits from one generation to another is called inheritance. Mendelian laws of inheritance states about the way certain characteristics are transmitted from one generation to another in an organism. Mendel used pea plants for his experiments. He studied the colour of flowers, their location on the plant, the shape and colour of pea pods, the shape and colour of seeds, and the length of plant stems.

Mendel concluded that characteristics are transmitted from one generation to the next in pea plants.

Law II: Law of segregation - It states that when a pair of allele is brought together in a hybrid, the members of the allelic pair remain together without mixing and separate or segregate from each other when the hybrid forms gametes. 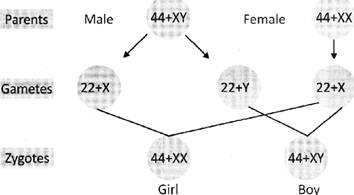 Sex determination of a child

Evolution is the series of gradual changes that take place over millions of years. It is the change in the genetic material of a population of organisms from one generation to another. Genes are the basis of evolution that passes from one generation to another and thus produces an organism's inherited traits. The inherited traits vary within organisms.

The mechanisms that determine which variant will become more common or rare in a population are natural selection and genetic drift. Natural selection is a process that causes helpful traits to become more common in a population and harmful traits to become rarer. This happens because individuals with useful traits are more likely to reproduce. This clearly indicates that more individuals in the next generation will inherit these traits. Adaptations occur through a combination of successive, small, random changes in traits over many generations and natural selection of the variants best-suited for their environment. Genetic drift is an independent process that produces random changes in the frequency of traits in a population. Genetic drift results from the disappearance of particular genes as individuals die or do not reproduce.