Water is very vital for the existence of any living being. Almost 71% of surface of the earth is covered by water.

The distribution of water bodies around the world is shown in Table 6.1.

Table 6.1 Water bodies and their distribution 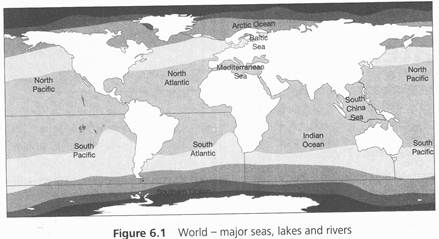 Oceans and their area are as follows:

Table 6.2 Deepest oceans in the world

Some Features of Hydrosphere

Generally, the ocean temperature remains between 5°C and 33°C. Oceans are rich sources of minerals; however, some are diluted and some are found in solid state. Some main diluted minerals are sodium chloride, magnesium chloride, sodium sulphate, and calcium. The taste of water is saline because of the composition of these minerals. Salinity differs from ocean to ocean. In one litre of water, 35% composition is salinity.

The ocean water never remains still and always in a state of motion.'It has three types of motions. The first type of motion is tide and ebb; it is systematic and continuous process of upward and downward movement of water and the basic reason of this movement is gravitational power of sun and moon. Ebb and tide do not move water per se location wise; however, it just moves it upward and downward without w changing the location. The second type of motion of water is currents. They occur due to the friction of water and air on the surface of ocean. It also does not necessarily change the location of water but it keeps the water in motion vertically. The third type of motion is ocean waves. Ocean waves are dynamic and it keeps the water in motion in one direction only. This third type of motion is important in a way that it moves the location of water. The ocean waves are the result of combination of salinity, volume, temperature, the coastal size, rotation of earth and air waves, and so on. The density of ocean water depends on the temperature and salinity of that water.

Some of the most important stream sare northern and south equatorial streams. Gulf stream, Florida

There are several types of lakes such as man-made, natural, freshwater, and saline. Freshwater lakes are formed due to the melting of ice and it is necessary that these lakes are connected with rivers. These are found on high and medium latitudes. Some examples are Baikal, Titicaca, Wular, Dal, Manasarovar, and so on.

Salty lakes are found in the areas of high evaporation and low rainfall; further, these are not connected with any river that is why they are still. These are used in the production of salt like Sambhar Lake of Rajasthan. Some of the lakes are well-connected with the sea like Chilika Late of Orissa.

Some of the famous lakes around the world are as follows:

A relatively constant way of water flowing in a direction is called river. Rivers are the biggest

source of freshwater. Some of the famous rivers around the world are as follows:

India is a developing country. It has a large population in which more than 60% of people are working under the agriculture sector. On the other hand, industries are developing very fast and becoming the backbone of India's economy. It is also a country of different climate regions. At a specific period of time, one place will be affected by flood, and the other will be suffering from drought. All these qualities of this county make it highly dependent on some natural resources and water is the most important resource among them. We use water in our agriculture and developing industries; further, we use it to fulfil the water needs of a very large population and we use it in our developing infrastructure. We are decreasing our dependency on monsoon to make sustainable development of our personal and commercial agriculture. Therefore, it is very easy to understand the importance of water resources for us. India accounts for about 2.45% of world's surface area, 4% of the world's water resources, and about 16% of world's population. The total water available from precipitation in the country in a year is about 4,000 km3. The availability from surface and replenishable groundwater is 1,869 km3. From this, only 60% can be used for beneficial purposes. Thus, the total utilisable water resources in the country are only 1,122 km3

We can divide surface water resources into four major sources: ponds, tanks, lakes, and rivers. India has gifted thousands of rivers by nature. There are almost 10,360 listed rivers. From these rivers, India gets more than 1,869 km3 of freshwater. However, due to many geographical reasons, only 32% of that water can be utilised. The amount water in river totally depends upon the size of its catchment area of river basin and the amount of rainfall occurred in the area of catchment of river. Some of the Indian Rivers has huge catchment area. The Ganga, the Brahmaputra, and the Barak rivers are leading them. These rivers are the source of 60% of surface water sources of India.

in India, we have 432 km3 freshwater resources as groundwater. However, 46% of total replenishable groundwater resources of country are shared by the Ganga and the Brahmaputra basins. As we know, we are a developing country and working hard to develop our agriculture and industries. This is the reason why utilisation of groundwater is very high in many parts of our country. The leading states where utilisation of groundwater is very high are Punjab, Haryana, Rajasthan, Tamil Nadu, Gujarat, Uttar Pradesh, Bihar, and Maharashtra. 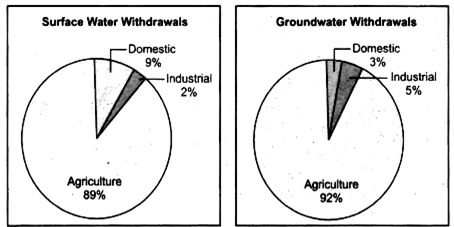 It originates in the northern Kailash range near Manasarovar Lake in Tibet. The major rivers of this system are as follows:

The famous lakes of India are as follows:

1.         Wular Lake (Jammu and Kashmir): It is the largest freshwater lake in India. The length and width of the lake are approximately 16 km and 9.6 km, respectively.

6.         Bhimtal Lake (Uttarakhand): It has a large variety of aquatic life and winter stoppage of birds from trans-Himalayan region.