Engineering Mechanics and Strength of Materials

Engineering Mechanics and Strength of Materials

It is the branch of Engineering Science which deals with the principles of mechanics along with their applications to the field problems.

Engineering Mechanics can be divided into its sub-groups as below

\[\alpha \]= Angle between resultant 'R' and one of the force

= direction of the resultant then,

According to Lam is theorem, if three forces are acting at a point and the forces are in equilibrium, then the each of the three forces is directly proportional to the sine of the angle between the other two forces.

Moment of a force: It is defined or the product of the magnitude of the force and the perpendicular distance of the point from the line of action of the force.

Couple: Two parallel forces equal in magnitude and opposite in direction and separated by a definite distance are Said to form a couple.

Action and Reaction: From Newton's third law, for every action there is a equal and opposite reaction.

Friction: Friction may be denned as the resistive force acting at the surface of contact between two bodies that resist motion of one body relative to another.

Based on the nature of two surfaces in contact, friction in categorised in the following two kinds/types.

(a) Static friction When two contact surfaces are at rest, then the force experienced by one surface is termed or static friction.

(b) Dynamic friction: When one of the two contact bodies starts moving and the other in at rest, the force experienced by the body in motion is called dynamic friction.

Co-efficient of friction\[(\mu )\]: It is defined as the ratio of limiting force of friction (F) to the normal reaction (R) between two rigid bodies.

Angle of repose\[(\alpha )\]: When a body rests on an inclined plane, the angle by which the body is at the verge (just) to start moving in terms as angle of repose.

Cone of friction: It is defined as the right circular cone with vertex at point of contact of two surfaces and axis in the direction of normal reactions.

There are many ways to reduce friction some of them are given as follows:

LAW OF CONSERVATION OF LINEAR MOMENTUM

Through experimental observations it has been found that if no external force acts on a system (called isolated) of constant mass (called closed) the total momentum of the system remains constant (with time).

A free body diagram is a diagram showing the chosen body by itself, “free” of its surroundings, with vectors drawn to show magnitude and directions of all the forces applied to the body the various other bodies that interact with it.

Acceleration of both the blocks,

\[\overrightarrow{v}\]= velocity of the body

\[\overrightarrow{F}\]= Force acting on the body

\[\overrightarrow{a}\]= acceleration produced in the body.

This attrative force is directed along the line which joins the centers of bodies.

Now, According to law,

On combining the above two expressions,

The rate of change of angular displacement of a body with respect to time is called angular velocity.

if a body is rotating at N r. p. m. then corresponding angular velocity

If the body is rotating o) rad/'s along a circular path of radius r, then its linear velocity \[(v)\]is given by

The rate of change of angular velocity is called angular acceleration. It is expressed in \[rad/{{s}^{2}}\]

where m is the mass of the body

r = radius of the circular path

As per Newton's third law of motion, the body must exert a force radially outwards of equal.

The behavior of material systems is controlled by universal physical laws. Perhaps the most ubiquitous of these are the law of mass conservation, the laws of motion invented by Newton's in 1687.

A material volume contains the same particles of matter at all times.

Fig. A material volume moves with the material particles it encloses.

The simplest forms of the four basic laws apply to an infinitesimal material particle that is so small that the velocity v, density p, thermodynamic temperature, and other intrinsic properties are essentially uniform within it. An observer moving with a particle ("sitting on it," as it was) would see its properties change with time only (Fig. below) 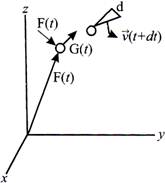 Fig. Motion of a material particle between time t and time \[t+\Delta t\]

For a material particle with infinitesimal volume\[\delta V(t)\], density\[\rho (t)\], and velocity\[\overrightarrow{v}\], the three laws have the following familiar forms:

This law asserts that the mass \[dM=\rho \delta V\]of a material particle remains invariant. (The prefix p indicates quantities that are of infinitesimal size, and the prefix d refers to changes that occur in the indicated property in time dt.)

Newton's law states that, relative to an inertial reference frame, the product of a particle's mass and acceleration is at every instant equal to the net force \[\delta \vec{F}\,\,\left( t \right)\]exerted on it by the rest of the universe, or alternatively, that the rate of change of a particle's momentum (a vector quantity) is equal at every instant to the force applied to the particle by the rest of the universe. (Actually the law states that the rate of change of momentum is proportional to the applied force, with the coefficient being universal, but in most systems of measurement the universal coefficient is set equal to unity, which determines the units of force in terms of those of acceleration and time.)

This law figures in rotary motion. The rate of change of a particle's angular momentum (the quantity in brackets on the left side of

(3), \[\overrightarrow{r}\,\,(t)\]being the particle's positon vector) is at every instant equal to the net torque exerted on the particle by the rest of the universe. This is not a new law, but one that follows from Eq. (2). Equation (3) is obtained by taking the cross product of\[\overrightarrow{r}\](t) Eq. (2), using Eq. (1), and noting that \[\overleftarrow{dr}|dt\times \overrightarrow{v}=\overrightarrow{v}\times \overrightarrow{v}=0\] Like the law is is derived from, Eq. (3) is valid only in inertical reference frames. Actually the law states that the rate of change of momentum is proportional to the applied force, with the coefficient being universal, but in most systems of measurement the universal coefficient is set equal to unity, which determines the units of force in terms of those of acceleration and time.

Load: It is defined as external force or couple to which a component is subjected during its functionality.

Stress: It is defined as the intensity of internal resisting force M developed at a point against the deformation cuased due to the load acting at the member.

Stress developed in one direction\[\to \]uniaxial state of stress 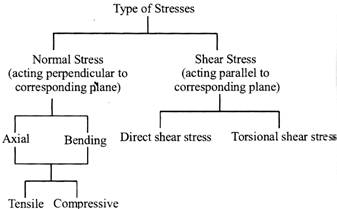 Elongation of a bar subjected to axial load P

Elongation of a tapered bar subjected to axial load P

Strain is defined as the ratio of change in dimension to original dimension. 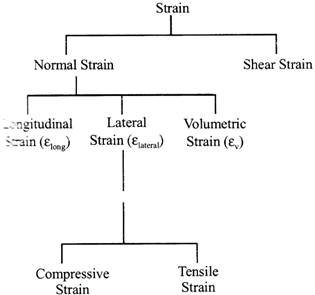 It is defined as the change in initial right angle between two line elements which are parallel to x and y axes respectively.

Young's Modulus or Modulus of Elasticity

\[\therefore \] A material having higher E value is chosen

Elastic Limit: Maximum value of stress upto which a material can be completely elastic.

(a)  Elasticity: It is the property of the material due to which it regains its original shape after the external load is removed after applied. Perfectly elastic bodies are those bodies which returns to their original shape completely.

(c)  Ductility: It is the property of the material due to which if can be drawn into thin wires. The length of deformation is very large in a ductile material.

(e) Malleability: It is the property of the material due to which it can be converted into thin sheets in compression. This property is used in forging, rolling etc.

(f) Toughness: It is the property of the material due to which a maximum amount of energy stored in a material upto fractors. This property is utilized under the action of shock or impact loading.

(g) Hardness: It is the property of the material due to which it resists cutting, scractehing, pinetration or in dilation.

Various types of beams are given as follows:

(d) Fixed beam: In fixed beam, both of its ends are rigidly fixed into the supporting walls.

\[{{I}_{NA}}\]: moment of inertia of entire cross-section about neutral axis.

Deflection of beams plays an important role in design beams for rigidity criterion.

The expressions of deflections are further used determination of natural frequencies of shaft under transverse vibrations.

For a cantilever beam under any loading condition deflection is maximum at free end.

In simply supported beam, deflection is maximum mid-span (when beam is subjected to symmetric load- only).