2.            During this period, there was a spurt in agricultural production which led to the emergence of many towns and cities.

4.            It saw the introduction of currency and witnessed the development of numerous arts and crafts including ceramics.

5.            Archaeologists have found thousands of coins made of copper or silver with the design punched on the metal. These are called punch marked coins.

6.            Pottery of a different kind has been found. This pottery is called Northern Black Polished Ware.

7.            Craftsmen and artisans formed associations called guilds or shrenis. The enormous manufacturing activity was maintained by these guilds.

From the 1st century BCE to about the 4th century CE, India underwent huge transformation. During this period, iron was widely used. This period is known as the 'second urbanisation?.

During this period, there was a spurt in agricultural production which led to the emergence of many towns and cities. This phase also opened up a network of internal and overseas trade routes. It saw the introduction of currency and witnessed the development of numerous arts and crafts including ceramics.

There were many factors which led to the increase in agricultural production. These were:

? Introduction of Iron Technology: Iron came into use in India in about 1000 BCE. It was increasingly used after 500 BCE. The use of iron was of vital importance for the expansion of agriculture. Iron axes were now used in clearing thick forests and iron-tipped ploughshares ploughed the land better.

? Better Irrigation: This was essential for better productivity. The kings funded the digging of canals, wells, tanks and artificial lakes. This was also done with the help of iron tools.

? Better Agricultural Techniques: Farmers began to use the method of transplantation in which the seeds were first sown and once the saplings started to grow, they were transplanted into the field.

PEOPLE OF THE VILLAGES

In southern India, there were three categories of people living in most of the villages. The large landowners who were called vellalar, farmers were known as uzhavar and the landless labourers and slaves called kadaisiyar and adimai.

In northern India, the village headman was the grama bhojaka. The farmers were known as grihapatis and the landless labourers were the dasa karmakara.

The grama bhojaka was the largest land owner. His position was hereditary. He collected taxes on behalf of the king. He also employed slaves and landless labourers to work on his fields. He was also the judge and settled disputes in the village.

The rulers of the southern kingdoms were patrons of literature. They organized assemblies or sangams. Three literary assemblies were held around 300 BCE. Scholars from different regions came to attend these assemblies. Poets and learned men compiled important Tamil works at these assemblies. The literature that was created is known as Sangam Literature. During this period there was a rapid development of literary works. Sangam literature describes life in these southern kingdoms. They give us immense information on the social, political, cultural and economic conditions that prevailed during the Sangam period.

Many of us must have read the Jataka Tales. These are a collection of short stories probably written by the common people. According to these texts, there was a variety of occupations, both rural and urban. Apart from farmers, cattle herders and traders, there were washermen, barbers, tailors, painters and cooks. The urban professions included scribes, physicians, accountants and money changers, entertainers and fortune tellers. The artisans included ivory workers, metal smiths, weavers, carpenters and potters.

There is archaeological evidence also. Most of the cities were fortified. Many terracotta figurines have been found at Rajagriha, the former capital of the Magadha. Monastries have been excavated at various places including Kapilavastu. Drains, wells and brick tanks found in Ujjain indicate some kind of town planning.

Archaeologists have found ring wells in many cities. These are terracotta rings arranged on top of one another. These seem to have been made for disposal of dirty water or toilets. 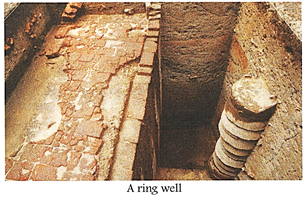 Pali texts contain the first definite references to coins. Archaeologists have found thousands of coins from many sites. They were made of copper or silver and the design was punched on the metal. These are called punch marked coins. The use of coins had important implications for trade. 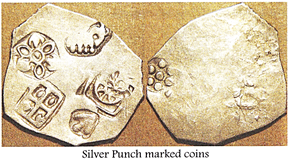 Pottery of a different kind has been found in the northern parts of the subcontinent. This pottery had a shiny, glossy surface with mirror effect. This pottery is called Northern Black Polished Ware. The discovery of some pots made by joining broken pieces indicates that the pottery was of an expensive kind. Historians have concluded that the people of the settlements were rich.

Another important craft was manufacturing of cloth. Both men and women were involved in this activity. Two important centres were Varanasi in the north and Madurai in the south.

Craftsmen and artisans formed associations called guilds or shrenis. The enormous manufacturing activity was maintained by these guilds. Some guilds organised their own distribution system. They owned a large number of boats to transport goods from various ports. Guilds had their own laws regarding organisation, production, fixation of prices of commodities etc. They settled disputes among members. They also provided training and procured raw material. They also served as banks. The rich people deposited money and earned interest. The guilds loaned money to artisans and merchants. The taxes paid by the guilds formed an important source of income to the state.

The formation and functions of guilds are discussed in Chanakya?s Arthashastra.

Mathura - A city with many functions

Mathura was an important city of ancient India. This city is situated in the fertile Gangetic plains. It was an economic hub since it was situated at the junction of important travel and trade routes. Being the birthplace of Lord Krishna, it was also a religious center. . Also, there were many Buddhist monasteries and Jain shrines.

Ancient stone inscriptions and statues have been found near Mathura which give us details of the ancient city. Many of the inscriptions are records of the gifts made to monasteries and temples. These were made by the royalty, merchants, artisans, weavers, potters, garland makers etc. Also, the Mathura Lion Capital inscription gives information that Mathura was under the rule of the Sakas. This capital is covered with Prakrit inscriptions in Khargoshti script. 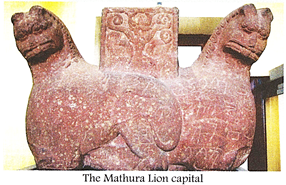 Megasthenes?s writing in the early 3rd century BCE. Have mentioned Mathura as a great city.

Arikamedu is an archaeological site near Puducherry in southern India. It was a small village, which in earlier times was a major Chola port. It was a major industrial centre and port town. Bead making was a flourishing industry. The city was also a hub of textiles like muslin and terracotta objects. Most of the industrial production was for export.

Between 100 BCE to 100 CE, this city was at its most advanced stage. The Romans came here to trade. Extensive trade was carried out with Rome. Various Roman artefacts have been found here. A large number of amphorae1 have been found with marks of Roman potter schools. A brick structure found has been identified as a warehouse. Two walled courtyards associated with tanks and trains were identified as dyeing vats where muslin cloth was dyed and prepared for export. A fragment of a Roman lamp made of fine red ware has also been found.

On the basis of these discoveries, it has been concluded that Arikamedu was a very important trading centre and port.

The Roman man excellent cities. They were brilliant engineers. They built reads, bridges, aqueducts and fine building. All Roman soldiers were trained to build camps, forts, as straight as possible. The roads were built to enable their army to travel easily to distant parts of the empire. The Roman traders used the roads to bring many things form faraway lands. Some of these roads are in use till today. In order to make a road across a deep mountain valley, they built tall bridges called vitaducts. Some of these Roman bridges are still in use today. 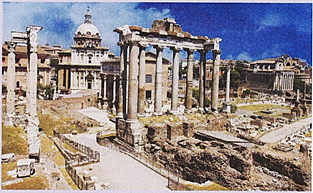