2.            Chandragupta I was the first important king. He was succeeded by his son Samudragupta.

3.            Allahabad Prashasti is one of the most important sources of information. It was engraved on the Ashokan pillar in Kausambi near Allahabad.

4.            The glory of the Gupta Empire reached its pinnacle under Chandragupta II, who took the title of Vikramaditya.

5.            The Chinese pilgrim Fa-Hein visited India during the reign of Chandragupta II. His book is a valuable source of information about the Gupta reign.

6.            Harshavardhana built a strong empire after the downfall of the Guptas.

7.            The Chalukyas were a powerful dynasty ruling in the region between the River Krishna and the Vindhyan Mountains.

8.            Pulakeshin II was the most outstanding of the Chalukya rulers. He defeated Harshavardhana.

9.            The Pallavas established their kingdom that extended from Northern Orissa to Tanjore in the south.

Starting 320 CE to 550 CE, the Indian subcontinent witnessed one dynasty rise which set the model of a classical civilisation. The period was marked by extensive inventions and discoveries in science, technology, engineering, art, literature, logic, mathematics, astronomy and philosophy. Historians have therefore named this period as the Golden Age of Indian History.

Have you ever heard of a Prashasti7 In Sanskrit, the word means 'in praise of. These were composed in praise of some ruler. There is a famous Allahabad Prashasti. It is a stone pillar inscription. It was engraved on the Ashokan pillar in Kausambi near Allahabad. It is one of the most important sources of information about Samudragupta who was a famous ruler of the Gupta dynasty. It was composed by Harisena, the court poet and minister of Samudragupta in the 4th century CE.

WHAT THE ALLAHABAD PRASHASTI TELLS US

The Prashasti gives a vivid description of the reign and conquests of Samudragupta. It tells us about his capable personality and his succession to the throne and his coronation. He is also described as a compassionate ruler concerned about the welfare of his subjects. Also, he was an excellent warrior. The Prashasti portrays Samudragupta as not just a conqueror, but also a great poet, musician and patron of learning. He is described as Kaviraja (king of poets). His love for music is attested by his gold coins which show him playing the veena. 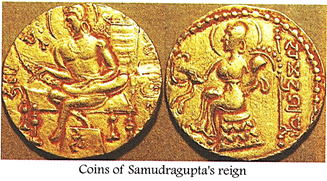 Samudragupta performed the Ashwamedha sacrifice though this is not mentioned in the Allahabad Prashasti. He had special gold coins issued with the picture of the sacrificial horse.

In the\[Aryavrt{{a}^{1}}\]region there were nine kingdoms conquered by Samudragupta. They became a part of the Gupta Empire. Twelve kings of Dakshinapatha are said to have been defeated and captured and later released. The rulers of the South merely paid him homage and tribute and they were reinstated. The Prashasti also mentions the names of the foreign kings who paid homage and swore allegiance to Samudragupta. They also offered their daughters in marriage to him.

Q. Why do you think the kings offered their daughters in marriage to Samudragupta?

The Guptas rose to power and acquired political control in the region of Magadha in the 2nd decade of the 4th century CE. The first known king was Srigupta who founded the Gupta Empire. The Poona copper inscription describes him as Adhiraja of the Gupta dynasty. He was succeeded by Ghatotkacha (280-319 CE) who 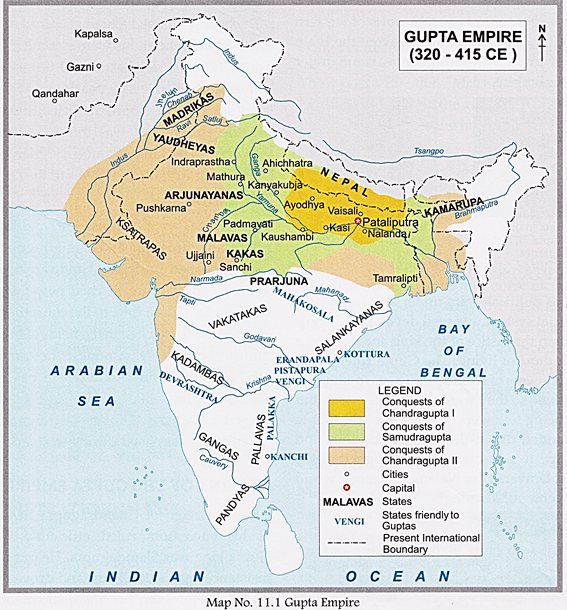 was referred to as Maharaja. Chandragupta I was the first important king. He was referred to as Maharajadhiraja meaning 'great king of kings'. His accession to the throne in 319 CE marks the beginning of the Gupta era. He married Kumaradevi, the Lichchhavi princess. Chandragupta I was succeeded by Samudragupta who used the same title as his father. Also, he has been called 'Napoleon of the East'.

Samudragupta's son was Chandragupta II. He is very often referred to as Vikramaditya. He defeated the Sakas and seized western India. This made his empire much more prosperous because he got control over the ports of western India. Surat and Broach, which were the main centres of trade with Europe, now came under the Gupta Empire.

There was political unity under the Gupta rule. The judicial system was well developed. People had faith in the justice of the king and enjoyed a high standard of living. The Gupta rulers were ardent followers of Hinduism. They worshipped Lord Vishnu, so they were called Vaishnavas. But despite being followers of Hinduism, the Gupta rulers funded the institutions of Buddhist and Jain faiths. It was during their reign that the Buddhist University of Nalanda became a world famous center of learning.

A Sanskrit inscription in Brahmi script on an iron pillar near Qutb Minar refers to a king named Chandra. This king has been identified as Chandragupta II because he is referred to as Chandra on his coins.

The Golden Age of Indian History

A "Golden Age" is a period of time when the arts and the economy of an area are at their peak and there is peace and prosperity. The prosperity of the Gupta Empire is indicated by the discovery of gold and silver coins issued by the Gupta rulers. The Chinese traveler Fa-Hein who visited India during the Gupta rule writes that the people did not lock their houses as there was no fear of thieves.

The people enjoyed a high standard of living.  The main occupations were agriculture, trade and industry. Domestic and foreign trade flourished. Items like pearls, ivory, textiles and spices were exported. Agriculture thrived in the empire and was the main source of revenue. The king promoted agriculture by providing irrigation facilities to the farmers.

The Guptas were patrons of art and learning. Both Chandragupta and Samudragupta were accomplished musicians. Hindu art, literature, science and culture reached new milestones during the Gupta rule. In the court there were persons who excelled in the fields of literature, music, science etc. Amongst these men was the literary genius Kalidas. He has written famous plays like Abhijnana Shakuntalam. Aryabhatta, the famous astronomer and mathematician, lived during this period.

DECLINE OF THE GUPTA EMPIRE

After the reign of Chandragupta II, only two of his successors ruled efficiently. The last Gupta king was Skandagupta. He put up a stiff resistance against the Huns and drove them out of India. However, his weak successors could neither check the continuing Hun attacks nor the revolts by the governors. Consequently, the Guptas disappeared as an independent political force in the second half of the 6th century.

After the Guptas, the only empire that became powerful in the north was set up by Harshavardhana. We know this from coins, inscriptions and his biography 'Harshacharita' written by Banabhatta, his court poet. Hieun Tsang, a Chinese pilgrim has also left interesting accounts of Harsha's reign.

Harshavardhana was the younger son of the ruler of Thaneshwar. His elder brother ascended the throne, but he was killed. At the tender age of sixteen, Harsha ascended the throne and took on all the responsibilities in 606 CE. After his brother-in-law who was the ruler of Kanauj died, he became the king of both Thaneshwar and Kanauj. He pursued an expansionist policy and conquered large parts of northern India. He was determined to establish a single, unified and stable kingdom in India. However, when he tried to go beyond the Narmada River and go south, he was defeated by the Chalukya king, Pulakeshin II.

Harsha believed in Buddhism and held an assembly at Kanauj to discuss Buddhism. Another meeting was organised at Prayaga.

Hieun Tsang, in his book Si-yu-ki, describes Harsha as a righteous and brave. He also gives a vivid description of the beauty, splendor and prosperity of Kanauj.

ADMINISTRATION IN THE KINGDOMS

The post of the Maha-danda-nayaka was hereditary. Though the officers worked under the king, sometimes the hereditary posts proved to be disadvantageous.

Q. Why did hereditary posts prove to be disadvantageous sometimes?

The rulers maintained a strong standing army. Cavalry, war elephants and horse archery were important parts of the army. In times of need extra soldiers were provided by the samantas. They were granted land and the revenue collected was used to maintain small units of soldiers and war equipment. However, whenever the king was weak, the samantas broke free of his supremacy and founded their own kingdoms.

The caste system was practiced. The Brahmins were superior and spoke in Sanskrit while the common people spoke in Prakrit. The untouchables were badly treated. They lived in the outskirts of the city. If they entered the city, they had to keep themselves away from other people and avoid touching them.

KINGDOMS OF THE SOUTH CHALUKYAS

A number of small kingdoms came to power in the south but the most powerful were the Chalukyas. They ruled over the area between the river Krishna and the Vindhya Mountains between the 6th and 12th century CE. Their territories spread across Karnataka and Andhra Pradesh. Their capital was at Aihole.

The reign of the Chalukyas is known as the Golden Age of Karnataka.

Pulakeshin II was the most outstanding of the Chalukya rulers. Pulakeshin means 'great lion?. His court poet was Ravikirti who has composed a Prashasti at Aihole. According to him, Pulakeshin waged many wars and expanded his empire. He annexed Varanasi and parts of the Pallava territories. His most notable success was against King Harshavardhana on the banks of the Narmada.

Hieun Tsang, the Chinese traveller visited the Chalukya kingdom during the rule of Pulakeshin II. According to him, Pulakeshin was an excellent administrator. He ruled over 99,000 villages. He had a very strong and well organised army. This was perhaps the reason for his successful conquests.

According to Hieun Tsang, hundreds of elephants of Fulakeshin army were intoxicated before going into battle.

Pulakeshin also performed the Ashvamedha sacrifice. However, he was defeated and killed by the Pallava king Narasimhavarman in 642 CE. Finally, the Chalukya dynasty was defeated by the Rashtrakutas.

The Pallava kingdom extended from Northern Orissa to Tanjore in the south. Their capital was Kanchipuram. Conflict between the Chalukyas and Pallavas was common. Narasimhavarman defeated Pulakeshin II and gave himself the title of Mamalla. Finally, the Pallava dynasty was defeated by the Cholas.

The Roman Emperor was at the highest \[run{{g}^{2}}\] of the administrative system. He served as the military commander-in chief, high priest, court of appeal, and source of law. Soldiers swore their oath to him instead of a constitution or a flag. All political matters were intensely personal. Military loyalty, bureaucracy, and imperial succession were all viewed in personal terms. This concentration of power led the emperor into assuming the role of a universal patron. The main governing council of the Roman Republic was the Roman Senate. Senate comes from the word senatus meaning ?old man? or ?elder?. The Senate is therefore a council of elders which gives advice on the day- to- day running of the state. 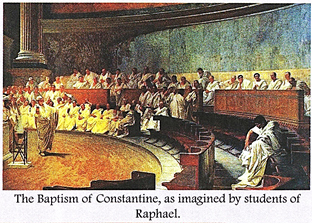