Development in Art and Architecture

1.            India?s rich cultural heritage is the crowning glory of the Indian civilisation.

4.            Beautiful paintings called murals adorn the walls, ceilings and pillars of the Ajanta Caves. The technique of painting is known as fresco-secco.

5.            Our heritage includes many great literary works which serve as important sources of study of ancient India. The Mahabharata and Ramayana are some examples.

6.            Panchtantra and Jataka Tales are short stories with moral lessons from everyday life.

9.            Charaka Samhita and Sushruta Samhita are ancient texts on medicine.

Indian?s rich culture is the crowning glory of Indian civilisation. The multitude of literary works and the magnificent architecture of ancient India are testimony to India?s\[legac{{y}^{1}}\]. Numerous monuments all over the country stand witness to the glory of India. There is voluminous wisdom and knowledge in the literary tradition. These are important sources of history and help us to reconstruct and understand the past.

Have you seen or heard about the iron pillar at Mehrauli in Delhi. It was made about 1500 years ago and has not rusted till now. This tells us about the remarkable metallurgical skills of the Indian craftsmen in ancient times. The Iron Pillar is about 22 ft. high and weighs 6 tons. It is said to have been built at the time of Chandragupta Vikramaditya. It has a Sanskrit inscription in Brahmi script. It mentions a king named Chandra who is probably Chandragupta II of the Gupta dynasty.

The word stupa literally means 'a heap7. A stupa is a domed building which houses Buddhist relics. These can be bones, ashes or teeth of the Buddha or things used by him and sometimes coins or precious stones. These are generally kept in box in the centre of the stupa. This relic box is covered by a layer of bricks and stone slabs. Stupas became an important part of Buddhist monasteries. The shape of the stupa has come to represent the Buddha, crowned and sitting in meditation. There are many stupas but the most important ones are located at Sanchi, Sarnath, Amravati and Bodhgaya.

Q. Why do you think stupas are located at Sarnath and Bodhgaya? 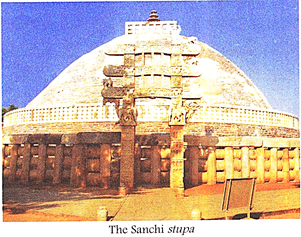 See the picture of the Sanchi Stupa. It was built by Emperor Ashoka. It is a large hemispherical done. There is a central chamber in which the Buddha's relics have been placed. There is a path around the stupa. This path called pradakshina is surrounded by railings. There are four elaborate gateway through which devotees can enter and walk around the path in a clockwise direction. The carvings on the gateways depict events from the Buddha's life and previous births. 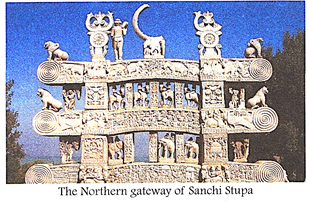 In the carvings of the Sanchi Stupa, the Buddha has been shown symbolically as a tree or some other inanimate figure like a wheel.

The Amarvati Stupa in Andhra Pradesh was neglected and was in ruins with the decline of Buddhism in India. Its distinguishing feature is that it depicts the Buddha in a human form subduing an elephant.

Many temples were built in India. These were dedicated to different gods like Shiva, Vishnu and Goddess Durga. The three main components of the temples were:

?   Garbagriha: This housed the deity of the temple. Here the priests offered prayers to the diety. It was provided with a \[circumambulatio{{n}^{2}}\]passage around.

?   Mandapa: This was the pillared hall where the devotees could assemble.

?   Shikhar: The tower above the sanctuary and the mandapa.

One of the earliest Hindu temples is the Shore Temple at Mahabalipuram built by the Pallavas. It is a five storeyed structure made of blocks of granite. It is not carved out of rock. It is dedicated to both Shiva and Vishnu. 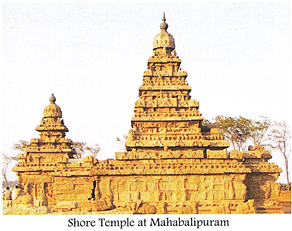 The Shore Temple was built m such a way that the rays of the rising sun light up the temple. The same is reflected on the waters after sunset.

The ratha (chariot) temples at Mahabalipuram are monolithic temples carved out of granite rocks. These five temples have multi-pillared and sculptured halls. The Durga Temple at 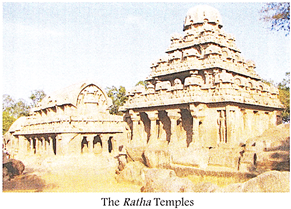 Aihole in Karnataka was built by the Chalukyas about 1400 years ago. Many important temples and caves are found at Aihole. It is also called the 'Cradle of Indian architecture?. 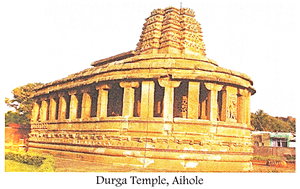 Bhitargaon is one of the oldest temples established in Uttar Pradesh state. Basically this temple is an architectural example of brick art of ancient era. Built in the 5th century during the Gupta Empire, it is the oldest remaining Hindu shrine with a roof and a high Shikhar.

The construction of stupas and temples was a long process. First, the ruler chose an appropriate site for the construction. Construction involved huge amounts of money so it was usually the ruler who took the decision. Then, the material for construction had to be procured. Good quality stone was identified, quarried and then transported to the construction site. Here the carved panels were prepared and placed according to the planned design. Though the ruler spent money on the construction, different craftsmen also contributed in their own ways Metalworkers, garland makers, ivory workers and many others paid for the decorations. Often their names were inscribed on the walls or pillars of the monument.

The Ajanta Caves situated in Maharashtra are among the most famous Buddhist caves in India. They are a World Heritage\[Sit{{e}^{3}}\]. All these caves exhibit excellent architectural skills. The caves also have paintings which are masterpieces made by skilled hands.

Beautiful paintings called murals adorn the walls, ceilings and pillars of the Ajanta Caves. The technique of painting is known as fresco- secco. They are bright and vivid till now. These paintings were done in the dark caves with the help of torches. These frescoes depict many scenes from the everyday life in cities and villages.

A thick layer of mud mixed with vegetable material was applied on the rock surface. This was covered by a thick layer of plaster. This formed the base surface of the painting. The painting was done with the help of pigments mixed with gum. Brushes were made of animal hair.

Our heritage includes many great literary works which are important sources of study of ancient India.

The epics were written during this period. The Mahabharata and Ramayana were both written in Sanskrit by Ved Vyasa and Valmiki respectively. The Ramayana was passed down by oral tradition before it was written down. The exact time of its writing is not known. It is the story of King Rama and his queen Sita. Rama is the son of Dasharatha. Sita is kidnapped by Ravana, the demon king who is defeated by Rama after a long battle. This epic symbolizes the victory of good over evil.

The Mahabharata is the story of the Pandavas and their victory over their evil cousins, the   Kauravas. It also contains the Bhagvad Gita which is a conversation between Lord Krishna and Arjuna on the battlefield.

Q. Given below is a scene from the Ramayana. Can you identify the scene? 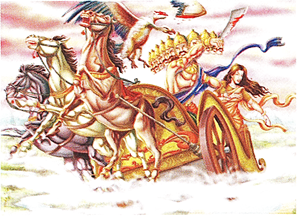 The word Purana literally means old. The Puranas, like other religious literature were first passed down orally and written down much later. There are 18 Puranas. They contain myths and stories of gods and goddesses and the ways of worshipping these gods. They also tackle philosophical questions. Some of the important ones are Vishnu Purana and Shiv Purana. The Puranas serve as guide books for life. Written in simple Sanskrit, they were recited in temples by the priests. All were allowed to hear them, even the lower castes.

Silappatikaram was written by Ilango Adigal, a Buddhist monk. It dates back to the 5th century CE and involves three ancient Tamil kingdoms- Chera, Chola and Pandya. The epic vividly describes the Tamil society of that period, its cities, the people's religious and folk traditions and their gods.

King Dushyanta describes Shakuntala: She seems a flower whose fragrance none has tasted,

A gem uncut by workman's tools,

A branch no desecrating hands have wasted, Fresh honey, beautifully cool. No man on earth deserves to taste her beauty her blameless loveliness and worth,

Unless he has fulfilled man's perfect duty- And is there such a one on earth?

This is regarded as the oldest surviving text on stagecraft in the world. Written in Sanskrit, it tells us that Natya or drama was created to give pleasure to tired minds. It deals with all aspects of dramatic performances like acting, speech and expressions. It also discusses plots of plays, dialogues and characters. It gives details of the music and instruments of that period.

These are stories written by the common people. The Jataka Tales are short stories written in the 3rd century BCE. They teach morals and values. Originally written in Pali, they are about the previous lives of the Buddha. Scenes from these tales have been carved out on stupas and painted on the walls of the Ajanta Caves.

Panchatantra are also a collection of short stories each of which teaches a moral. The stories are presented and narrated by a sage called Vishnu Sharma. Most of the stories are amusing and animals play an important role in them.

In one of his previous births, the Buddha was born as a very generous prince called Vessantara. Once when a drought broke out in Kalinga, he gave away the magical white elephant of his kingdom to Kalinga. It possessed the supernatural power of bringing rain. His father was extremely angry and banished him from his kingdom along with his wife and children. On his journey, he gave away his chariot also. He began living a simple life in a hut in the forest. A greedy brahmin who lived by begging asked him to give away his children and later his wife too. He did as he was told. All this time, the Gods were testing his generosity. They were very happy with Vessantara. They returned him everything that was rightfully his. He was reunited with his wife and children. His father also accepted him back. 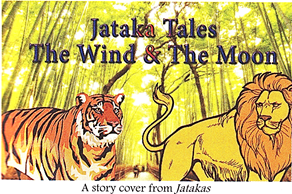 BOOKS ON SCIENCE AND MATHEMATICS

Aryabhatta was a famous astronomer and mathematician. He wrote the Aryabhatiyam in which he has described that planets move around the Sun in circular epicycles. He has explained how eclipses were caused. He was the first to discover that the earth rotates on its axis daily. He also invented the decimal system and how to calculate square and cube root. 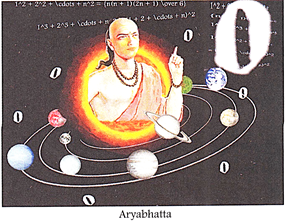 Aryabhatta Varahamahira was another astronomer and mathematician. He wrote the Brihat Samhita which tells us how to ascertain the value of metals and stones, to distinguish good breed of animals and to make trees bear fruit out of season.

The earliest texts on medicine are Charaka Samhita and Sushruta Samhita. The former is dated about 2nd century BCE and is a comprehensive text on Ayurveda dealing with the diagnosis and treatment of diseases. The latter deals with doctor's training, surgery, the treatment of wounds, symptoms of diseases and anatomy.

Aryabhatta is regarded as the ?Father of Algebra?

Most people in medieval Europe did not know how to read but they learnt a lot by looking at pictures. People learnt about Christianity from the paintings, carvings and stained glass windows in their local churches, and preachers used these image to illustrate their teachings. Even the smallest churches had vivid paintings in their walls and simple carvings inside and outside. Large churches and cathedrals were decorated with stained glass and cathedrals were decorated. Skilled artists painted beautiful religious pictures on wooden panels. These paintings decorated the churches and inspired people to worship. The artists did not try to make realistic pictures. Instead, they aimed to create an impression of heaven by paintings scenes with glittering golden backgrounds. 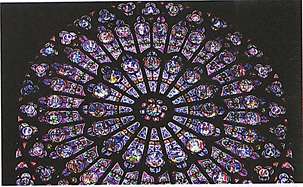