Air, water and weather are the important components for the survival of all kinds of living organisms on the Earth. Now a days, air is getting polluted by the activities of living organism and also by the natural phenomena like, eruption of volcanic ash, fire in the forest, etc.

Water is another important component for the living organism to survive. Living organisms are present both on land and water. Earth has only a small portion of potable water which is found below the ground, in glaciers and in rivers. The water in the sea is not potable due to the presence of huge amount of salt in sea water. Weather of a place depends to a large extant on the condition of air and water of that place. In this chapter, we will study about air, water and weather.

Air is the mixture of different gases. It mostly consists of nitrogen gas. Oxygen is the second most available gas in air. The other gases are in less amount. The atmosphere of the Earth is layered and each layer of the atmosphere depends on the density, hotness and coldness of the air. The air closest to the earth surface is denser than the air at higher altitude. Therefore, the density of air or air pressure decreases on increasing altitude. The atmosphere of the Earth protects us from the dangerous ultraviolet rays radiated from the Sun. Dry air has 78.09% nitrogen, 20.95% oxygen, 0.93% argon, 0.039% carbon dioxide and small amount of other gases.

Air as the Mixture of Gases

In the picture below, one third of the tub is filled with water (mixed with acoustic soda and ink) and a burning candle is placed in it. The tub is covered with a jar which does not allow the air to pass in the tub.

After some time, the candle will stop burning and coloured water will rise to fill the vacuum formed by burning of air components (oxygen). This happens because; acoustic soda absorbs the carbon dioxide formed by the burning of air components. A vacuum is created on empty portion of water containing jar due to the absorption of carbon dioxide by the acoustic soda and therefore, water rises to fill the vacuum. From this experiment we can arrive at the following conclusion:

(i) Air has oxygen which helps the burning of candle.

(ii) Air has carbon dioxide which does not help the burning of candle.

So we can say air is the mixture of different gases.

Every empty space is filled with air. Air is invisible with no smell and taste. The moving air is called wind. Fast moving air, called storm may destroy the life and property on Earth.

Take a water filled bucket and an empty glass to understand that the air occupies space. Put the empty and inverted glass into the water. No water will enter into the glass as the space inside the glass is still occupied by the air.

Now, tilt the glass slightly. You will find bubbles of air is rising up ward and water is pouring into the glass. That means water is taking up the space which has been emptied by the air in the glass. So we can say that the air takes space.

Air Dissolves in Water which Support the Life of Aquatic Animals

Take a water filled pan and put it on the burner for heating. Bubbles of air from the bottom of the pan will go upward from the water. If we boil the water again immediately after cooling, no bubbles of air are seen . It means, the air which was mixed in the water has been removed by heat. Therefore, air dissolves in water.

Air does not have Colour or is Colorless

Layers of the Earth's Atmosphere

Look at the following picture of the layers of the earth's atmosphere: 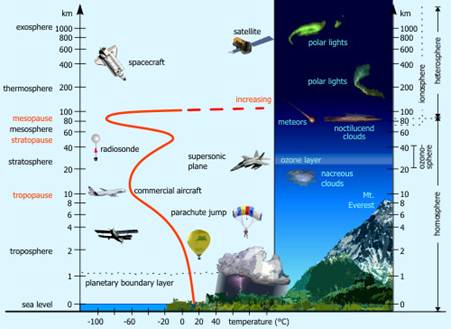 Mesosphere extends upto the distance of 50 km above the stratopause. Most of the meteors melt or vaporize when enter into the mesosphere. Meteors burn due to the collision with the gas particles. In this layer, temperature decreases with increasing altitude. The boundary at which temperature is below 130 K is the coldest place and known as mesopause. Decreased temperature at the mesopause is due to the less heating of gas particles by solar energy and cooling of carbondioxide.

Strong zonal (East to West) winds, gravity waves, atmospheric tides are the main features of the mesosphere. The ionosphere is located in this layer.

Thermosphere covers the large part of the earth atmosphere, which is about 120 km above the mesopause and below the exosphere. In this layer, ionization happens due to the ultraviolet radiation. Temperature in this layer increases with increasing height due to highly energetic solar radiation. The temperature in the thermosphere can be raised upto 2400°C during day. The atmospheric particles in this layer become electrically charged which support the radio waves for the reception in the space. In this region, a zone is called an acoustic zone prevents the transmission of sound.

Air is the most important life supporting elements for all kinds of living organism. Now a days, it is polluted by the excess emission of unwanted substances by us. Balancing of components of air is necessary for the life of all kinds of living organism. The excess emission of carbon dioxide by the industry causes the unbalance of air components. Air pollution is the mixing of unwanted substances in the air which is dangerous for lives. Air is not polluted by human activities alone, natural phenomena, like, ash and other harmful substances from volcanic eruption etc. also causes the air pollution.

Sulfur Oxide as an Air Pollutant

Nitrogen Dioxide (NO2) as an Air Pollutant

It is one of the most prominent air pollutants. Electric heater and gas stove also produce nitrogen dioxide. Excess concentration of nitrogen dioxide in air causes the respiratory illness and harmful for the lung of the adult human.

Carbon Dioxide as an Air Pollutant

Carbondioxide is the green house gas. Ocean water is also affected by the excess concentration of carbondioxide in the air which causes the ocean acidification.

Carbon Monoxide as an Air Pollutant

Carbon monoxide is mostly emitted by the combustion of fuel by the vehicles. It is produced when less amount of oxygen is available which causes the less or partly combustion of the carbon containing substances. Carbon monoxide burns and produces blue flame and carbon dioxide. It is highly toxic for human and animals.

Which one of the following gases is highly concentrated in the air?

The concentration of nitrogen in the air is about 78 %. Therefore, option (c) is correct and rest of the options is incorrect..