1. Air is a natural resource

2. We cannot see air but can feel it

Air is also an important natural resource. Air is present everywhere, in water, around us, in soil and within plants and animals. Life on Earth is not possible without air. Air cannot be seen lent it can be felt. When air blows hard, leaves and branches start moving. This movement signifies presence of air. Strong moving air is called wind and strong winds cause storms.

Presence of Air: We can feel air when we switch on a fan. We feel the cool breeze (air).

Atmosphere: The thin layer of air surrounding the Earth is called the atmosphere. All plants and animals need air to breathe. 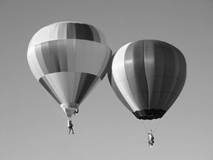 \[\to \]Air cannot be seen but it can be experienced.

(1) Air is a mixture of gases. Oxygen is the active part of air and make up about one fifth of air by volume.

(2) When certain substances are burnt in air, they combine with oxygen.

So air is a mixture and not a compound.

Composition of dry air. Dry air is without water vapour

The combustion of petrol releases poisonous gases like carbon monoxide, nitrogen dioxide, nitrogen monoxide, lead, dust etc. which mixes with air and pollute it. Impurities from factories like sulphur dioxide, dust and smoke get mixed up with air.

(a) Nitrogen: Air contains 78% of nitrogen. It occupies about 4/5th of volume of dry air. Nitrogen is inert gas but it is needed by plants and animals for making amino acids.

To show that plants produce oxygen during photosynthesis

Take a beaker half filled with water and place a water plant (say, Hydrilld) in the beaker. Invert a glass funnel and place it over the plant and cover the open-end of the funnel with a test tube. (Before doing so, fill the test tube with water and cover its opening with your thumb. Then, invert the tube into the funnel.).

Place the beaker in sunlight and observe. You will notice bubbles of gases capping from the leaves of the plant and filling the test tube. Introduce a glowing splint near the mouth of the test tube. It continues to glow, proving the presence of oxygen gas in the air. 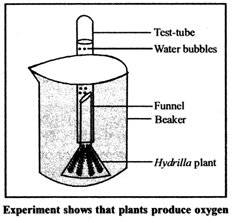 Plants produce oxygen during the process of photosynthesis and liberate it into the atmosphere.

To show oxygen is used in burning

Fix a candle in the center of a trough. Fill the trough with water more than half.

When all oxygen is consumed in burning, the candle extinguishes. 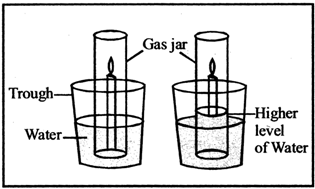 Experiment shows that oxygen is required in burning

1. Oxygen is necessary for breathing and burning.

2. It is needed in hospitals for artificial respiration.

3. Mountaineers, sea divers and astronauts carry oxygen cylinders with them as supply of oxygen decreases as we go up.

4. Oxygen is needed by aquatic plants and animals.

5. It is used for welding purposes and for cutting of metal at high temperatures.

6. Liquid oxygen is needed in rockets for combustion of fuels.

(c)  Carbon dioxide: Carbon dioxide occupies a very small percentage of air but is very important for existence of all plant life. It occupies0.02 - 0.04% of air by volume. It is released during

(i) combustion of fuels like coal, diesel, petrol, etc.

(ii) the process of respiration.

1. It is used as a fire extinguisher since it is heavier than air and does not bum.

2. Solid Carbon dioxide is called dry ice. It is used as a refrigerant.

3. It is used in preparation of aerated drinks like soda water etc.

4. Plants use carbon dioxide to prepare their own food by the process of photosynthesis. Oxygen is given out during the process.

(d) Water Vapour: Air contains water vapour. We know this because when air comes in contact with a cool surface, water drops are seen. 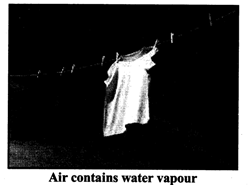 The clothes dry on clothesline. The water from wet clothes evaporates and form water vapour. This mixes with air. Amount of water vapour in air is called humidity.

(e) Dust and Smoke: Dust particles can be seen in a beam of sunrays.

These dust particles are present in air. Content of dust particles vary from time to time from place to place. When it rains, dust particles in the atmosphere settles down. That is why weather is clean after rainy season. 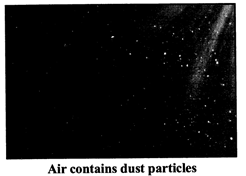 The air that we breathe out is saturated with water. Through this we can lose about one third of a litter of water every day.

Air support life - All living things breathe in oxygen. Oxygen is needed to get energy from food. Living things on land breathe in oxygen present in air. Their that is taken in through nose enters the lungs. Here the oxygen is absorbed from the air and used by the body.

Living things that line under the soil breathe in air present in soil. If you put water on the soil you may see some bubbles of air. This is because air is trapped between soil particles which escape when water is added. Plants that live in water logged soil such as mangroves, have roots that grow out of the soil to get air. 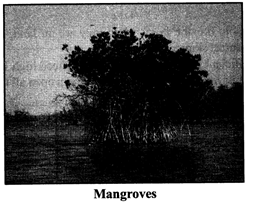 To prove that the soil also entraps air (oxygen).

Take a lump of dry soil in a beaker. Add some water to it. Do you observe bubbles start coming out from the soil. Yes, it is air entrapped in soil. Organisms living in burrows and holes formed in deep soil get this entrapped air.

But, when it rains heavily, these burrows and holes are filled with water, air is expelled. It becomes very difficult for these animals to remain there. So they come out of burrows and holes.

Insects like cockroach and housefly take in oxygen through tiny holes in their body called spiracles.

Leaf has pores on both surfaces (called stomata) for exchange of gases.

How do fishes and other aquatic animals breathe in water?

Where from the aquatic animals get oxygen?

Have some water in a beaker. Heat is slowly on a tripod stand. After sometime, you can observe lot of bubbles at the bottom of the beaker, which start rising up and break up at the outer surface of water. Where do these bubbles come from? These bubbles are mainly of oxygen present in air which has been dissolved in water. Aquatic animals use this oxygen and survive.

Plants have small openings called stomata on the lower side of leaves through which air is taken in. Plants that float on water like water lily have stomata on the upper surface. Underwater plants like tape grass have no stomata. They breathe in oxygen dissolved in water through their body surface.

Amphibians like frog, newt and salamander need systems for breathing both in air and water. Crocodile and alligator swim with the snout above water surface to breathe easily through nostrils.

Frogs have lungs to breathe in air when they are on land. In weather they breathe through moist skin.

Birds have an efficient respiratory system. They need high levels of oxygen during flight. Their lungs have air sacs that remain open all the time.

Earthworms respire through their skin surface that is moist due to mucous.

Mammals breathe with the help of lungs. They take in oxygen and give out carbon dioxide.

Balance of oxygen: The amount of oxygen in the atmosphere remains constant because of oxygen and carbon dioxide cycle that operate together in nature.

All animals breathe out carbon dioxide. Plants take in carbon dioxide and exhale oxygen. Humans and other animals inhale oxygen. This process goes on forever. Plants and animals are interdependent on each other.

Some human activities however disturb this balance. Such activities include deforestation, use of fossil fuels, pollution, industries, etc.

Other uses of Air

1. Windmill runs with the help of air. It is used to generate electricity.

2. Gliders, parachutes, yachts and aircraft all need air to sail and fly. 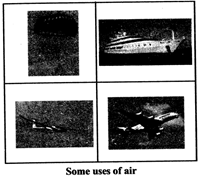 4. Some fruits and seeds need air to disperse their seeds.

5. Air is needed for winnowing.

6. Tyres are filled with air to run vehicles.

Ozone: There is another layer of gas called ozone in the upper atmosphere. It prevents harmful rays of the sun from reaching Earth. These are ultraviolet rays and may cause skin cancer and eye problems.

Role of Atmosphere: Atmosphere causes weather changes. When the sunshine’s brightly, it heats the Earth. The air also gets heated. Hot air rises and cold air pushes in to take its place. This is how wind blows. Blowing of storms and cyclones is also due to movement of air. The water vapour in the air is responsible for rainfall and snowfall. Thus the atmosphere is responsible for weather changes. The atmosphere helps to maintain the temperature of the Earth. The heat of the sun is partly absorbed by the atmosphere, and partly is reflected back. This prevents the Earth from becoming very hot during the day. At night the trapped heat prevents the Earth from cooling down too much.

Thus the atmosphere acts as a blanket around the earth and helps to keep the earth’s surface at right temperature for life to exist. 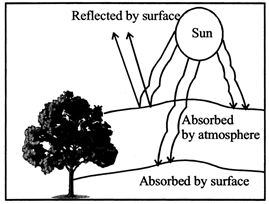 Air pollution: Air is getting polluted day by day due to some human activities.

Some major causes of contamination of air are

Due to poor quality of air, people find it difficult to breathe. It may cause diseases like asthma and lung cancer. It also affects plant life and crops.

Atmosphere: It is the thick blanket of air surrounded the Earth's surface.

Gravity: The pull of the earth on bodies

Humidity: Amount of water vapour present in air at any place and time.

Ozone: A gas present in upper atmosphere that prevents us from harmful ultraviolet rays of the sun. 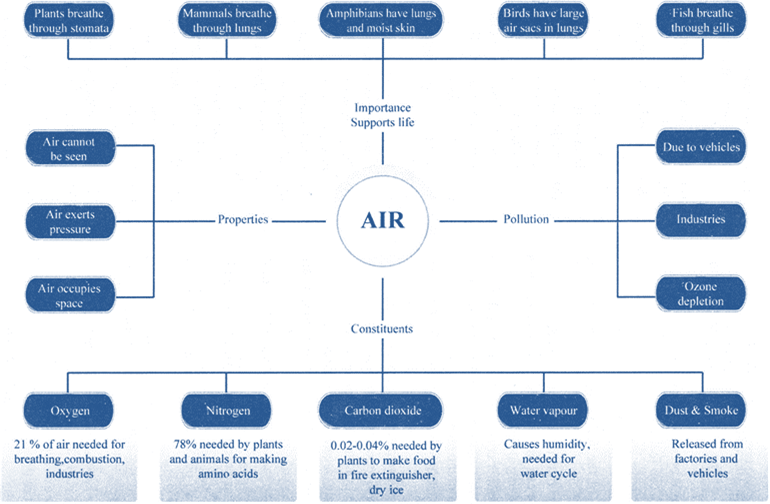 Notes - Air Around Us