A collection of information in the form of numerical figures is called data.

The branch of mathematics which deals with the collection, presentation, analysis and interpretation of numerical data is called statistics.

A dice was thrown 30 times and the following outcomes were noted:

Represent the above data in the form of frequency distribution.

Explanation: We may present the data as shown below:

The representation of information through pictures is called a pictograph.

The following pictograph shows the number of computers sold by a company during a week.

A bar graph is a pictorial representation of the numerical data by a number of bars of uniform width erected horizontally or vertically with equal spacing between them.

Given below is the bargraph showing the number of scooters produced in a factory during the first five months of a year. 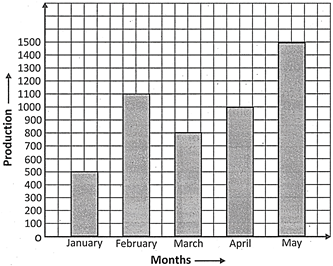 Direction: Questions 1 and 2 are based on the following pictograph.

The following pictograph shows the number of balls sold by a shopkeeper on different days of a week.

On which day the maximum number of balls were sold by the shopkeeper?

Explanation: It is clear from the pictograph that maximum number of balls was sold on Thursday.

How many balls were sold on Tuesday?

Direction: Questions from 3 to 5 are based on the following bargraph.

In a survey of 130 families of a colony, the number of children in each family was recorded and the data have been represented by the bar graph given below. 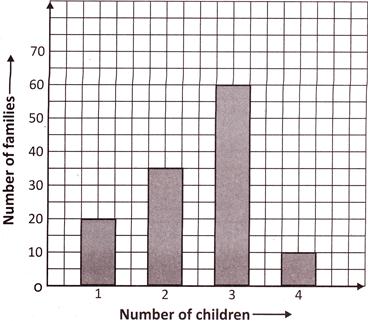 How many families have 3 children?

Explanation: It is clear from the bargraph that 60 families have 3 children each.

How many families have no child?

How many children do the maximum number of families have?

Explanation: It is clear from the bargraph that the maximum number of families have 3 children.