All the other numbers are written using 10 symbols. 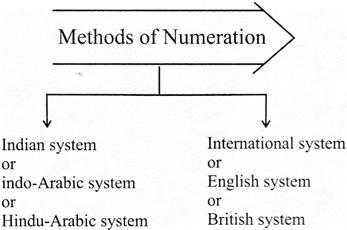 A comma is inserted after each period in Hindu-Arabic system as well as British system.

It may "be note that no numerals can be repeated more than 3 times. Repetition is allowed only for symbols I, X and C.

Note: A number line drawn vertically, helps to know the heights above the and below the sea levels which are denoted by positive and negative signs respectively.

Absolute value of an integer

If x represents an integer then,