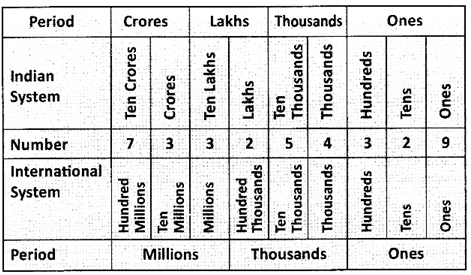 Note:    A Comma is inserted each period in both the systems.

The face value of a digit is the value of the digit itself.

To write a number in expanded form, start from the left-most digit. Write the digit in the given number followed by as many zeroes as the number of digits to its right. Place a + sign before writing the next digit. Continue this until the right-most digit is written.

e.g.. The expanded form of

(ii) If the number of places is equal then compare the value of the digit present from place to place from left to right in both the numbers. The number with greater value is greater.

Rule 1: If a symbol is repeated, its value is added as many times as it occurs.

Rule 2: When a symbol of smaller value is written to the right of a symbol of greater value, its value is added to the value of the greater symbol.

Rule 3: When a symbol of smaller value is written to the left of a symbol of greater value, its value is subtracted from the value of the greater symbol.