All heavenly bodies like sun, moon, earth comes in our universe. 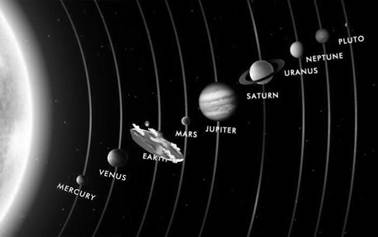 The planets which revolve closer to the sun are inner planets. These are: Mercury, Venus, Earth and Mars-

Jupiter, Saturn, Uranus and Neptune are outer planets of the solar system.

Our earth has one moon which revolves around the earth. The Moon of earth is also called its natural satellite. The moon does not have its own light.

Movement of earth on its own axis is called rotation of the earth. Earth takes 24 hours to complete one rotation.