Fixing the sex of an individual as it begins life is called sex determination. The various genetically controlled sex-determination mechanisms have been classified into following categories

(a) XX-XY type or Lygaeus type : This type of sex-determining mechanism was first studied in the milk weed bug, Lygaeus turcicus by Wilson and Stevens. Therefore, it is called Lygaeus type. These are two different patterns of sex determination in Lygaeus type.

Example : In Drosophila total number of chromosomes is eight, of which six are autosomes, common to both male and female. The fourth pair is of sex chromosomes. In male this is represented by XY i.e. Karyotype of male Drosophila 6+XY and in female XX i.e. 6+XX. Ova produced by female are all similar possessing 3+X chromosomes, whereas the sperm produced by male are 3+X and 3+Y in equal numbers.

(c) Haploid-diploid mechanism of sex determination: Hymenopterous insects, such as bees, wasps, saw flies, and ants, show a unique phenomenon in which an unfertilized egg develops into a male and a fertilized egg develops into a female. Therefore, the female is diploid (2N), and the male is haploid (N). eggs are formed by meiosis and sperms by mitosis. Fertilization restores the diploid number of chromosomes in the zygote which gives rise to the female. If the egg is not fertilized, it will still develop but into a male. Thus, the sex is determined by the number of chromosomes.

In honeybee, the quality of food determines whether a diploid larva will become a fertile queen or a sterile worker female. A larva fed on royal jelly, a secretion from the mouth of nursing workers, grows into a queen, whereas a larva fed on pollen and nectar grows into a worker bee. Thus, the environment determines fertility or sterility of the bee but it does not alter the genetically determined sex. The sex ratio of the offspring in the hive is controlled by the queen. She lays more fertilized eggs that produce worker females and fewer unfertilized eggs which produce haploid males. The queen mates only once in her life time, keeps a store of sperms in the seminal receptacle, and can control fertilization of eggs by releasing or not releasing sperms. 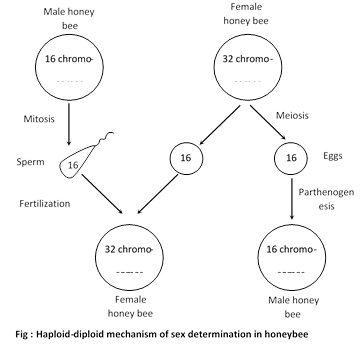 Different types of chromosomal mechanisms of sex-determination in animals

(ii) Quantitative or ratio theory of sex determination: C.B Bridges worked out ratio theory of sex determination in Drosophila. According to this theory the ratio of chromosomes to autosomes is the determining factor for the sex. Single dose of X-chromosome in a diploid organism produces male, whereas 2X-chromosomes produce a female. If a complete haploid set of autosomes is designated by A then 2A : X will give rise to male and 2A : 2X to female.

(a) Intersexes in Drosophila and ratio theory of sex determination: Bridges hypothesis was supported by studies of flies arising after abnormal distribution of chromosomes on account of non-disjunction. Due to abnormal meiosis during oogenesis both the X-chromosomes fail to separate and move to one pole of meiotic spindle. Thus few eggs are formed with single autosomal genome but with 2X chromosomes, i.e. (AXX) and other with single autosomal genome but no sex chromosome (A). when such abnormal eggs are fertilized with normal sperm, the following result are obtained. 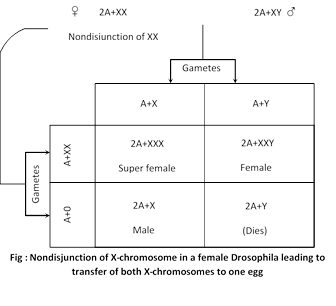 (ii) Triploid intersexes and balance theory: The triploid flies with (3A + 3X) are much like the normal diploid females both in appearance as well as in fertility. On mating to diploid males their progeny consisted of following types. 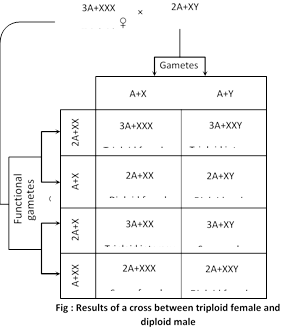 The intersexes are sterile and intermediate between females and male, because the sex balance ratio in the intersexes comes to 2 : 3.

(2) Gyandromorphs in Dorsophila and ratio theory of sex determination: In Drosophila occasionally flies are obtained in which a part of the body exhibits female characters and the other part exhibits male characters. Such flies are known as gynandromorphs. These are formed due to misdivision of chromosomes and start as female with 2A+2X-chromosomes. One of the X-chromosomes is lost during the division of the cell with the result that one of the daughter cells possesses 2A+2X chromosomes and the other 2A+X. If this event happens during first zygotic division, two blastomeres with unequal number of X-chromosomes are formed. The blastomere with 2A+2X-chromosomes develops into female half, while the second blastomere with 2A+X chromosomes produces male half and the resultant fly is a bilateral gynandromorph. The occurrence of gynandromorphs clearly indicates that the number of X-chromosomes determines the sex of the individual. 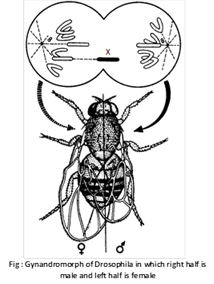 (iii) Genic balance theory : Based upon the observations of ratio theory Bridges put forward genic balance theory in which he suggested that every individual whether male or female possesses in its genotype genes for both male and female characteristics. Which sex will actually develop is decided by the preponderance of that type of genes.

Genes for maleness are carried on the autosomes, those for femaleness on the X-chromosomes. The sex index ratio of female is 1.0 while in males is 0.50. If X/A ratio is greater than 1.0 produces super females (meta females) and less than 0.50 produces super males. The X/A ratio lesser than 1.0 but greater than 0.5 (for example 0.66) result in intersexes. The degree of femaleness is greater where the X/A ratio is closer to 1.0 and the degree of maleness is greater where that ratio is closer to 0.5.

(iv) Hormonal theory of sex determination : The sex determination theories of chromosomes and genic balance successfully apply to the lower animals but in higher vertebrates and under certain conditions in invertebrates, the embryo develops some characters of the opposite sex together with the characters of its own sex-chromosome. It means, the sex changes under specific circumstances. This is due to the hormones secreted by the gonads of that animal.

(a) Free martinism : The influence of hormones on sex determination comes from free-martins often found in cattles. LILLIE and others found that where twins of opposite sex (one male and other female) are born, the male is normal but female is sterile with many male characteristics. Such sterile females are known as free martins.

The scientific explanation for the formation of free martins is the effect of hormones of the male sex on the female. In cattle the foetal membranes of the twins are fused in such a manner that they have a common circulation of blood. The female hormone is produced at a slightly later stage in the development and guides its development towards female side. But since the twins have a common circulation and blood passes from one twin into the body of other twin, the male hormone which is produced slightly in advance of female hormone, enters the body of female twin and before the female hormone onsets the development of female characteristics it is already differentiated in the guidance of male hormone. As a result the developing female is sterile.

(a) In Bonellia, a marine worm, the swimming larva has no sex. If it settles down alone, it develops into a large (2.5 cm) female. If it lands on or near an existing female proboscis, a chemical secreted from her proboscis causes the larva to develop into a tiny (1.3 mm) male. Male lives as a parasite in the uterus of the female. 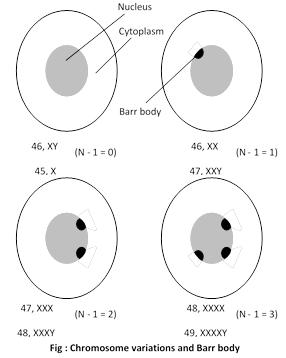 (vi) Barr body in sex determination : Murray Barr (1949), a geneticist noticed a small body in the nucleus of the nerve cells of female cats which stained heavily with nuclear stains. Further investigations showed that not only nerve cells, but many other cells from female cats only, had these bodies, now known as sex chromatin or Barr bodies. It was soon learnt that such bodies can be found in females of many mammals including human. In women the Barr body lies against the nuclear membrane like a round disc in the neutrophil blood cells, skin cells, nerve cells, cells of mucous membrane, cells of lining in vagina and urethra. They are absent in man. These bodies are thus named after the discover Barr.

Barr bodies are used to determine the sex of unborn human embryos. In this technique called amniocentesis sample of the amniotic fluid is examined for Barr bodies. The sex is determined by the presence or absence of Barr bodies in epithelial cells of embryo present in the amniotic fluid sample. Studies from the cells of aborted embryos show that Barr bodies can be distinguished at about 15 or 16th day after conception that means several weeks before the formation of gonads. Whereas sex of embryo is determined soon after fertilization, sex differentiation can be noticed in third week stage of pregnancy.

Sex can also be distinguished by studies of simple blood smears. The neutrophils, the most common of the white blood corpuscles, have a nucleus divided into two or three lobes. Female neutrophils showing a small drumstick extending out from one of the nuclear lobes, is a definite indication of the female chromosome component in the cells.