(1) Nucleus :The benzene ring represented by regular hexagon of six carbon atoms with three double bonds in the alternate positions is referred to as nucleus. The ring may be represented by any of the following ways,

If one atom of hydrogen of benzene molecule is replaced by another atom or group of atoms, the derivative formed is called monovalent substituted  derivative. It can exist only in one form because all the six hydrogens of benzene represent equivalent positions. For example, \[{{C}_{6}}{{H}_{5}}X\], where X is a monovalent group.

When two hydrogen atoms of benzene are replaced by two monovalent atoms or group of atoms, the resulting product disubstituted benzene derivative can have three different forms. These forms are distinguished by giving the numbers. The position occupied by the principle functional group is given as 1 and the other position is numbered in a clockwise direction which gvies lower locatant to the substituents.

Ortho, meta and para are generally represented as o-, m- and p- respectively as shown below,

Aryl group : The radicals obtained by removal of one or more hydrogen atoms of the aromatic hydrocarbon molecules are known as aryl radicals or aryl groups. For example,

The aromatic hydrocarbons may also contain two or more benzene rings condensed together. 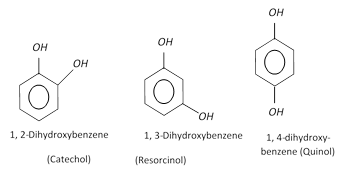 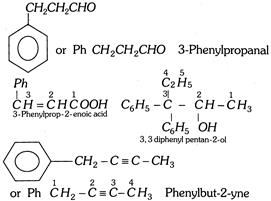 (ii) Disubstituted, trisubstituted or tetrasubstituted benzenes are named by using the numbers for the positions of the substituents.

(iii) If different groups are attached to the benzene ring, then the following rules are kept in mind,

(a) The principal group is fixed as number 1.

(b) The numbering of the chain is done in any direction (clockwise or anticlockwise) which gives lower number to the substituents.

(c) The substituents are written in alphabetical order. For example,