It is our common experience that to move a stationary table, we need to push it or pull it. To stop a moving ball we have to apply some force opposite to its direction of motion. If the object is quite heavy it may not be set into motion by a force. A heavy object in motion may not be brought to rest on applying force on it. Thus based on these observations we can now define force.

Force is defined as an external agent (push or pull) that changes or tends to change the state of rest or 01 uniform motion of a body.

Force is defined as an external agent (push or pull) that changes or tends to change the state of rest or of uniform motion of a body.

Mathematical definition of force - Whenever force acts on a moving body it changes the speed of the body. Thus force produces acceleration (Positive or negative). Greater the force, greater is the acceleration. Also more the mass of the body, more is the force required to produce acceleration in it. Hence force is directly proportional to the mass and acceleration of the body.

Thus, mathematically forces defined as the product of mass and acceleration.

When a body falls under the force of gravity. Then, the force exerted on the earth is equal to the weight of that body i.e. \[W=m\times g.\]

Relationship between newton and dyne

It is possible to have motion in the absence of force and to have force in absence of motion.

Force can bring about the following effects:

Force can be classified as follows:

Now, let us discuss these forces one by one.

(a) Gravitational force - Force of attraction between any two masses is called gravitational force. For e.g.. All objects on Earth experience force of gravity due to earth. It is always attractive in nuture.

(b) Magnetic force - The force of attraction or repulsion between the poles of magnets is called magnetic force. Like poles repel each other and unlike poles attract each other.

Tides are caused by the rotation of earth and the gravitational effects of the Moon and Sun.

Balanced and unbalanced condition of forces

Example: Two students pushing a table in opposite directions, each applying an equal amount of force, form a pair of balanced forces. Similarly in a tug of war if two teams pull the rope with equal force, then the rope stays in same place.

When two or more forces acting on a body do not cancel the effect of each other, they are called unbalanced forces. Unbalanced forces always cause change in the state of rest or of motion.

Example: A ball hit by a bat, someone moving the furniture etc. are due to unbalanced forces.

Birds achieve thrust during flight by flapping their wings.

Camels have broad fest, so that area of contact is high and pressure is less and they are able to walk on sand without sinking in it.

A force which acts normally on a surface is called thrust.

If F is the force acting on area A, then

Thus smaller is the area on which the given force acts, the greater is the impact of force i.e. pressure and vice-versa.

(Remember: Force acting at an angle does not exert pressure on the surface)

The S.I. unit of pressure is Pascal (Pa). Pascal can be defined using the equation.

When a force of IN acts normally on a surface of area 1 m2, then the pressure acting on the surface is called 7 Pascal.

Example based on pressure - area relation

(1) The bags and suitcases are provided with broad handles so that less pressure is exerted on our hands or shoulders while carrying them because more the area, less will be the pressure.

(2) Railway lines are laid on large sized wooden or concrete tracks so that the normal force due to the weight of the train spreads over a greater area thereby reducing the pressure on the ground. This prevents the yielding of ground.

(4) Pins and nails are pointed at one end to have least area of contact with the surface. Due to this on pressing, the pins exert high pressure on the surface and hence easily penetrate the surface.

Water pressure 10,000m below the surface is equivalent to seven elephants standing on a dinner plate

All liquids and gases are regarded as fluids as they can flow.

A fluid has weight and hence on account of its weight, it exerts pressure on the walls of the container. "Moreover, unlike solids a fluid exerts pressure in all directions.

For instance if two holes are drilled in a bottle filled with water, it starts pouring out. This shows that water exerts pressure on the walls i.e., in all directions of the bottle or container.

(1) Pressure in fluids is directly proportional to its height or depth in the container. Thus pressure at various points but same height will be equal.

For e.g. If 3 holes in a bottle of water are drilled at the same level from its base water will come out of all the three holes with equal pressure.

Also pressure below the liquid surface goes on increasing with depth.

Applications of pressure in fluids

The sudden fall in atmospheric pressure produces the possibility of a storm.

The thrust due to the air column on a unit surface area of the earth is called atmospheric pressure.

Atmospheric pressure is measured by a barometer. A barometer using a liquidise known as liquid barometer. If a gas (air) is used, then it is known as aneroid barometer.

Two holes are made in a sealed oil cane. Through one hole the atmospheric pressure acts which forces the oil to come out from the other hole. 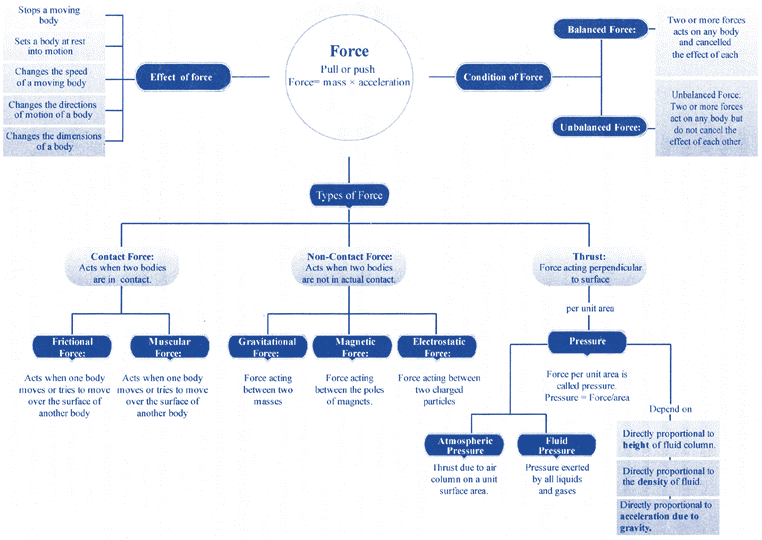