To learn about basic directions and cardinal directions.

To understand the rules for directional sense.

Direction sense test is a type of verbal reasoning in which student is required to have a good knowledge of direction. There are basically 4 directions namely North, East, West, and South. Four other combinations of them like North East (NE), South East (SE), South West (SW) and North West (NW) are cardinal directions. If a person is facing in East direction and he turns left by 45°, he will be facing North East (NE) direction. If he turns left by 90°, he would be facing North direction. 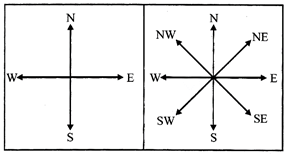 At the time of sunrise, if a man stands facing east, his shadow will be towards west.

At the time of sunset, the shadow of an object is always towards east.

At 12 : 00 noon, the rays of the sun are vertically downward; hence there will be no shadow.

his house is in North direction.

Deeksha goes 8 km to the East from her house, then she turns to her right and goes 6 km. What minimum distance will be covered by her to come back to her house.

One morning after sunrise Sangeeta, while going to school, met Poonam at Pacific Mall crossing. Poonam's shadow was exactly to the right of Sangeeta. If they were face to face, which direction was Sangeeta facing?

In the morning sun rises in the East. So in morning the shadow falls towards the west.

Now Poonam's shadow falls to the right of Sangeeta. So Sangeeta is facing South. 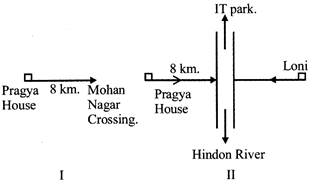 From (II) it is clear that the road which goes to IT-park is to the left of Pragya.