We all need food to live and grow. Animals cannot prepare their own food like plants. Hence they have a heterotrophic form of nutrition. The large and the diverse groups of animals living in this world have different food habits. It is for this difference that all the forms of life are surviving. Can you guess what will happen if all the animals eat the same type of food? Different animals eat different kind of food and their body parts are accordingly adapted. Adaptability and availability are the two main reasons for an animal to have a specific food habit. Based on the type of food that an animal eats, they have been divided into five major groups.

Plants i.e. herbs, bushes, leaves, grasses, fruits or seeds etc., of a plant are eaten by animals. These plant eating animals are called herbivores. Herbivores have adaptation to break, graze, chew and digest plant products. These animals have sharp front teeth which help to cut grass or leaves, and very strong flat grinding teeth at the back. These grinding teeth help to chew the grass.

Herbivore like cows continuously eat grass and store it in their stomach. The partially digested grass, called cud, is stored in stomach. Later the cud is returned to the mouth in small lumps and the animal chew it. This is the reason why a cow is continuously chewing even when they are not eating. The grass is rich in cellulose, a type of carbohydrate. Cellulose cannot be digested by all the animals. The special adaptation of the cow to digest cellulose is that they have a large sac between large intestine and small intestine. Cellulose is digested in this sac by the action of certain bacteria present there. Common examples of herbivores animals are cow, sheep, goat, zebra etc.

Carnivores are animals that eat the flesh of other animals. Latin worm 'carne' means flesh. Carnivores are solely dependent on animal's tissues (flesh) for their need of energy and nutrients. Lion, a carnivore has developed special characteristics which help them to adopt the life that they lead. Lions have sharp canines for hunting and tearing out the flesh of its prey. Eyes of lions are faced in front of the face, which allows it to have a correct idea about the location of the prey. They have sharp, pointed long claws in their front legs, this helps them to pounce and hold on to their prey. The light brown colours help it to hide in dry glass lands when it hunts. Lions have strong legs which help them to run very-very fast to catch their prey.

Snakes use the scales on their body to move fast on the ground. Snakes kill the prey by injecting venom (poison) into the body of the prey. Then they swallow their prey. Carnivores birds like eagle have sharp claws to catch their prey and strong pointed beak to tear the flesh. Eagles have very strong and good pair of eye. These help them to site their prey far from up in the sky.

Animals, which eat both plants and animals are called omnivores. Latin word 'omni' means everything. They are opportunistic, general feeders and not specially adopted to eat and digest either meat or plant material primarily. They eat what they can find easily. Human beings are best example. We eat fruits and vegetables when they are widely available and eat meat also. We neither have sharp claws nor sharp canines, because we don't go for hunting.

We neither have very broad flat grinding teeth like herbivores. Omnivores can switch over from plant to animals food depending on the availability of the kind of food.

They have the highest degree of survival in the toughest condition like scarcity of food. Herbivorous cannot survive if there is no plant, neither a carnivores without flesh. Omnivores can survive in the absence of any one kind of food. If plant is available they eat that and if meat is available they can live on it.

Scavengers are those animals, which eat the flesh of dead animals. Scavengers are carnivores. Their feeding behavior include the flesh of animals not killed by them. Scavengers play an important role in the environment by eating the dead remains of other animals. Thus they help to keep the surrounding clean.

The adaptation of scavengers is also like those of the carnivores. They have sharp teeth and claws. Birds like vultures have strong, sharp, pointed beak to tear the flesh. Some common example of scavengers is jackals, hyenas, burying beetles.

Some small animals depends on other animals for food and sometime even for shelter. They suck the blood of their host animals for their food and nutritional requirement. In returns they cause harm to the host body by making it diseased or sometimes even killing the host. Such animals are called parasites. Parasites do not have teeth, instead they have sucking tube in their mouth. Depending on the place where a parasite lives, it is grouped into 2 major groups, 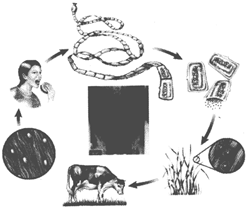 Which one of the following is a carnivorous animals?

Panther is a carnivorous animal.

(b) Leaves of plant