There are four main parts of a computer. They are: 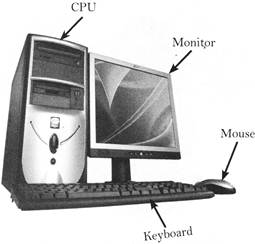 v  Mouse of a computer is a pointing device which looks like a real mouse.

v  It has .two click buttons and one scroll wheel.

v  The movement of the cursor on the screen depends on the direction of rolling the mouse on the mouse pad.

v  An arrow-like figure that appears .on the monitor is called a mouse pointer.

v  It is the main unit of a computer for processing data.

v   It is also known as brain of computer.

v  CPU controls all the activities of computer.

v  It has many keys including, 26 Alphabet keys, 9 numeric keys, 12 function keys, arrow keys, special keys, and so on.

v  It is used to type alphabets, numbers and symbols.

Some Additional parts of a computer

A printer is used for printing text and pictures from a computer on to paper.

A scanner scans or copies documents (text or pictures) and converts them into digital data.

Speakers help us to hear sound that comes from a computer.

1. Write the names of the images. 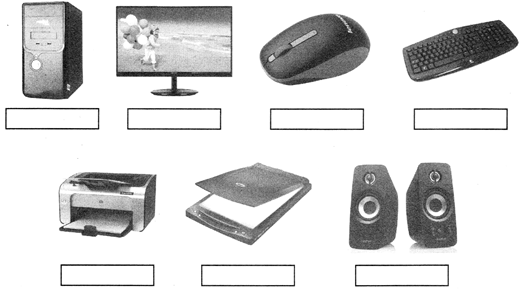 A.   It is used to type numbers, alphabets and symbols.

B.   It is known as the brain of a computer.

C.   It is used to display output.

D.   It is a pointing device used to select things.

E. In the picture of the keyboard below, colour the letters that are in your name.