Four major attempts made for classification of the elements are follows:

In 1829, J.W. Dobereiner, a German chemist made groups of three dements each and called them triads.

John Alexander Reina Newlands in 1863-64 noted that every eighth element showed similar physical and chemical properties, when the elements are placed in the increasing order of their atomic masses. This was called the Newlands law of octaves.

The law states that when elements are placed in the increasing order of atomic masses, the properties of the eighth elements are repeated.

On arranging the elements in the increasing order of atomic masses, it was observed that the elements with similar properties repeat periodically.

In 1869, Mendeleev stated his observation in the form of the following statement winch is known as the Mendeleev’s Periodic Law

The chemical and physical properties of elements are periodic function of their atomic masses.

Mendeleev arranged the elements in the form of a table which is known as the Mendeleev’s Periodic Table as below:

The following are the main features of this periodic table: 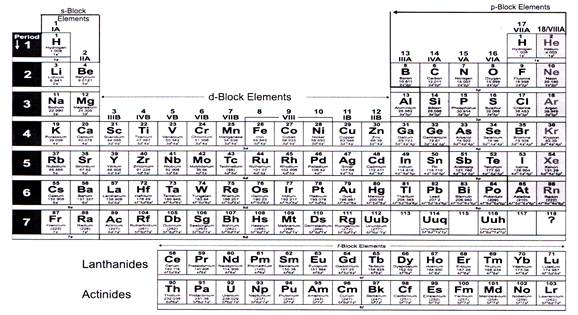 Modem Periodic table is divided into seven horizontal rows of elements. Each row of elements is called “PERIOD”. It has 18 vertical columns called groups. These groups are numbered 1 to 18 from the left, using Arabic numerals.

The electron arrangements of atoms are linked to position in the periodic table.

CLASSIFICATION OF THE ELEMENTS

The elements in the periodic table may be broadly classified as follows:

The elements present in groups 1 and 2 on left side and groups 13 to 17 on the right side of the periodic table are called representative or main group elements. Their outermost shells have less than eight electrons and hence are incomplete.

Group 18 on the extreme right side of the periodic table contains noble gases. Their outermost shells contain 8 electrons except. He which contains only 2 electrons.

Their main properties are:

Their important properties are as follows:

In all rare-earths (lanthanoids and actinoids), three outermost shells are incomplete. They are therefore called inner transition elements.

Metalloids are located along the staircase separating the metals from the non metals on the periodic table. Boron, silicon, germanium, arsenic, antimony, and tellurium all have metal and non metal properties.

Chemical Bond may be defined as a force that acts between two or more atoms to hold them together as a stable molecule.

A Lewis dot symbol consists of the symbol of an element and one, dot for each valence electron in an atom of the element. The Lewis dot structure of few elements are given below:

Noble gases namely helium, neon, argon, krypton, xenon and radon do not react with other elements to form compounds i.e. they are non-reactive.

It has been concluded that

This attainment of eight electrons for stable structure is called the octet rule. The octet rule explains the chemical bonding in many compounds.

The chemical bond formed by transfer of electron from a metal to a non- metal is known as ionic or electrovalent bond.

When sodium metal and chlorine gas are brought into contact, they react violently and we obtain sodium chloride. This reaction is shown below:

Ionic compounds contain ions (cations and anions) which are held together by the strong electrostatic forces of attraction. They show the following general characteristic properties:

The term “covalent bond” came into use in 1939 first given by Langmuir.

Polar Molecule: A molecule in which the bond dipoles present do not cancel each other out and this results in a molecular dipole,

Boron reacts with the halogens to form a class of compounds having the general formula 8X3, where X is a halogen atom.

These are examples of compounds having incomplete octets.

This type of bond is called a coordinate covalent bond (also referred to as dative bond), defined as a covalent bond in which one of the atoms donates both electrons.

An odd number of electrons

There are some molecules containing an odd number of electrons. For example, nitric oxide (NO) and nitrogen dioxide (\[N{{O}_{2}}\]). As we need an even number of electrons for complete pairing (to reach eight), the octet rule clearly cannot be satisfied for all the atoms in any of these molecules. Odd-electron molecules are sometimes called radicals.

More than eight electrons around the central atom

The structures formed by metals are held together by metallic bond.

Metals are good conductors of electricity and heat, because the free electrons carry a charge or heat energy through the metal. The free electrons allow metal atoms to slide over each other, so metals are malleable and ductile

Chemical changes result from chemical reactions taking place between different substances. It is a process in which a substance (or substances) is changed into one or more new substances.

This balanced chemical equation shows that “two hydrogen molecules can combine or react with one oxygen molecule to form two water molecules)”.

The types of Chemical Reaction are discussed below with examples.

In combination reactions, as the name indicates, two or more substances (elements or compounds) simply combine to form a new substance. For example, when a substance bums it combines with oxygen present in the air.

A decomposition reaction is the one in which a compound decomposes into two or more than two substances (elements or compounds). For example, lime stone when heated gives lime and carbon dioxide.

The displacement reaction is one in which one element displaces another element from its compounds.

Thus in this reaction, during the reaction process, one reactant gets oxidized while the other gets reduced. Such reactions are called oxidation reduction reaction or Redox Reactions.

As per modem concept, oxidation and reduction is explained in terms of loss and gain of electrons not in terms of gain and loss of oxygen and hydrogen.

By knowing how the oxidation number of an element changes during reaction, we can tell whether it is being oxidised or reduced.

Redox reactions are very important in our lives. Two very common phenomena- corrosion and rancidity are results of redox reactions. These are discussed below:

For most of us, Corrosion is the degradation of metals and is often called rust. Chemically we can define it as an irreversible interfacial reaction of a material (metal, ceramic, polymer) with 'is environment which results in consumption of the material. Most metals corrode on contact with water (and moisture in the air), acids, bases, salts, oils, aggressive metal polishes, and other solid and liquid chemicals. Metals will also corrode when exposed to gaseous materials like acid vapors, formaldehyde: gas, ammonia gas, and sulphur containing gases. Corrosion specifically refers to any process involving the deterioration or degradation of metal components. The best known case is that of the rusting of steel. Corrosion processes are usually electrochemical in nature.

Following factors influence the corrosion. These are the

What we perceive is an unpleasant change in the flavor and odour of a food, called rancidity. Unsaturated fats are more susceptible to oxidation than are saturated fats. Factors which accelerate fat oxidation include trace metals (iron, zinc, etc.), salt, light, water, bacteria, and moles. Fat oxidation can be retarded by use of antioxidants (Antioxidants are compounds that inhibit chemical reactions with oxygen such as BHT, BHA, vitamin E, and vitamin C), by use of spices such as sage and rosemary, and by use of light and/or air tight wrapping.

When chemical reactions take place they are often accompanied by heat changes.