The earth is the only planet with conducive environment to sustain life. It is continuously changing inside and outside. The earth is not same as it was millions of years ago or let us say thousands of years ago. We know that Indian plateau is sliding towards the north, Himalaya's height is increasing every year, earthquakes and volcanoes are changing the shape of landforms of the earth and all these processes are perpetuating from the time the earth came into existence. What are the reasons of such incidents and activities? To understand this, we have to understand the formation of earth from inside and outside. For this, let us understand the composition of earth. 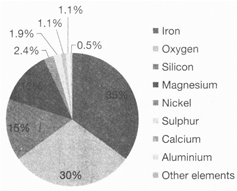 Some important facts about Earth

Earth was also formed almost at the same time when sun became a star; that is, 4.6 billion years ago. The sun is formed when nebula collapsed due to gravity. It started to spin faster and condensed into dust. Largely, all materials were gone into the centre and the sun was formed. The remaining particles that were available in the dust collided together to form various bodies and earth is one of them (refer Chapter 1, Solar System).

If we trace the history of the earth, we will know that it had been divided into four eras: Hadean, Archean, Proterozoic, and Phanerozoic. The first three are called Precambrian. Archaean is the time when the first life on the earth came into existence. The Phanerozoic can also be understood in three eras: Palaeozoic, Mesozoic, and Cenozoic.

It is important to understand that the earth is surrounded by air that gets thicker as we go away from the surface (approximately 160 km). However, the atmosphere is found at 600 km above from the earth. Troposphere is the lowest layer of atmosphere and is always in motion. Sunlight heats the body of the earth that causes rain (systematic process). The atmosphere is about 48 km above from troposphere. The current moving in the outer core of the earth generates magnetic field. This magnetic field is getting weak and it has been weakened 10% since 19th century.

seismic waves provide a lot of information to the geologists to study the internal activities. Till now the studies have provided the following information about the internal formation of the earth and have categorised it in three different layers: the crust, the mantle, and the core.

1.            Crust: It is the outermost layer of the earth. Its thickness varies on different surfaces o1 the earth. Similarly, according to the IUGG (International Union of Geodesy and Geophysics; beneath the ocean, its average thickness is about 5 km. However, under the continents, it is about 30 km; in the area of prime mountain ranges, it is 70-100 km thick. On the basis of the seismic waves, the crust further divided into two sub-divisions: the upper crust and the lower crust. In the upper crust, the speed of P wave is around 6.1 km/s, while in the lower crust, it is  6.9 km/s. The density of the upper crust is 2.8, while the density of the lower crust is 3.0 Further, the variation of density is the result of different pressures on these two sub-layers and this discontinuity of density is called 'Conrad discontinuity'.

2.         Mantle: The speed of seismic waves increases suddenly on the base of crust. In the lower crust, the wave P speed increases from 6.9 km/s to 7.9 km/s. In this way, there is a discon tinuity between the lower crust and the upper mantle. It was discovered by A. Mohorovick in 1909, and thus, it is called Moho discontinuity. From Moho discontinuity to the depth of 2,900 km, the mantle exists. Mantle is 83% of the earth volume and 68% of its mass. On the basis of the seismic waves, the IUGG has divided the mantle into three parts: from Moho dis continuity to 200 km depth, 200 km to 700 km depth, and from 700 km to 2,900 km depth The discontinuity of density of upper and lower mantle is called Repetti discontinuity.

The outer core ranges from 2,900 km to 5,150 km. The S Waves do not enter into thi: region; therefore, it is thought to be in liquid state with a density of 10.0, The Inner Con ranges from 5,150 km to 6,371 km, which is in solid or plastic state with a density of 13.6 There is a variation of density in outer and inner core and this continuity is called Lehmanr discontinuity. The volume of core is 16% of the total volume of the earth, but it is 32% of the total mass of the earth. The inner part of the core is formed from iron and nickel.

There is an imaginary line known as axis. Earth spins on it from North Pole to the South Pole. It also orbits the sun. The time it takes to complete a rotation on axis is 23.439 h, whereas it corn pletes one orbit of sun in 365.26 days. Axis on which the earth rotates around the sun is called ecliptic plane. Its implication is that the north and south blemishers keep changing its positior depending on the position of the earth towards the sun. 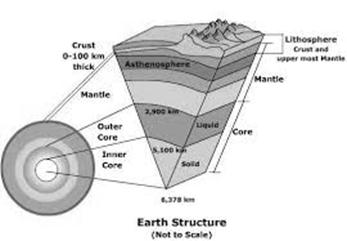 Figure 2.1 Interior of the earth

All the elements on the crust that are non-metallic whether soft like clay or solid like granite are called rocks. The rocks can be solid such as the sandstone or granite or soft such as clay or sand. They can be pervious such as chalk and limestone or impervious such as slate and granite. In general term, rocks are the collections of minerals. However, some rocks are formed by one mineral such as sandstone, limestone, and marble; others could be the mixture of different minerals such as granite, quartz, feldspars, and mica, which are the combinations of three or four minerals. On the crust of the earth, there are 110 elements from which only 8 are primarily constituents of the earth's crust.

On the basis of these formations, the rocks are divided into following three categories:

1.            Igneous rocks: During the volcanic eruption, the melted magma comes from the interior of the earth and spreads over the surface. When the magma cools and solidifies, it is changed into igneous rocks. After the origin of the earth, these were formed first, and therefore, these are also called primary rocks. These types of rocks cannot be penetrated, and therefore. these are less affected by the chemical reactions and remain for a very long time. They are affected by the physical and dynamic destructions and decomposition. It is a grained shape, solid-state rock. Fossils are not found in these rocks. The metamorphic and sedimentary rocks are directly and indirectly formed by these rocks. Some examples of these rocks are basalt and granite. The Deccan plateau is composed of basalt rocks. There are two types of igneous rocks: the intrusive rocks and extrusive rocks. If the erupted magma comes on the surface and cools down, it is called extrusive rocks, for example, basalt rocks. However, when the magma cools down deep inside the earth at a long time span, it is called intrusive rocks, for example, granite. Some of the examples of igneous rocks are Aravalli Range, Chota Nagpur Plateau, Plateau of Ranchi, and Caves of Ajanta. Most of the minerals such as silver, gold, iron, nickel, cordite, and plutonium are found in the igneous rocks.

3.  Metamorphic rocks: Due to high temperature and pressure or with the effect of both and with the reaction of high temperature vapour and water, the sedimentary and igneous rocks change into metamorphic rocks. These processes change the texture, mineral composition, quality, and colour of the igneous and sedimentary rocks (Refer Table 2.1). The metamorphic rocks are the harder and very solid than the other rocks. They lack the fossils: however, ample amount of diamonds, mica, and quartz are found in these rocks. 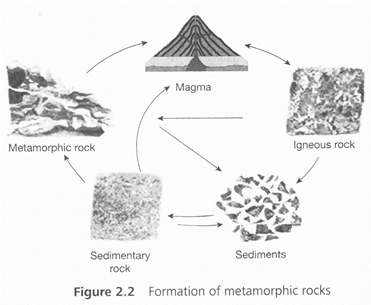 Table 2.1 Examples for the formation of metamorphic rocks 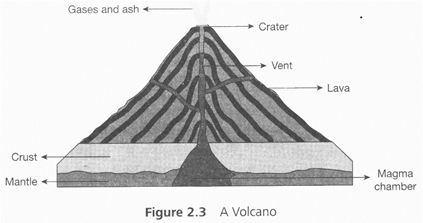 On the basis of eruption, volcanoes are classified as central eruption and fissure eruption, When the volcano erupts with an explosion from the central vent, it is called central eruption. These are located at the boundaries of destructive plateaus. Due to the internal activities in the crust, rocks are cracked; further, through these cracks, the lava comes from the earth that is called fissure eruption. Through the lava, which comes out of fissure eruption, the lava plateaus were created. There are four major volcanic areas in the world. The circum-Padfic belt, mid-continental belt, mid-Atlantic belt and interplant volcanism.

Some of the famous volcanoes in the world

Table 2.2 Some famous volcano of world

1.         Primary or Compression or P waves: These are high speed waves that can travel at a speed of 8-14 km/s. They differ in speed in different area of density. They are like sound waves that can run through gases, liquids, and solids.

2.         Transverse waves: These waves are like water or light waves. They are called transverse waves because the particles move at right angles to the rays. They are also called secondary waves because they appear after the primary waves. They have a less speed than the primary waves that is approximately 4-6 km/s. They cannot run through liquids, therefore, they become extinct in oceans.

3.         Surface or long waves: They have a speed of 3 km/s; they travel around the earth and they are called long waves. They are most dangerous waves because they travel both on land and water. The distribution of earthquakes is same as the volcanoes.