The things around us with which we fulfil our needs and which have utility values are called resources. All the resources used by mankind have the potential to produce energy which is useful for us. Resources are needed for the vital infrastructural facilities that are used extensively by all the sectors of human activities such as industries, agriculture, transportation, households, and service sectors. We need resources such as electricity, cooking gas, oils, and so on to meet our daily needs at our home. We cannot imagine cooking without energy that comes directly from resources such as fire, kerosene, cooking gas, or electricity. Similarly, in agriculture, we use human resources like man to work in the fields and animals to plough the fields. Now, in modern times, these animals are replaced by machines such as tractors, harvesters, and so on. However, what is reality here is that we need resources. Industries are also dependent on resources to produce various products used by us. The large machineries at factories need resources like electricity or oil to operate, and they also need human resources to keep the machines working. There is a long list where resources are needed and life is beyond imagination without the resources.

On the basis of availability, accessibility resources have been categorized as following:

The resources that are provided by the nature and used in their natural forms or with a slight human modification are called natural resources. The air we breathe and the water we use from rivers, lakes, etc., are some of the examples of natural resources.

The earth is full of resources, but all the resources could not be known or used at once. We need innovation, technology, and time to make those resources available for our use. On the basis of these features, the resources are classified as follows:

1.   Actual resources: The resources that are readily available and whose stock, distribution, and deposit are known to mankind are called actual resources.

1.   Renewable resources: The resources whose total stock and availability remain unaffected irrespective of their consumption are called renewable resources. As the word itself defines, renewable means which have the capacity to reproduce itself or which can be renewed.

Water, like oxygen, is necessary for human survival. Without it, we cannot imagine how the earth would be. Water covers almost 71 per cent of the total surface area of the earth. We can divide water sources into two categories: first is saline water and the other is fresh water. In total, only 3 per cent of fresh water is available on earth. India accounts for about 4 per cent of world's water resources. There are two major sources of fresh water: one is surface water and the other is replenishing groundwater.

1.   Surface water resources: We can include four major sources of water under surface water resources. These are rivers, lakes, ponds, and tanks. India is the land of rivers and we have about 10,360 rivers in our country. The annual flow of water in these rivers is about 1869 cubic km, but we cannot use all of it. Due to various reasons, we got only 690 cubic km of it.

2.   Groundwater resources: India has only 432 cubic km ground water. The Ganga and Brahmaputra basins have about 46 per cent of it. Groundwater utilization is very high in India.

As a resource,-land has multiple uses for human beings. It can be used as a residence and for production. As a resource, land incorporates different types of residential buildings, schools, roads, parks. We can easily categorise land resources based on its usage as follows:

4. Grazing lands: This type of land is usually owned by village Panchayat or government. These land properties are under common property resource.

5. Tree crops and groves area: In this category, we can include orchards and fruit trees. Most of these lands are private-owned properties.

6. Culturable waste land: It includes the lands that are not cultivated for more than five years.

7. Current fallow: It includes the lands that are left without cultivation for one agricultural year. It is a cultural practice to increase the fertility of a particular land in which that land is left uncultivated for a certain time period.

8. Net area sown: It is the physical extent of net sown land.

DISTRIBUTION OF MINERALS IN INDIA

Minerals have a characteristic of unequal distribution over the surface of earth. Some parts of earth are very rich in different types of valuable minerals, whereas some places do not have any. In India, there is unequal distribution of minerals. Most of the metallic minerals in India occur in the peninsular plateau region in the old crystalline rocks. Over 97 per cent of coal reserves occur in the valleys of Damodar, Sone, Mahanadi, and Godavari. Petroleum reserves are located in the sedimentary basins of Assam, Oujarat, and Mumbai high, i.e., off-shore region in the Arabian Sea. New reserves have been located in the Krishna-Godavari and Kaveri basins.

Most of the major minerals resources occur to the east of a line linking Mangalore and Kanpur. (NCERT textbook. Class 12, Geography, Chapter 7, Mineral and Energy Resources, pp. 73)

Mineral deposits are spread over three regions in India as given below: 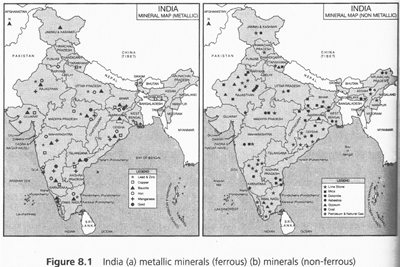 2.   The southwestern plateau: This plateau includes Karnataka, Goa, Kerala, and some parts of Tamil Nadu. This region is rich in bauxite and ferrous metals.

3.   The northwestern region: Aravali in Rajasthan and some parts of Gujarat are included in this region Copper and zinc, sand stone, marble, along with Gypsum and Salt in Gujrat.

Energy resources are primarily mineral fuels, which are essential for power generation. We all know that in every sector (agriculture, industry, transport, etc.), there is essential need of fuel that makes these sectors functional. In mineral fuels, we can include coal, petroleum, and natural gases. All these types of fuel minerals are originated from fossil fuels and are available in a very limited amount on earth. Nowadays, nuclear energy minerals are also considered in the category of energy resources. The trend of generating energy from nuclear energy minerals is developing very fast. It is considered as a source of future power generation. All these energy resources are called conventional sources of energy.

Coal is the main mineral used in the generation of thermal energy in India. There are almost seven types of coal found across the world. These are peat, lignite, sub-bituminous, bituminous, steam, anthracite, and graphite. Anthracite coal is considered as the best quality of coal due its highest carbon content. Bituminous coal comes the second and lignite is considered as the lowest grade. In India, bituminous coal has almost 80 per cent share in total coal production. It can be found in Gondwana Coal Field in India, which is located in Damodar basin. These fields are in Jharkhand Bengal coal belt. There are some vital coal fields in this area such as Bokaro, Giridih, Karanpura, and Jharia.

From the day internal combustion engines became an important part of our daily life, the demand of petroleum increased day by day. This source of energy is the back bone of automobiles, railways, and aircrafts. Usually we get it from under the earth's surface or from sea bed in natural form, that is, crude petroleum. It can be found in very old sedimentary rocks. In India, there are many places which are famous for producing petroleum such as Digboi (the first petroleum producing region of India), Naharkatiya, Ankleshwar, Kalol, Mehsana, Navagam, Mumbai high, etc. 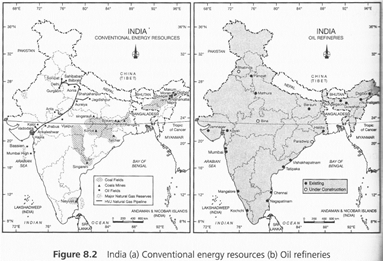 In today's world, nuclear energy is emerging very fast. It is a form of energy that is generated in nuclear power  plants. These power generating units use heat and steam to generate power. The energy that creates heat and steam are generated in a process of splitting of uranium atoms. This process is called nuclear fission. As a source of energy, nuclear energy consumes very little fuel to generate more power in comparison to coal and petroleum. In India, we have seven nuclear power plants atTarapur, Rawatbhata, Kudankulam, Kaiga, Kakrapar, Kalpakkam, and Narora.

Solar energy is a transformed energy that we get from sun. It is universal and inexhaustible source of energy. It is pollution free and available unlirpitedly. To get this energy from sun's heat, we should have solar panels. But

this technology is still very costly for a common man.

Wind energy is directly generated through wind by using windmills.

As we know that water covers almost 70 per cent of total earth's surface, in which seas contribute about 99 per cent. There is a tendency of rising and falling of sea water. It happens because of gravitational power of moon and sun. This rising and falling process is called tides. There is a lot to do in this area of generating energy through these tides.

Geothermal energy refers to the use of heat of earth's core to generate energy. Scientists of many countries are working on this source of energy.

Bioenergy is the energy produced from plant materials and animal excreta. Sometimes it is made from urban wastes also.