Air is an essential part of our life. We have to do many activities such as eat and drink to survive. Similarly, we breathe every second to live, and for it, air is very important. It is possible to survive few days without food, but not without breathing. To breathe, air is needed, and therefore, we need to understand atmosphere and climate in detail. Atmosphere is the mixture of gases. This mixture consists of life-giving gases such as oxygen (for humans and animals) and carbon dioxide (for plants). For exploring these gases and atmosphere, we have to understand the concept of Environment

We are surrounded by many objects such as living and non-living things, constructions, as well as natural components. These constitute the environment. Simply, we can say that environment is a combination of natural and man-made phenomenon. There are many components of environment and we can majorly categories them into three parts: natural, manmade, and humans, Natural environment is divided into four major parts:

The term atmosphere emerged from two Greek words atmos, which means vapour, and spharia (sphere). Atmosphere can be understood as a layer of gases surrounding our planet. The major | qases available in our atmosphere are nitrogen, oxygen, and carbon dioxide. Atmosphere functions as a shield and protects and saves us from ultraviolet rays, cosmic rays, and so on that are coming from the solar system. It is important to know that the available condition of our atmosphere was not always like this; rather, it took millions of years to reach this state.

Table 4.1 Gases and their volume percentage in atmosphere

It is important to know that the proportion of gases changes in the higher layer of the atmosphere. Further, carbon dioxide and water vapour can be found only up to 90 km from the earth's surface.

Carbon dioxide is a very important gas in atmosphere because it is transparent to the incoming solar radiation. It is also important for greenhouse effect. It is important to note that other gases other than carbon dioxide are constant but carbon dioxide has increased in the last few decades. Furthermore, increase in carbon dioxide will result in increase in temperature. The atmosphere has ozone layer located between 10 km and 50 km above the earth's surface, which filters ultraviolet rays coming from the sun.

Atmosphere also has water vapour that decreases as the altitude increases. It can be around 4% in the warm tropics and 1 % in cold areas and polar areas. It is important to know that water vapour decreases from equator towards the poles. It also absorbs parts of the insolation from the sun and preserves the earth from radiation heat. Therefore, it acts like a blanket, thereby allowing the earth neither to become too cold nor too hot. Water vapour also contributes to the stability and instability in the air (Fundamentals of Physical Geography, Class XI, NCERT, 2005, pp. 77).

Now, we are aware that our earth is surrounded by air and we inhale and exhale air for our survival. It is important to know that sun is the source of energy for earth. Whatever energy the earth receives from sun, it reflects back, and therefore, earth gets neither too hot nor too cold, but the heat received by different parts of the earth varies. The varied heat also influences the pressure in the atmosphere, and therefore, the temperature also gets varied.

The energy coming towards the earth is known as incoming solar radiation and also known as insolation. Only a very small amount of energy reaches the earth in actual sense. The earth receives 1.94 calories/cm²/min at the upper layer of its atmosphere.

The amount and the intensity of insolation vary during the day in a season and in a year. The factors that cause these variations in insolation are as follows:

Heat is created when insolation, atmosphere, and surface of the earth interact with each other. It is measured in temperature. There are various factors that influence the temperature on earth such as latitude of any place (latitude depends upon the insolation), altitude of a place, distance from the sea, mass of the air and ocean current, and so on.

There are various layers that constitute earth's atmosphere. All these layers are different from each other in various ways, that is, temperature, composition, pressure, and so on. The earth's atmosphere has five layers: troposphere, stratosphere, ozonosphere, ionosphere, and exosphere (Figure 4.1).

The lowest layer of the atmosphere is known as troposphere. All kinds of weather activities and actions happen in troposphere. The troposphere consists of aerosols and water vapour. The length of the sphere varies from various locations; for example, at tropics, its length is 20 km; at midlatitude, its length is 17 km, and at polar region, its length is 7 km. Tropopause is the layer that can be seen as border of troposphere, which distinguishes it from stratosphere. It is important to know that the temperature of tropopause does not change at various heights. 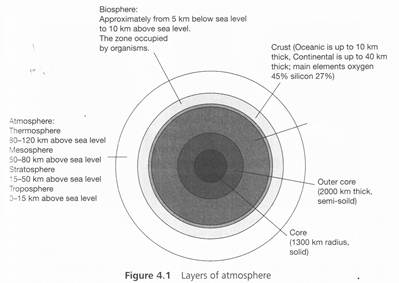 The second layer of earth's atmosphere is stratosphere. The location of this sphere is just above the troposphere. This sphere represents 20% of the total mass of atmosphere. We can find changes, differences, and variations in temperature in this sphere. The coldest layer will be near to the earth, whereas the warmer layer will be farther from earth. It is important to know that high temperature at higher altitude is caused by ultraviolet rays. There is variation in the border of this layer at various places: at equator, it is at 8 km, whereas it is 10-13 km to 50 km between the poles and the equator, and at poles, it is at 8 km. Temperature also varies as per the season,

The layer that is 32-60 km away from earth's surface is ozonosphere. It consists of a layer of ozone gas that absorbs the ultraviolet rays of sun and protects the earth from it. It is called as the safety shield of the earth. With increase in altitude, the temperature increases and 5°C increases within 1 km of altitude. It is important to note that refrigerators and air conditioners emit chlorofluorocarbon (CFC), which contains active chlorine. CFC depletes the ozone layer, allowing the UV rays to reach the earth. Hence, to protect the ozone layer, CFC-emitting refrigerators and air conditioners are banned.

This layer is located between 60 km and 1000 km, and therefore, it is known as upper atmospheric region of the atmosphere. It is composed of thermosphere, mesosphere, and exosphere. It also develops the inner side or edge of magnetosphere. It contributes in radio waves around the earth?.

It ranges from 640 km and above from the earth's surface. Its upper level is not determined. Hydrogen and helium are the gases found mainly in exosphere.

We have discussed earlier that unequal distribution of temperature prevails on earth. We also know that air expands when gets heated and compresses when gets cooled. This causes variations in the atmospheric pressure, and finally, air moves from high pressure to low pressure area.

We already know that air in its horizontal motion is called wind. Atmospheric pressure also determines the expansion and compression of air. The wind redistributes the heat and moisture across the planet, and thereby maintaining a constant temperature for the planet as a whole. The vertical rising of moist air cools it down to form clouds and brings precipitation. This chapter has been devoted to explain the causes of pressure differences, the forces that control the atmospheric circulation, the turbulent pattern of wind, the formation of air masses, the disturbed weather when air masses interact with each other, and the phenomenon of violent tropical storms (Fundamentals of Physical Geography, Class XI, NCERT, 2005, pp. 88).

The domain of earth that is related to water is called hydrosphere. It consists mainly of water bodies under and above the earth such as seas, oceans, lakes, rivers, glaciers, and ground water. In subsequent chapters, hydrosphere has been discussed in detail.

The solid part of the upper crust of the earth is called lithosphere. The major constructors of this crust are rocks, which are deposits of minerals. The upper hard and solid crust of earth is made  of light elements. The interior rocks of earth are made of heavy elements. The inner formation of earth can be understood by dividing it into three major parts, that is. crust, mantle, and core (Figure 4.2). In subsequent chapters, lithosphere has been discussed in detail. 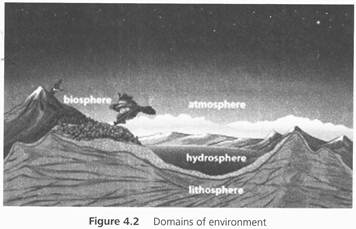 The part of earth that consists of living and non-living things is called biosphere. It can be considered as the sum of all ecosystems of a particular place. It is mainly the zone on earth that consists of life. It is the interaction of living and non-living beings with their environment and other parts of earth such as lithosphere, hydrosphere, and atmosphere.

Ecosystem can be defined as the relationship of living communities with that of non-living things and environmental components such as air, water, soils, and minerals that is regulated by a system. Both the abiotic and biotic components play important role in the functioning of ecosystem. These regulations and their nature can differ from one part of the world to other; for example, forests have a different nature of ecosystem, and the ocean has different kind of ecosystem called marine or aquatic ecosystem.

The main source of energy in any ecosystem is the sun. In oceans, the phytoplankton absorbs energy from the sun and process it through a series of chemical reactions and that energy is distributed accordingly to other organisms of the ocean. The trees and plants obtain energy from the sun and process it through photosynthesis and produce glucose that is eaten by other living beings. For example, deer eats the grass and deer is eaten by the tiger; thus, the energy of the sun flows through the grass to deer and from deer to the tiger. Therefore, the complex cycle of energy flow takes place in the ecosystem.

All the things that we see around us and the things that are made by humans comprise the man-made environment. There is a constant interaction of humans from their environment in which they live. Whatever we see around us today was not there before and what we see today may not be there tomorrow. Humans have this tendency to make their environment conducive and adaptable to their needs. In this process, the environment keeps changing. All the constructions that we observe around are the product of these interactions such as buildings, bridges, roads, poles, and so on. Humans need to settle themselves, and therefore, they made buildings and houses; they need to travel from one place to another, and for that, they need roads, railways, bridges, and so on. In subsequent chapters, this part would be discussed in detail.

Humans are emotional and social beings. They live in communities and societies. In their interactions, they adapt to some kind of regulations, and in due course, the institutions such as families, religions, and educational institutions were formed. These institutions and their activities are the integral part of human beings that are also the integral part of human environment. Human environment varies from place to place and from one society to another based on their rules, religions, and beliefs.