Mirrors and Reflection of Light 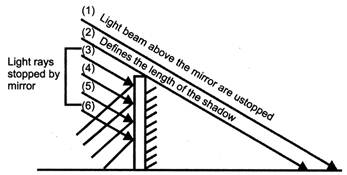 IMAGE FORMED BY A PLANE MIRROR

The image formed of an object by a plane mirror is "virtual". It means that we cannot obtain the image formed in a mirror on a screen placed anywhere behind the mirror. An image which can be obtained on a screen is called "real image".

Notes - Mirrors and Reflection of Light