Temperature is defined as the degree of hotness or coldness of a body. Hot and cold are relative terms. According to kinetic theory of gases, temperature is a measure of average translational kinetic energy of a molecule i.e.,\[{{T}_{K}}\propto \](K.E) molecules.

A branch of science which deals with the measurement of temperature of a substance is called thermometry. Thermometer is a device used to measure the temperature. Thermometer used for measuring very high temperatures are called pyrometer.

Relationship Between Different Scales of Temperature:

where, n = number of moles in the sample of gas

It is the combination of following three laws

(i) Boyle's law: When temperature is held constant, the pressure is inversely proportional to volume.

(ii) Charle's law: When the pressure is held constant, the volume of the gas is directly porportional to the absolute temperature.

(iii) Avogadro's law: When the pressure and temperature are kept constant, the volume is directly proportional to the number of moles of the ideal gas in the container.

Coefficient of volume expansion is defined as the fractional increase in volume per \[{}^\circ C\] rise in temperature.

Applications of Thermal Expansion in Solids

(i) Bimetallic strip: If two strips of different metals are welded Together to form a bimetallic strip, when heated uniformly it bends in the form of an arc, the metal with greater coefficient of linear expansion lies on convex side.

The radius of arc thus formed by bimetal is,

where \[\Delta t\]= temp. difference between the two ends.

d = thickness of each strip

where\[{{\gamma }_{g}}\]is coefficient of cubical expansion of glass (material) of the containe.

Change in Density with Temperature

Now, if the temperature is increased by\[t{}^\circ C\], mass will remain unchanged but due to thermal expansion volume increases so that, \[V'=V\,\,(1+\gamma \Delta t)\]

Here \[\gamma \]is coefficient of cubical expansion of the substance at\[0{}^\circ C\],

Heat is a form of energy which causes sensation of hotness or coldness. It is transferred between two or more systems or a system and its surroundings by virtue of temperature difference. The flow of heat is always from higher temperature to lower temperature.

No heat flows from one body to other, when both the bodies are at the same temperature. The two bodies are said to be in thermal equilibrium.

Specific heat capacity: It is the amount of heat energy needed to raise the temperature of unit mass of substance by \[1{}^\circ C\](or 1K).

It is denoted by s or c.

If the temperature of a substance of mass m changes from T to T + dT when it exchanges an amount of heat dQ with its surroundings, then its specific heat capacity is given by

For example, the specific heat capacity of water is:

The water equivalent of a body is the amount of water that absorbs or gives out the same amount of heat as is done by the body when heated or cooled through\[1{}^\circ C\].

Its SI unit is Kg and CGS unit g.

Principle of Calorimetry or Law of Mixture

According to the principle of calorimetry, Heat lost = heat gained

Heat lost or gained by a body is given by,

When state of a substance changes, change of state takes place at constant temperature (m.pt. or b.pt.) heat is released or absorbed and is given by,

The SI unit of latent heat is J/kg

Some common changes of states:

(i) Melting: When heat is supplied, solid substance changes into liquid, this change of state of substance is called melting.

The temperature at which the solid and the liquid states of a substance coexist in thermal equilibrium with each other is called its melting point.

(ii) Freezing: When heat is released, liquid changes into solid, this change of state of substance is called freezing.

(iii) Condensation: When vapour is cooled, it changes into liquid, this change of state is called condensation

(iv) Evaporation: Conversion of liquid into gaseous state at all the temperatures is called evaporation or boiling.

The temperature at which the liquid and vapour states of a substance coexsist in thermal equilibrium with each other is called its boiling point.

(v) Sublimation: It is the conversion of a solid directly into vapours.

Sublimation takes place when boiling point is less than the melting point.

If to a given mass (m) of a solid, heat is supplied at constant rate and a graph is plotted between temperature and time, the graph is as shown in fig. and is called heating curve. From this curve it is clear that: 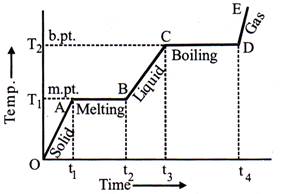 Conduction is that mode of transmission of heat in which heat is transferred from a region of higher temperature to a region of lower temperature by the aid of particles of the body without their actual migration. Conduction requires material medium.

When one end of a rod is heated, then initially the temperature of various points of the rod changes continuously and the rod is said to exist in a variable state. After some time, a state is reached,   when   the 6m temperature of each cross-section becomes steady. this state is known as steady state.

If rod is in contact with atmosphere or surroundings and it is heated at one end then distance versus temperature curve is as shown in fig. alongside. 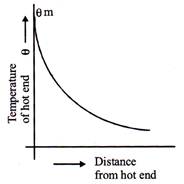 If the temperature of the isothermal surfaces be \[\theta \] and\[\theta -\Delta \theta \] and perpendicular distance between them is\[\Delta x\] then,

Temperature gradient between them

The negative sign show that temperature \[\theta \] decreases as the distance x increases in the direction of heat flow.

It has been found experimentally that in steady state, heat current will be

(a) proportional to the area of the cross-section A of the rod.

Thus we find that

where K. is a constant of proportionality called the thermal conductivity of the substance.

Coefficient of thermal conductivity (K): The coefficient of thermal conductivity, K, of a material is defined as the amount of heat that flowing per second through a rod of that material having unit length and unit area of cross-section in the steady state, when the difference of temperature between two ends of the rod is \[1{}^\circ C\]and flow of heat is perpendicular to the end faces of the rod.

For a perfect conductor thermal conductivity K is infinite and for a perfect insulator K is zero.

Thermal Resistance: The thermal resistance of a body is a. measure of its obstruction to the flow of heat through it. It is defined as the ratio of temperature difference to the heat current (= rate of flow of heat)

If we have more than two slabs in the compound slab.

The total thermal resistance of the slabs connected in series

For more than two slabs, we have

Convection like conduction requires a material medium. It is the process in which heat is transferred from one place to other by actual movement of' heated material particles It is possible only in fluids. The type of convection which results from difference in densities is called natural convection. For example, a fluid in a container heated through its bottom. However, if a heated fluid is forced to move by a blower, fan or pump, the process is called forced convection. The rate of heat convection from an object is proportional to the temperature difference (A9) between the object and convective fluid and the area of contact A,

where, h represents a constant of proportionality called convection coefficient and depends on the properties of fluid such as density, viscosity, specific heat and thermal conductivity.

When a body is heated and placed in vacuum, it loses heat even when there is no medium surrounding it. The process by which heat is lost in this case is called radiation. This does not require the presence of any material medium,

Radiation has the following properties:

(a) Radiant energy travels in straight line and when some object is placed in the path, it's shadow is formed at the detector.

(b) It is reflected and refracted or can be made to interfere. The reflection or refraction are exactly as in case of light.

(c) It can travel through vacuum.

(d) Intensity of radiation follows the law of inverse square.

(e) Thermal radiation can be polarised in the same way as light by transmission through a nicol prims.

Emissive power (e): For a given surface it is defined as the radiant energy emitted per sec per unit area of the surface.

Emissive power of a surface depends on its nature and temperature. It is maximum for a perfectly black body and minimum for a smooth shining body.

For a perfectly black body, absorptive power is maximum and unity. It has no unit and dimensions.

Absolute emissivity: The emissivity e of a surface is defined as the quantity of heat radiated per second by one unit area of its surface when its temperature is 1°C above the surroundings.

A black body is defined as one that will completely absorb all the radiations of whatever wavelength which falls on it.

(i)  A perfectly black body absorbs all the radiant heat incident upon it. (i. e. a= 1)

(iii) The coefficient of emission of a perfectly black body is 1. It is very good emitter of heat.

(iv) A perfectly black body does not exist in nature.

For practical purposes lamp black is treated as a perfectly black body as its coefficient of absorption is nearly 0.98.

Here, constant b is known as Wien's constant

The energy (\[{{E}_{\max }}\]) emitted corresponding to the wavelength of maximum emission\[({{\lambda }_{m}})\] increases with the fifth power of the absolute temperature of the black body.

It is known as Wien's fifth power taw.

substituting these values above, we get T, the surface

Temperature of the Sun. It comes out to be equal to 5791 K. In this the surface temperature of Sun has been estimated.

Also, absorptive power of a body is equal to its emissivity.

According to Stefan Boltzmann law, the quantity of heat energy radiated in one second per unit area of a perfectly black body is directly proportional to the fourth power of its absolute temperature.

where \[\sigma \] is a universal constant known as Stefan-Boltzmann

Cooling of a body by radiation

The rate of loss of heat of the perfectly black body

Let, the emissivity of an ordinary body =\[\varepsilon \]

The rate of loss of heat of the ordinary body

The rate of cooling of a body (rate of loss of heat) is directly proportional to the excess of temperature of the body over the surroundings, provided that this excess is small and loses of heat by radiation only.

If\[\theta \]and\[{{\theta }_{0}}\]are the temperatures of the body and its surroundings respectively, then according to Newton's law of cooling,

The negative sign indicates that the amount of heat is decreasing with time.

where k is the constant of proportionality.

Rate of fall of temperature

Thus, Newton's law of cooling can also be stated as,