Higher organism like plants cannot perform anaerobic respiration for long. It is toxic because accumulation of end products, insufficient amount of available energy and causes stoppage of many active process.

(i) Formation of ethyl alcohol :  When oxygen is not available, yeast and some other microbes convert pyruvic acid into ethyl alcohol. This is two step

process as explained below 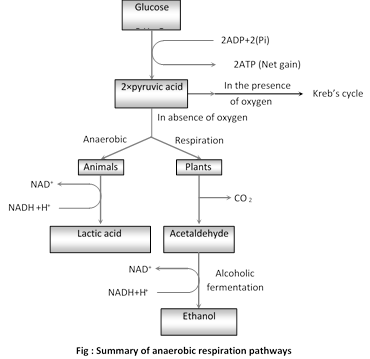 (a) In the first step pyruvic acid is decarboxylated to yield acetaldehyde and \[C{{O}_{2}}\]. In the presence of Mg++ and TPP (Thiamine pyrophosphate) pyruvate carboxylase.

(b) In the second step acetaldehyde is reduced to ethyl alcohol by NADH2 formed in the glycolysis.

(ii) Production of lactic acid : In this process hydrogen atoms removed from the glucose molecule during glycolysis are added to pyruvic acid molecule and thus lactic acid is formed.

(2) Pasteur effect : Two types of respiration -anaerobic and aerobic respiration produce carbon dioxide in the ratio of 1:3 as shown in the equation.

Pasteur noted that when oxygen is given to the running anaerobic respiration the output of CO2 is not similar to aerobic respiration, i.e. during aerobic respiration the ratio 1:3 does not always appear to be true. In several cases the amount of carbon dioxide is much less in comparison to normal aerobic respiration as shown above. For such cases it is considered that the presence of oxygen may sometimes lower down the rate of breakdown of sugar. The phenomenon is named as 'Pasteur's effects' after the name of great scientist and the process may be defined as "the inhibition of sugar breakdown due to the presence of oxygen under aerobic condition" and the reaction is called Pasteur reaction. Dixon (1937) stated that the Pasteur effect is the action of oxygen is checking the high rate of loss of carbohydrate and in suppressing or diminishing the accumulation of products of fermentation."

Pasteur's effect is said to occur due to many reasons. Some of them are :

(i) Pasteur reaction inhibits some glycolytic enzyme and stops glycolysis.

(ii) Formation of excess of CO2 from degradation of compounds other than respiratory substrate.

(3) Connection between aerobic and anaerobic respiration 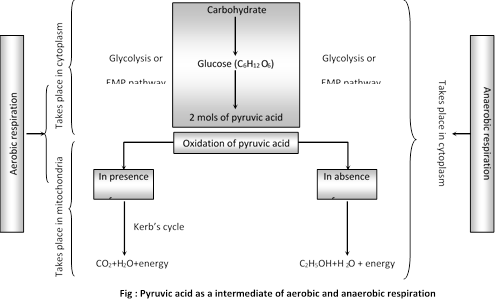 The glycolysis is the common phase and its products pyruvic acid is the common intermediate of the aerobic and anaerobic respiration.

Gay Lussac was the first to provide following reaction for the fermentation of sugar.

The fermentation is of two types : Homofermentive (one product) and heterofermentive (two or more than two types of products). Alcoholic fermentation may occur in almost, any moist sugar containing medium or sugar solution, such as fruit juice, which is inoculated with yeast or which is left exposed to air. The examples of fermentation:

(i) Butyric acid fermentation : It occurs in butter which has turned rancid. Bacteria like Clostridium butyricus and Bacillus butyricus are responsible for fermenting sugars and lactic acid into butyric acid to the following equation :

(ii) Lactic acid fermentation : In this process the lactose sugar, present in the milk, is converted into lactic acid which provides a distinctive sour taste to the milk. Two bacteria viz., Bacterium lactic acidi and B.acidi lactici  take part in this process.

(iv) Importance of fermentation : Anaerobic respiration is advantageous in many ways :

(a) It supplement, the energy provided by aerobic respiration during intense muscular activity.

(b) Brewing industry produces beers and wines by fermentation of sugary solution with yeast (saccharomyces cerevisiae).

(e) Tea and tobacco leaves are cured (freed of bitterness and imparted pleasant flavours) by fermentation with certain bacteria.

(f) Vinegar is produced by fermenting molasses with yeast to ethyl alcohol which is then oxidised to acetic acid with aerobic acetic acid bacteria (Acetobacter aceti).

(g) Bacterial fermentation is also used for tanning hides (removal of fat, hair and other tissues).

(h) Retting of hemp fibers is achieved by fermentation with Pseudomonas fluroscense.

(i) Ensilase, a nutritive fodder for cattle, is prepared by fermentation with bacteria in air-tight-chambers called silos.

However the actual amount of energy available from each ATP (rest of energy is lost as heat, and so on) is approximately 7,3000 calories (7.28 Kcal) or-34 kJ.

Therefore, actual energy yield from one mole of glucose is :

(iii) Efficiency of alcoholic fermentation : By Yeast only two molecules of ATP are generated per glucose molecule and efficiency will be, therefore,

(6) Difference between respiration and fermentation

(1) Fat respiration :  Fats are stored as triglycerides in cells, (in animal-adipose tissues and in plants-seeds). They break up into fatty acids and glycerol in the cytoplasm before use in respiration. Glycerol converted into Dihydroxy acetonephosphate and enters into glycolysis. The conversion of fatty acid into carbohydrate is called \[\beta \]oxidation.   It convert in acetate units of acetyl CoA to glyoxylate and malate (malic acid) takes place in microbodies, termed glyoxysomes. The glyoxysomes are contain all the necessary enzymes for \[\beta \]oxidation of fatty acid to acetyl CoA and subsequent conversion of the acetate units to malic acid (malate) and succinic acid (succinate), the cycle is known as Glyoxylate cycle.

(a) Discovery : Kornberg and Krebs discovered first this cycle in the bacterium Pseudomonas. Later, the reaction of \[\beta \]-oxidation of fatty acids and its conversion of acetyl CoA to glyoxylate and malate occurs in glyoxysomes given by Beevers.

(b) Occurrence : It occurs in seed rich in fats convert stored fats to carbohydrates during germination. The cycle does not appears to be present in those seeds that store starch rather than fat. Glyoxylate activity in germination seeds ceases as soon as the fat reserves have been used up. The fact that plants convert fatty acid to carbohydrates is due to operation of two unique glyoxysome enzyme not known to be present in animals : isocitrate lyase and malate synthetase. 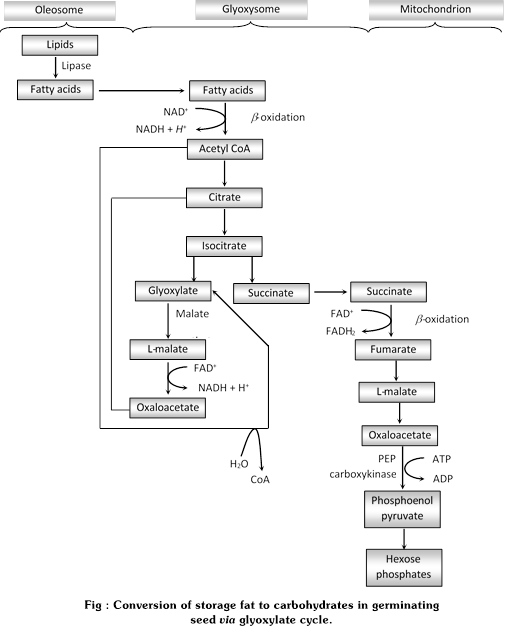 (c) Description : The cycle starts with fatty acids are derived from lipase-mediated enzymolysis of triglycerides occurring in lipid bodies called oleosomes. The fatty acids undergo\[\beta \]oxidation in the glyoxysome with the formation of acetyl CoA.

The acetyl CoA reacts with oxaloacetate to form citrate and then isocitrate. The isocitrate is cleaved to succinate and glycoxylate. This reaction is catalyzed by isocitrate lyase. The glyoxylate combines with acetyl CoA to form malate, the reaction being catalyzed by malate synthetase. The malate in the glyoxysome is oxidized to oxaloacetate, which initiates the cycle again by combining with acetyl CoA derived from \[\beta \]oxidation of fatty acids. The succinate produced moves out of the glyoxysome and into the mitochondrion, where it is converted through the conventional Krebs cycle reactions to oxaloacetate.

The increase of oxaloacetate (OAA) provides ample substrate for amino acid production and carbohydrate formation by reverse glycolysis. Conversion of OAA to phosphoenolpyruvic acid and other glycolytic intermediates takes place in the cytoplasm.

(2) Protein respiration : The proteins split into amino acids in the cytoplasm for use in respiration. The amino acids enter respiratory routes in two ways : Deamination and Transamination.

(ii)  Transamination : In transamination, an amino group of an amino acid is transferred to an appropriate keto acid, forming a new amino acid and a new keto acid. The keto acids so formed are normal participants of glycolysis or Krebs cycle. Of the all amino acids of plant cell only glutamic acid is believed to be oxidised directly by the enzyme, glutamic acid dehydrogenase into a-ketoglutaric acid and ammonia in the presence of NAD. a-ketoglutaric acid enters the Kreb's cycle  to undergo cyclic degration and oxidation. 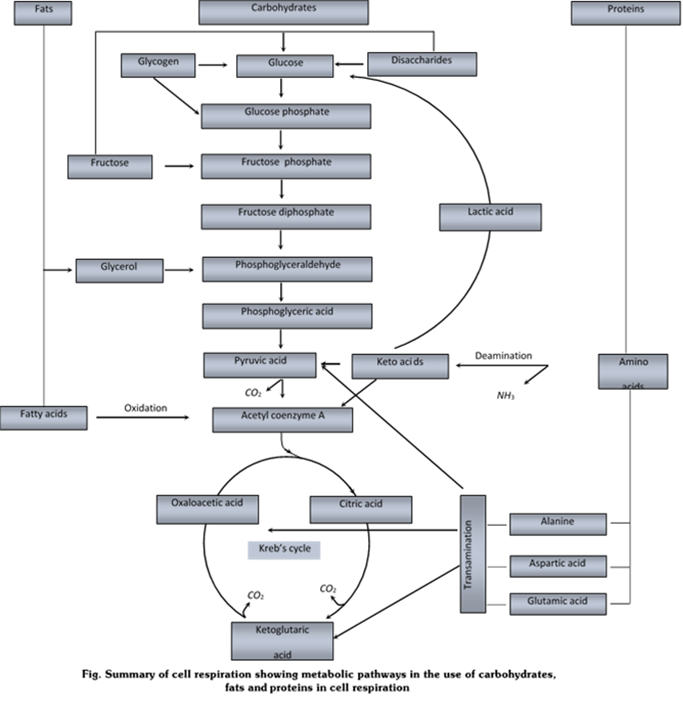 Introduction and Types of Respiration keyboard_arrow_right