Introduction: "When genes are closely present link together in a group and transmitted as a single unit, the is phenomenon is called linkage".

(i) Sutton's hypothesis of linkage (1903): The number of groups of genes are equivalent to the number of chromosomes.

(ii) Morgan's hypothesis of linkage (1910): It was given by T. H. Morgan. According to him the genes of homologous parents enter in the same gamete and tend to remain together, which is opposite in heterozygous parents. Linked group are located on the same chromosome and distance between linked group of gene limits the grade of linkage.

(iii) Coupling and repulsion hypothesis: Proposed by Bateson and Punnet (1906) that dominant alleles tend to remain together as well with recessive alleles, called gametic coupling. If dominant and recessive alleles are present in different parents they tend to remain separate and called repulsion. When BBLL and bbll are crossed, the \[{{F}_{1}}\] is BbLl and the test cross of it will show progeny in 7 : 1 : 1 : 7 ratio i.e. BbLl : Bbll : bbLl : bbll (coupling) when BBll is crossed with bbLL the \[{{F}_{1}}\] is BbLl or the test cross progeny will show 1 : 7 : 7 : 1 ratio i.e., BbLl : Bbll : bbLl : bbll (repulsion). Coupled and repulsed genes are known as linked genes. Linkage has coupling phase and repulsion phase. In coupling phase both the linked genes have their dominant alleles in one chromosome and recessive alleles in other chromosomes. The heterozygotes with such constitution is called cis heterozygote. Cis-arrangement is a original arrangement. Which form two types of gametes as (AB) and (ab). In Human X–chromosomes carry 102 genes and Y

In repulsion phase the normal alleles as well as mutant alleles lie in opposite chromosomes of the homologous pair, such heterozygote is called as trans heterozygote. It is not original arrangement, caused due to crossing over, which form two types of gametes as (Ab) and (aB).

(iv) Chromosomal hypothesis of linkage: It was given by Morgan and Castle. According to them linked genes are bound by chromosomal material and are transmitted as a whole.

(2) Types of linkage: Depending upon the absence or presence of nonparental or new combination of linked genes, linkage has been found to be complete or incomplete.

(ii) Incomplete linkage: In majority of cases, the homologous chromosomes undergo breakage and reunion during gametogenesis. During reunion the broken pieces of the chromatids are exchanged, producing some nonparental or new combinations. Therefore, the linkage is rendered incomplete. The phenomenon of interchange of chromosome segments between two homologous chromosomes is called crossing over. Incomplete linkage is very common and has been studied in almost all the organisms.

(3) Linkage groups: All the genes which are linked with one another, form a linkage group. Since linked genes are present in the same chromosome, the number of linkage group in an animal or plant is equal to the haploid number of chromosomes present in its cells. This hypothesis was given by Sutton and was proved by experiments on Drosophila by T.H. Morgan.

(5) Factor affected to linkage: Linkage is affected by the following factors.

(ii) Age: With increasing age the strength of linkage decreases.

(i) Due to linkage new recombinants are formed.

(ii) It helps in maintaining the valuable traits of a newly developed variety.

(iv) It disallows the breeders to combine all the desirable traits in a single variety.

Introduction: The process by which exchange of chromosomal segment take place is called crossing over. Crossing over may be defined as "the recombination of linked genes" brought about as a result of interchange of corresponding parts between the chromatid of a homologous pair of chromosomes, so as to produce new combination of old genes. The term was given by Morgan and Cattle. Janssen (1909) observed chiasmata during meiosis-I (Prophase). Morgan proposed that chiasmata lead to crossing over by breakage and reunion of homologous chromosomes. Crossing over results in new combination while non-cross over result in parental type, which leads to variations.

(1) Kinds of crossing over

(ii) Germinal crossing over: It is found in germinal cells during gametogenesis. This is also known as meiotic crossing over.

(iii) Single cross over: It takes place at one point only on the non-sister chromatids, only 2 chromatids are involved.

(iv) Double cross over: It is the formation of 2 chiasmata in the same chromosome independent of each other. In a double cross over the genes lying outside the crossed regions will retain their original association.

(v) Multiple cross over: It  is formed when more than 2 chiasmata are formed. It is very rare.

(vi) Two-stranded crossing over: It takes place before splitting of homologous chromosomes so all the four resultants are recombinants.

(vii) Four stranded crossing over: It takes place after splitting of homologous chromosomes only 2 non-sister chromatids take part in crossing over resulting in 2 parental and 2 recombinant types.

(i) Chiasma type theory: According to Janssen, 1909 the act of crossing over is followed by chiasma formation. He suggests that the crossing over takes place at the pachytene stage and the chiasma appear at diplotene.

(ii) Classical theory: According to Sharp, 1934, crossing over is the result of chiasma formation. According to this view, the chiasma are organised at pachytene and crossing over takes place at diplotene stage. On the basis of evidence available from molecular biology, that is untenable and hence rejected.

(ii) Precocity hypothesis: According to Darlington, the pairing of homologues occurs to avoid singleness of a chromosome. The pairing need of a chromosome could be nothing less than the replication of DNA. The crossing over takes place due to torsion on chromosome created by coiling of the two homologues around each other.

In fact, the crossing over is the event which, precisely at molecular level, results in the formation of a hybrid DNA molecule. Such models have been proposed by White house, 1963 as also by Holliday, 1964. These models mainly elaborate the mechanism of breakage and reunion of DNA helicase.

(5) Coincidence: Coincidence or coefficient of coincidence is inverse measure of interface and is expressed as the ratio between the actual number of double cross over and the expected number of such double cross. That is:

(i) Temperature: High and low temperature increase the frequency of crossing over.

(ii) X-ray: Muller has discovered that exposure to X-ray and other radiations increases the frequency of crossing over.

(iii) Age: The frequency of crossing over decreases with increasing age in female Drosophila.

(v) Sex: Crossing over in Drosophila males is negligible. Males of mammals also exhibit little crossing over. In silk-moth, crossing over does not occur in females. 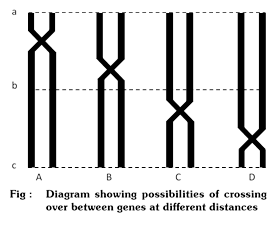 (ix) Cytoplasm: Factor for crossing over is present in cytoplasm and is inherited to the offspring.

(x) Nutritional effect: Crossing over frequencies are affected by concentration of metallic ions, such as calcium and magnesium.

(xi) Genotypic effect: Crossing over frequencies between the same two loci in different strains of the same species show variation because of numerous gene differences.

(xii) Chromosome structure effect: Changes in the order of genes on a chromosome produced by chromosomal aberrations usually act as cross over suppressors.

(xiv) Interference: If there are two doubles crossovers, then one crossover tries to influence the other by suppressing it. This phenomenon is called as interference. Due to this phenomenon, the frequency of crossing over is always lower than the expected.

(7) Significance of crossing over: This phenomenon is of great biological significance, which are as under:

(i) It gives evidence that the genes are linearly arranged on a chromosome. Thus, it throws light on the nature and working of the genes.

(ii) It provides an operational definition to a gene. It is deemed as the smallest heritable segment of a chromosome in the interior of which no crossing over takes place.

(iv) It is the main cause of genetic variations. It's occurrence during the act of meiosis produces variations in the heritable characters of the gametes.

(v) This phenomenon has also found it's utility in breeding and evolving new varieties. The linkage of undesirable characters can be broken by temperature treatment, using X-ray or chemicals. Thus, new recombinants can be prepared.

Notes - Linkage and Crossing Over