(i) Mode of origin: Genes having only two distinct alleles. If mutation occurs in the same gene but in different directions in different individuals, the population as a whole will have many different alleles of that gene. Each allele may produce a different phenotype, and various combinations of alleles produce several genotypes and phenotypes in the population.

(a) There are more than two alleles of the same genes.

(b) All multiple alleles occupy the corresponding loci in the homologous chromosomes.

(c) A chromosome or a gamete has only one allele of the group.

(d) Any one individual contains only two of the different alleles of a gene, one on each chromosome of the homologous pair carrying that gene.

(f) Different alleles may show codominance, dominance-recessive behaviour or incomplete dominance among themselves.

(g) Multiple alleles confirm to the Mendelian pattern of inheritance.

(iii) Definition: More than two alternative forms (alleles) of a gene in a population occupying the same locus on a chromosome or its homologue are known as multiple alleles.

(iv) Examples of multiple allelism : A well known example of a trait determined by multiple alleles is the blood groups in man and skin colour.

(a) Blood proteins : According to Karl landsteiner (1900) a Nobel prize winner, blood contains two types of proteinous substances due to which agglutinations occurs.

(1) Agglutinogen or antigen : It is a protein found on the cell membrane of RBC’s.

(2) Agglutinin or antibody : This the other proteinous substance, found in the plasma of the blood.

Whenever the blood of a person receives the foreign proteins (antigen) his blood plasma starts forming the antibodies in order to neutralize the foreign antigens.

(b) Agglutinations : Two types of antigens are found on the surface of red blood corpuscles of man, antigen A and B. To react against these antigens two types of antibodies are found in the blood plasma which are accordingly known as antibody – anti-A or a and anti-B or b. Agglutination takes place only when antigen A and antibody a occur together or antigen B and antibody b are present in the blood. Under such condition antibody a reacts with antigen A and makes it highly sticky. Similarly antigen B in presence of antibody b become highly sticky with the result RBC’s containing these antigens clump to form a bunch causing blockage of the capillaries. Agglutination in blood is therefore antigen-antibody reaction.

Blood groups of man with antigen and antibodies

(2) M, N blood group: K. Landsteiner and A.S. Wiener discovered that antigen M,N or both MN are also found on the surface of red blood corpuscles of human beings. No antibodies are however formed in the blood plasma for these antigens. If however, these antigens are injected into rabbit’s blood, they produced such antibodies which are not found in human beings. Inheritance of such kind of blood groups is also brought about like that of A, B and AB.

(e) Blood bank : A place where blood of different blood groups is safely stored in bottles for emergency use, is called blood bank. Blood after proper testing is stored in a sealed bottle at a definite temperature (4°-6°c) to be preserved for a definite time period.

Artificial anticoagulants are used to prevent blood clotting in the blood banks. These anticoagulants are added to the blood preserved in bottle. Such anticoagulants include sodium citrate, double oxalates (sodium and ammonium), dicumarol and EDTA (ethylene diamine tetra acetic acid). The whole blood in this way can be stored for a maximum period of 21 days.

(f) Inheritance of blood groups : Blood groups in human are inheritable trait and are inherited from parents to offsprings on the basis of Mendel’s Laws. Blood group inheritance depends on genes received from parents. Genes controlling blood group in man are three instead of two and are called multiple alleles. All these three genes or alleles are located on the same locus on homologous chromosomes. A person can have only two of these three genes at a time which may be either similar or dissimilar in nature. These genes control the production of blood group/antigens in the offspring. The gene which produces antigen A is denoted by Ia, gene for antigen B by Ib and the gene for the absence of both antigens by Io. it is customary to use the letter I (Isohaemagglutinogen) as a basic symbol for the gene at a locus. Based on this, six genotypes are possible for four blood groups in human population.

Genotype of blood groups in man.

The alleles Ia and Ib of human blood group are said to be codominant because both are expressed in the phenotype AB. Each produces its antigen and neither checks the expression of the other. There is codominance as well as dominant recessive inheritance in the case of the alleles for the blood groups in human beings. The alleles Ia and Ib are codominant and are dominant over the allele Io (Ia = Ib > Io). The human blood groups illustrate both multiple allelism and codominance. This blood group are inherited in the simple Mendelian fashion. Thus offsprings with all four kinds of blood groups are possible. If the parents are heterozygous for blood groups A and B which is shown below.

Cross between parents heterozygous for blood group A and B

(1) Rh factor : Landsteiner and Weiner (1940) discovered a different type of protein in the blood of Rhesus monkey. They called it Rh antigen or Rh factor after Rhesus monkey. When injected the blood of these monkeys into the blood of guinea pigs they noticed the formation of antibodies against the Rh antigen in the blood of guinea pigs. Formation of Rh antigen is controlled by dominant gene (R) and its absence by recipient gene (r). People having this antigen with genotype (RR or Rr) are called Rh positive (Rh+) and those whose blood is devoid of it with genotype (rr) are Rh negative (Rh–). About 85% human beings in Europe and 97% in India are Rh+.

(2) Importance of Rh factor : Generally human blood is devoid of Rh antibodies. But it has been noticed that on transfusion of blood of a Rh+ person to Rh– person, the recepient develops Rh antibodies in its blood plasma. If Rh+ blood is transfused for the second times it causes agglutination and leads to the death of Rh– person.

(3) Erythroblastosis foetalis : This disease is related to the birth of a child related with Rh factor. It causes the death of the foetus within the womb or just after birth. It was studies by Levine together with Landsteiner and Wiener. The father of Rh affected foetus is Rh+ and the mother is Rh–. The child inherits the Rh+ trait from the father. A few Rh+ red blood corpuscles of foetus in the womb enter in the blood of the mother where they develop Rh antibodies. As mother’s blood is Rh– i.e. devoid of Rh antigen, it causes no harm to her. These Rh antibodies alongwith the mother’s blood on reaching the foetal circulation cause clamping of foetal RBCs or agglutination reaction. The first child is some how born normal because by that time the number of antibodies in mother’s blood remain lesser but they increase with successive pregnancies. Thus the foetus following the first child dies either within the womb or just after its birth. This condition is known as erythroblastosis foetalis. So a marriage between Rh+ boy and Rh– girl is considered biologically incompatible.

Type of biological marriage on the basis of Rh factor

However, there is no danger if both parents are Rh– or mother is Rh+ and father is Rh–. Rh factor serum has been developed which when given to the Rh– mother after each child birth saves the next child. This serum contains Rh antibodies which destroy the Rh antigens of foetus before they can initiate formation of Rh antibodies in the mother. 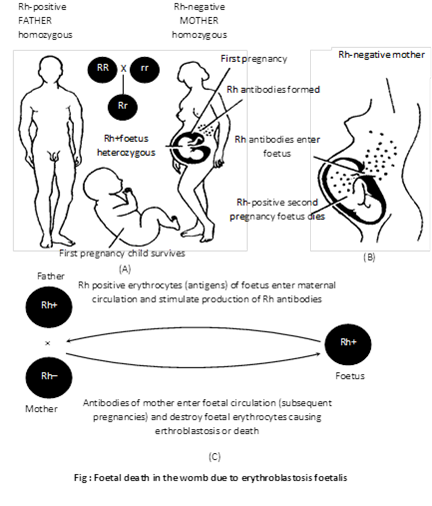 (4) Rhogam method : It is a method of preventing erythroblastosis foetalis. In this method the Rh– mother is given a special blood test after delivery of her Rh+ child. If foetal Rh+ cells are present in mother’s blood. She is given injections of rhogam. Rhogam is a preparation of anti-Rh antibodies. It is obtained from immunized donors. The rhogam forms a coat around foetal RBCs in mother’s blood. As a result no Rh+ antigens are available to stimulate mother’s circulation and no antibodies are formed.

(5) Inheritance of Rh factor : Rh factor or Rh antigen is determined by a series of four pair of multiple alleles. They are denoted as R1, R2, R0, Rz, r’, r”, ry and r. The alleles denoted by capital letter give rise to Rh+ condition while those denoted by small letter to Rh– condition. Rh+ condition is dominant over Rh– condition. Thus Rh+ person may be homozygous (RR) or heterozygous (Rr) while Rh– persons are always homozygous(rr). Hereditary trait for Rh– factor is inherited according to Mendelian principle. 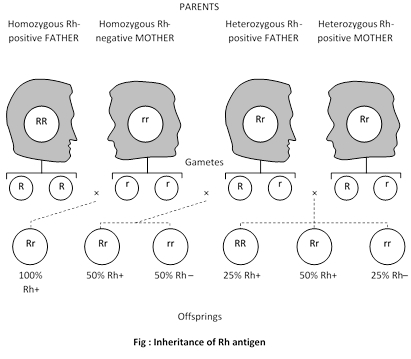