Term 'gene' was given by Johannsen (1909) for any particle to which properties of Mendelian factor or determiner can be given. T.H Morgan (1925) defined gene as ‘any particle on the chromosome which can be separated from other particles by mutation or recombination is called a gene. In general, gene is the basic unit of inheritance.

(1) Gene action: Gene act by producing enzymes. Each gene in an organism produces a specific enzyme, which controls a specific metabolic activity. It means each gene synthesizes a particular protein which acts as enzyme and brings about an appropriate change.

(i) One gene one enzyme: This theory was given by Beadle and Tatum (1958), while they were working on red mould or Neurospora (ascomycetes fungus). Which is also called Drosophila of plant kingdom. Wild type Neurospora grows in a minimal medium (containing sucrose, some mineral salts and biotin). The asexual spores i.e. conidia were irradiated with x-rays or UV-rays (mutagenic agent) and these were crossed with wild type. After crossing sexual fruiting body is produced having asci and ascospores. The ascospores produced are of 2 types -

(a) The ascospores, which are able to grow on minimal medium called ‘prototrophs’.

(b) Which do not grow on minimal medium but grow on supplemented medium called ‘auxotrophs’.

(2) Molecular structure of gene: Gene is chemically DNA but the length of DNA which constitutes a gene, is controversial 3 term i.e. cistron, muton and recon were given by Seymour Benzer to explain the relation between DNA length and gene.

(i) Cistron or functional gene or gene in real sense: Cistron is that particular length of DNA which is capable of producing a protein molecule or polypeptide chain or enzyme molecule.

(ii) Muton or unit of mutation: Muton is that length of DNA which is capable of undergoing mutation. Muton is having one or part of nucleotide.

(iii) Recon: Recon is that length of DNA which is capable of undergoing crossing over or capable of recombination. Recon is having one or two pairs of nucleotides.

(iv) Complon: It is the unit of complementation. It has been used to replace cistron. Certain enzymes are formed of two or more polypeptide chains. Whose active groups are complimentary to each other.

(v) Operon: Operon is the combination of operator gene and sequence of structure genes which act together as a unit. Therefore it is composed of several genes. The effect of operator gene may be additive or suppresive.

(vi) Replicon: It is the unit of replication. Several replicons constitute a chromosome.

(i) Transposons or Jumping genes: The term ‘transposon’ was first given by Hedges and Jacob (1974) for those DNA segments which can join with other DNA segments completely unrelated and thus causing illegitimate pairing. These DNA segments are transposable and may be present on different place on main DNA. The transposons are thus also called Jumping genes. Hedges and Jacob reported them in bacteria. But actual discovery of these was made by Barbara Mc Clintock (1940) in maize and she named them as controlling elements in maize or mobile genetic elements in maize. For this work, she was awarded Nobel Prize in (1983).

Note: q  About 10% of DNA of genome in primates and rodents is of this type.

In mRNA formed from split gene exons are present and not corresponding to introns. So in split genes, exons carry genetic information or informational pieces of split genes are exons.

Introduction: Defined as structure of nitrogen bases (nucleotides) in mRNA molecule which contain the information for the synthesis of protein molecule. It is discovered by frame shift mutation by Crick. 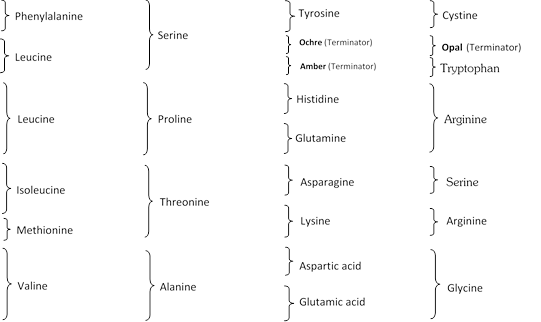 (i) Triplet: A single amino acid is specified by a sequence of three nucleotides in mRNA i.e. called codon. Due to triplet nature, it consist 64 codon.

(ii) Universal: A codon specifies the same amino acid in all organisms from viruses to human beings.

(iii) Commaless: There is no pause, so it reads continously.

(v) Initiation codon : The synthesis of polypeptide chain initiated by initiation codon, which located beginning the cistron i.e., AUG or GUG, which codes to methionine and valine amino acid respectively.

(vi) Termination codon: Termination is done by codon. These are UAA, UGA or UAG which does not code to any amino acid. These are also called nonsense codon.

(vii) Degeneracy: A single amino acid may be specified by many codon i.e., called degeneracy. Degeneracy is due to the last base in codon, which is known as wobble base. Thus first two codon are more important to determining the amino acid and third one is differ without affecting the coding i.e., known wobble hypothesis, which establishes a economy of tRNA molecule and put forwarded by Crick. Degeneracy of genetic code was discovered by Berrfield and Nirenberg.