An instrument used to measure the temperature of a body is called a thermometer.

It works by absorbing some heat from the body, so the temperature recorded by it is lesser than the actual value unless the body is at constant temperature. Some common types of thermometers are as follows

(1) Liquid (mercury) thermometers : In liquid thermometers mercury is preferred over other liquids as its expansion is large and uniform and it has high thermal conductivity and low specific heat.

(ii) Upper limit of range of mercury thermometer can be raised upto \[{{550}^{o}}C\] by filling nitrogen in space over mercury under pressure (which elevates boiling point of mercury).

(iii) Mercury thermometer with cylindrical bulbs are more sensitive than those with spherical bulbs.

Resistance of metals varies with temperature according to relation. \[R={{R}_{0}}(1+\alpha t)\] where \[\alpha \] is the temperature coefficient of resistance and t is change in temperature.

For Germanium resistance thermometer it is 4 to 77 K.

(4) Thermoelectric thermometers : These are based on ?Seebeck effect? according to which when two distinct metals are joined to form a closed circuit called thermocouple and the difference in temperature is maintained between their junctions, an emf is developed. The emf is called thermo-emf and if one junction is at \[{{0}^{o}}C,\] thermoelectric emf varies with temperature of hot junction (t) according to \[e=at+b{{t}^{2}};\] where a and b are constants. 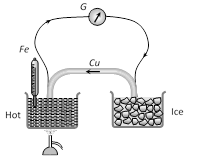 (5) Pyrometers : These are the devices used to measure the temperature by measuring the intensity of radiations received from the body. They are based on the fact that the amount of radiations emitted from a body per unit area per second is directly proportional to the fourth power of temperature (Stefan's law).

(ii) They cannot measure temperature below 800°C because the amount of radiations is too small to be measured.

(6) Vapour pressure thermometer : These are used to measure very low temperatures. They are based on the fact that saturated vapour pressure P of a liquid depends on the temperature according to the relation \[\log P=a+bT+\frac{c}{T}\]

The range of these thermometers varies from 0.71 K to 120 K for different liquid vapours. .